There they were all lined up at the big PBC on Fox event. WBC welterweight champion Shawn Porter, WBA Champion Keith Thurman, and IBF kingpin Errol Spence. Factor in Pacquiao/Broner is about to be officially announced next week. That’s four champions and a former champion, Danny Garcia, five major draws all scheduled to fight in the relative near future. Great news right? Wrong! Dead wrong! This is exactly what is wrong with our sport. Five great fighters, five possible hall of farmers all scheduling fights with the same advisor at around the same time and none of them anted up and demanded a fight with each other. How’s that possible? None of the top welterweights on the PBC side demanded they fight the best. The level of one-sidedness in many of these fights (Porter/Ugas outstanding) is sickening and not worth the entry fee. 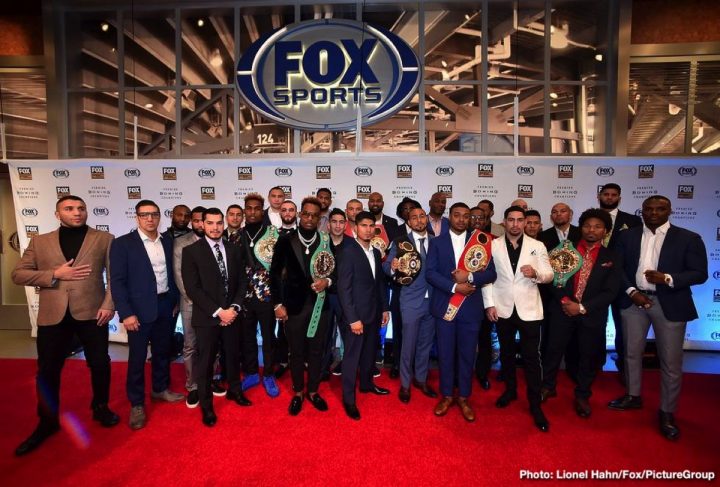 Shawn Porter and Errol Spence said that they both wanted the unification fight and that it would be the easiest fight to be made. So great we are getting a unification fight between porter and Spence, right? Of course not! Spence is fighting a lightweight for no reason at all. Porter did the reputable thing and is fighting his mandatory Yordenis Ugas in a fight that could go terribly wrong for Showtime, but we never criticize a champ for taking his mandatory, especially against a game fighter like Ugas! However, throughout history unification fights take precedence, Porter and Spence could have just as easily met up in March and Ugas been given his mandatory shot late summer early/fall. If this was cherry-picking by Porter it could be a terrible case of cherry picking gone wrong.

Spence, on the other hand, told Terence Crawford if he wanted smoke to go get that belt off of Horn, then trashed talked Bud, Spence also said that a unification with Porter is easy to make. Instead, he opted to fight a lightweight in a fight. This is a duck, a duck is a duck and this is a duck. Call out two champs in your division and then fight a dude two weight classes smaller. WBA champ Keith Thurman took a two-year maternity leave, he lied over and over again about when and who he would come back against, including saying he would fight Porter straight away with no tune-up. Well, that was a lie and Thuram opted instead to fight Josesito Lopez who isn’t a top 20 welterweight, so in a two-year span, Thurman’s only fight is against a 20-30 ranked welterweight! Great! That’s an embarrassment and the WBA needs to strip him. Given Thurman’s history of pathological lying, fans should be skeptical of this fight or any Thurman fight until the bell rings. We went through this last year with Keifey Poo announcing he was fighting last May at the Barclay’s and he still hasn’t fought anyone. Manny Pacquiao said he signed with PBC to only fight the best on that side of the fence to close out the final chapter in his career. So, of course, he did nothing of the sort opting to fight a guy that hasn’t won a fight in almost two years and has only won one fight at 147, ever in his career, and that was over five years ago against Paulie Malignaggi in a disputed SD. Way to go for greatness Manny, nothing says greatness like beating AB! And of course, former welterweight champ and jr welterweight champ Danny Garcia chose to fight a fighter in Adrian Granados whos last two opponents have a combined record of 32-29-3! We know how this ends too, Granados fights him tough and close and Swift walks away with a decision he probably doesn’t deserve.

Hardcore fans are going to be excited by these fights and this announcement by PBC and Fox but its ultimately a loss for the sport. Its what’s killing the sport! When the best fight the best its a win for the sport! Boxing fans win. When the best don’t fight the best its a loss for the fans and the best certainly aren’t fighting the best. Not even close, the best is clearly avoiding the best. Not only are none of the welterweights pursuing greatness they are all unanimously opting to take the easy path, fights we already know the winner (Porter/Ugas being the lone exception) and nobodies stock goes up as a result of any of these fights and that’s not good for the sport of boxing!