Anthony Crolla has now put together three consecutive victories since losing back to back fights against multi-division world champ Jorge Linares back in 2016 and 2017. Crolla won a WBA lightweight eliminator bout against Daud Yordan by wide unanimous decision. Crolla, who ran his record to 34-6-3 is now the mandatory to face WBA lightweight champ and pound for pound elite Vasyl Lomachenko. The Manchester native despite having previously held a 135-pound world title always operated just below the most elite level. Crolla was always viewed as a B or a B+ fighter. A game challenger but a clear underdog against any of the elite lightweights in the world. Still just 31-years-old  “Million Dollar” put together one of the most impressive overall outings of his career. Dominating the former world-class featherweight who was regarded as a top 10 lightweight at the time and has put himself in line for the biggest fight of his a career.  A fight with Vasyl Lomachenko will give him perhaps the biggest payday of his career and one last shot at the biggest stage and a final shot to elevate his name to the highest and most elite levels in the sport.

Crolla put on a boxing clinic on the undercard of Usyk/Bellew at the Manchester Arena. Crolla built up a big lead early on the cards, outworking Yordan and piling up points and putting rounds in the bank. Yordan hung tough and made it a grind down the stretch by applying constant pressure on the Englishman. The Indonesian landed plenty of heavy artillery and refused to make life easy. However, Crolla took his typical workers mentality and kept the work rate up and kept the precise punches flying in. Crolla threw beautiful combinations to the head and body throughout the fight. Firing to the head and then downstairs and back up to the head. Then side stepping before unloading more artillery. Putting on a textbook display of the sweet science. It was a vintage display of hit and not get hit by the British veteran he boxed beautifully coming forward at times and off the ropes other times. Giving Crolla a unanimous decision victory with three identical scores of 116-112. 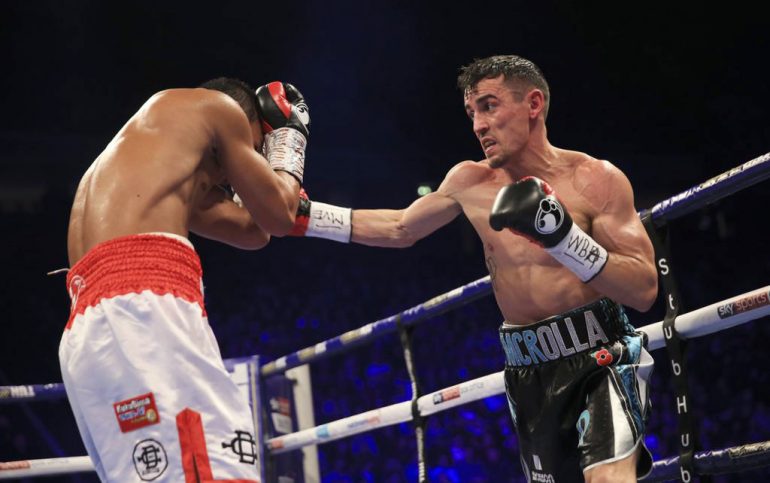 Crolla, looked like a million dollars against Durdan and as a result, has given himself a world of attractive and lucrative options. A fight with Lomachenko is available to him whenever it is mandated. If he doesn’t want to wait around for Loma, a rematch with Ricky Burns is another lucrative option, as is the third fight with Jorge Linares. Fellow countrymen Luke Campbell is another option as is Louis Ritson who is coming off a loss. One thing we’ve learned about Eddie Hearn is he likes to keep his fighters active. When you stay active a loss isn’t devastating to your career. That has been the case with Crolla and will have to be true for Ritson as well. A potential fight between the two would be a crossroads battle, a must-win for both men as well as a very interesting contrast in styles. Whatever Crolla opts for next is completely up in the air. he has however guaranteed himself one more big payday on a big stage.