Once in a great, while a fight comes along that gets fight fans salivating in anticipation of an unforgettable brutal slugfest. Even more rarely does such a fight meet the high expectations. When Miguel Berchelt was scheduled to defend his title against Miguel “Mickey” Roman, boxing hardcore’s figured they were in store for something special.  Two rugged come forward Mexican brawlers who leave it all on the line and push for the knockout. Saturday nights WBC super featherweight bout between the two did not disappoint in the least. Miguel Berchelt picks up the fighter of the week award for his championship performance in El Paso, which he described as the toughest title defense of his career. The 27-year-old champ from Cancun put on a sensational performance in outslugging the game roman early in a very hotly contested opening few rounds where Roman was landing often and cleanly but Beltran certainly appeared to be getting the better of it. As the early rounds turned into the middle rounds the bout was no longer a contest and became one-sided target practice for “Alacran” who dropped Roman a total of three times en route to a ninth-round knockout victory to retain his 130 pound world title for the fourth time in the main event of the Top Rank card. 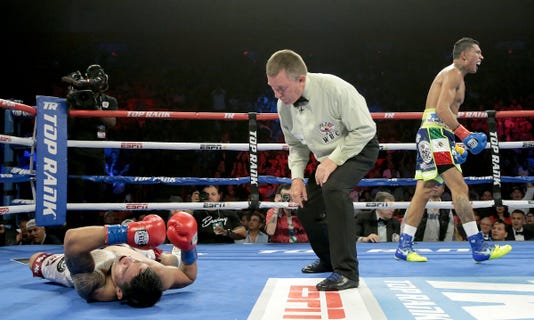 After the fight Beltran tipped his hat to the game Roman saying “I want to thank Mickey Roman for being such a valiant warrior,” speaking through an interpreter. “This was the toughest of my four world title defenses. It was tougher than [Francisco] ‘Bandido’ Vargas; it was tougher than Takashi Miura; tougher than any other fight. So, first off, I want to give my respect to Miguel ‘Mickey’ Roman as an opponent.” much respect in the end for a fight that lacked respect in the build up the two exchanged heated words guaranteeing wins and a brutal war the bad blood lead right up until the final instructions from the referees final instructions when the two refused to touch gloves. If Beltran had any shortage of respect for his opponent that quickly changed as Roman rocked the champ in the second round and Beltran came storming back before taking control of the fight in the third round. 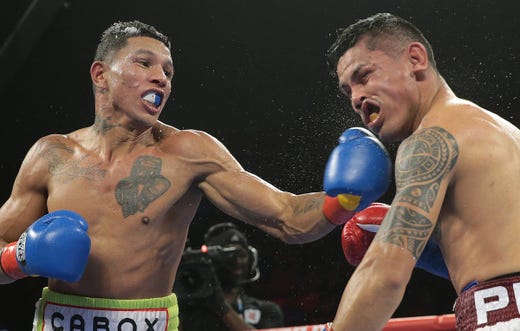 In the post-fight interview, Beltran acknowledged “There are great champions in the division: Tevin Farmer (IBF), Alberto Machado (WBA), Gervonta Davis (super champion WBA) and Japan’s Masayuki Ito (WBO). I think people would like to see unification” Any one of those fights would be an entertaining scrap, however we know that as with any Top Rank fighter, Bob Arum likes to keep the money in the Top Rank circle and in this instance that a good thing for fight fans, as multiple reports have said its more likely than not that Beltran and WBA lightweight champ Vasyl Lomachenko who will likely have added the WBO strap by years end. Lomachenko who is quite small for the lightweight division would be open to taking the fight at either 130 or 135 pounds according to multiple reports. A Lomachenko scrap could be a stylistic challenge which could potentially spell disaster for the pound for pound Ukranian and propel Beltran’s stock to another stratosphere.