3DBoxing is honored to announce our first multiple-time winner of the ever coveted Fighter Of The Week award!  The award was first handed out in July so a multiple time winner is fairly impressive. Tevin Farmer won the award the first week of August when he captured the IBF super featherweight strap against veteran Billy Dib and has won the award again just over two months later making his first defense of the belt against James Tennyson on the Andrade/Kautondokwa undercard at the TD Garden in Boston. As good as farmer looked back in August in winning his world title, and he looked really good, he looked far better in Boston in dominating and stopping the veteran Tennyson. Tennyson was coming off a career-best victory in stopping previously unbeaten prospect Martin Joseph Ward. Tennyson was expected by many to present a major challenge to Farmer. This was not to be. 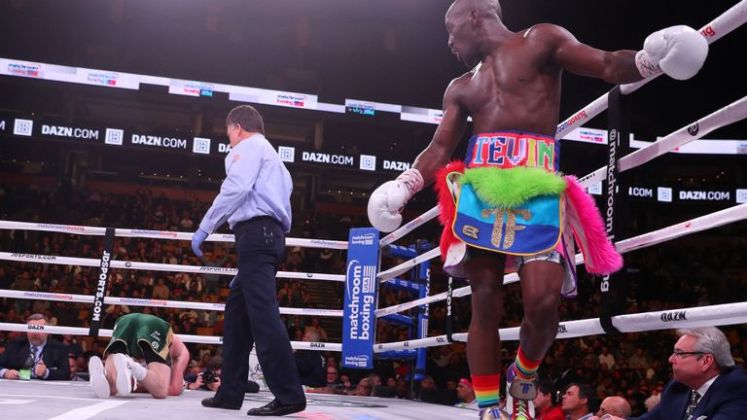 Farmer dominated the fight from the opening bell on scoring with a body attack that would have made Errol Spence proud, as well as lightning quick left hands that landed one more squarely than the next and showing off the masterful defense and footwork that we have grown to expect from Farmer. The southpaw from Philly dazzled Tennyson with a combination punching and avoided the much slower and wide hooks that Tennyson was launching. The difference in hand speed was noticeable from the opening moments of the bout until its brutal finished. Farmer not known for his punching power landed a thudding left hand to Tennyson’s ribs in the fourth round that sent him tumbling to the canvas. The game challenger was able to get to his feet and survive the round. However, things went from bad to worse for the Challenger from Northern Ireland as the champ landed yet another thudding left hand to the body that buckled his opponent and then landed another massive left to the body that put Tennyson back down to the canvas and this time for good as referee Arthur Mercante waived the bout off. Running Tevin Farmer’s record to 27-4-1 (6).

Farmer as always was not quiet after the fight saying  “I’m the best fighter in the world. I haven’t proved it yet but watch. I can’t even explain it. It’s unexplainable. I’m not even supposed to be here” Farmer, the IBF champ, then took the opportunity to call out the undefeated  WBA champ Gervonta “Tank” Davis. Davis, who is currently having promotional issues, has expressed interest in a fight with Farmer in the recent past, Farmer already has another scheduled date for December 15th at Madison Square Garden on the Canelo/Fielding undercard. It will be another quick turnaround for Farmer and his third fight in four months, and the biggest challenge of Farmers Hollywoodesque career.