Certain cities are associated with a history of great boxers. At the very the top of that list is New York City. which was the home to legends such as Jake LaMotta, Mike Tyson, Benny Leonard, Buddy McGirt, Iran Barkley, Floyd Patterson, Junior Jones, Riddick Bowe, Joey Archer, Mark Breland, and the list goes on and on. It has been a while since the most populated city in the country produced a truly great fighter. The city that never sleeps has produced plenty of pretty good fighters, solid fighters, who have put together really solid careers. Fighters like Sadam Ali, Paulie Malignaggi, Danny Jacobs, Zab Judah have all hail from the greatest city in the world and put together very formidable careers capturing many world titles. However, it’s been a while since NYC has produced a truly great fighter!!!! And Just like New York cities two football teams, Cinderella Man and Frank Sinatra, the cities next great attraction is actually from New Jersey and not New York. Stevenson hails from the legendary Brick city AKA Newark, which is about 15 miles due west of Manhattan.

The Olympic silver medalist and Newark’s favorite son took the biggest step up fight of his career against rugged and tested veteran Viorel Simion in the co-main event of the Top Rank card on ESPN which was headlined by Terence Crawford/Jose Benavidez Jr. Simion a tough Romainain fighter who lost a competitive 12 round decision to Scott Quigg in his last outing and has also been in the ring with Lee Selby, had never been knocked out or even knocked down. That streak came to a grinding halt last night in Omaha, Nebraska as he was utterly destroyed and dominated by the young Stevenson. Many had questioned the punching power of the New Jersey native after not being able to stop the likes of Carlos Ruiz and Juan Tapia in recent months. The all-world featherweight prospect more than answered those doubters. Stevenson floored Simion with a picture perfect right hook early in the opening round that dropped and badly hurt Simion. A shot the rugged Romainain was perhaps never able to recover from. Soon thereafter, Stevenson dropped his man for the second time with a lethal flurry of power shots. Right before the opening stanza ended Stevenson again clobbered Simion with a right hook and gain flooring Simion, who was able to beat the count, but had the fight waived off as he legs were still wobbly. 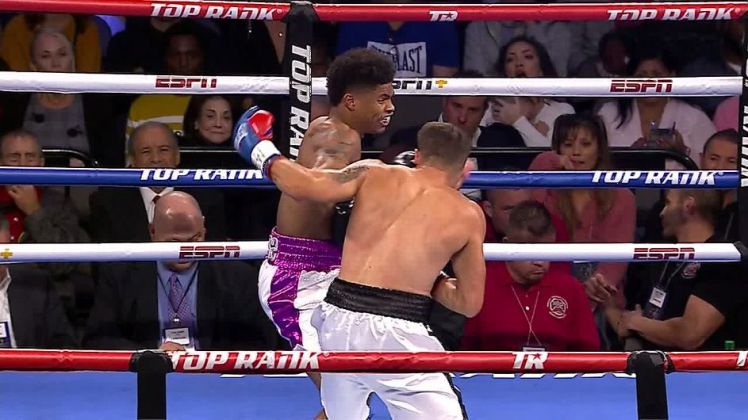 The New Jerseyite ran his record to a perfect 9-0 (5) and certainly has a bright future, he has the power, speed, and the smile to excel and excel quickly and make a ton of money doing so. Stevenson is highly motivated in calling out both Josh Warrington and Lee Selby in the UK he certainly doesn’t lack any confidence and already has a world class name on his resume in destroying Simion in one round. Being signed to Top Rank, being handles by in Andre Ward and others and having the full faith and credit of ESPN behind him the sky is the limit. The only question is how quickly will his team want to move him along and whether or not he is a 126 or a 130 pounder. He is just 21 and weighed in at 128, was this more because Simion took the fight on short notice? Or was it more because he has the drain himself to make the weight? That is something that his team will have to decide.

Regardless of the division that Stevenson fights in there are plenty of opponents for him to throw down with. Miguel Berchelt is with Top Rank and is perhaps the best Super Featherweight in the world and maybe the ultimate prize for Stevenson. Tank Davis is also in the weight class as is a NJ/Philly rivalry showdown with Tevin farmer. A fight with Albert Machado at the Garden or at the Prudential Center in Newark would do big things at either venue. If he can stay at the featherweight division as we would like to see him do. A showdown could be prepped with fellow 21-year-old mega-prospect Brandon Figueroa of Weslaco Texas, all though that may be too big a risk and too big a test for either man or both men at this particular time, a fellow Texas featherweight, Ray Ximenez who dropped a robbery of a decision to Chris Diaz would be a great matchup for Stevenson and a great next step. A fight that would fast-track the winner to the biggest prizes in the 126-pound division which would be one of the big three in the division, Gary Russell Jr. Leo Santa Cruz and Carl Frampton all three are current world champions in the featherweight division.