We at 3DBoxing have long sung the praises of Showtime’s SHOBOX series, it is without a doubt my favorite show on TV today. I have even gone as far as to compare it to the legendary USA program Tuesday Night Fights which was my favorite television program in my adolescent years. I remember rushing home from the Atlantic Memorial Boxing Club every Tuesday night to start watching USA’s weekly boxing program. It was a program that showcased the new era of young fighters and gave veteran fighters a stage to try to rebuild and get back to the highest level. This past Friday’s edition of SHOBOX had all of these attributes in spades. Two veterans standing in the middle of the ring and a teenage prodigy wowing the crowd.

The first fight on Friday’s televised card was a Super Middleweight bout between a young 24-year-old- upstart and an undefeated veteran who got a late start and was fighting to create his own break before running at of time and did they ever produce fireworks. If the names were perhaps better known Cem Kilic of Frankfurt Germany and 30-year-old firefighter Deandre Ware, this war may be considered fight of the year it was that good. They two traded hard shots to the head and body from the opening bell on fighting and a lightning-quick pace through the first half of a fairly even fight it appeared. In the last three rounds, Kilic seemed to pull away clipping ware with a short right hand that wobbled Ware and seemingly making Ware feel his power for the first time. Again Ware was staggered at the end of the seventh when Kilic cracked him with a straight left hand that snapped his head back and buckled his knees again. Killic seemingly put a fight that was closer than the cards suggested on ice by winning an entertaining final stanza by landing pinpoint right hands. Killic took a wide UD probably due to his work rate by scores of (79-73, 79-73, 78-74). In the second televised bout, Zhora Hamazaryan tried to revenge what many considered a bogus loss to Thomas Mattice two months ago. The two put on a back and forth struggle where each fighter had moments. Hamazaryan hurt Mattice badly in the fourth and trying to end the battle in the final round picking up the pace and going for the knockout. However, Mattice was able to survive and had plenty of sports of his own throughout the fight specifically in the sixth round landing a devastating uppercut that hurt Hamazaryn putting together his best round of the fight just when it appeared he needed a rally.

In the main event, Devin Haney put on a show for the packed crowd at the Pechanga Resort & Casino, in Temecula, California. Haney, a teenager, dominated rugged veteran Juan Carlos Burgos who has three times challenged for a world title including going the distance with Mikey Garcia. Haney toyed with Burgos for the majority of the fight causing Burgos to grow frustrated at times and drop his hands. The offensive attack of Haney is truly something to behold, firing lightning quick double-jabs and laser-like counter right hands. As well as a knack for fighting on the inside landing counter right hands one after another from out of the shoulder roll defense. The footwork and footspeed were mesmerizing not allowing Burgos to cut the ring off of him while still leaving Haney is a position to land squarely and consistently throughout the 10 round fight and to get into positions where Burgos couldn’t possibly land on him. Haney demonstrated that he does have power to go along with the speed, and reflexes hurting the veteran badly in the fifth and nearly stopping his outmatched opponent but couldn’t get the rugged Burgos out of there. Instead pitching a shout out on two fo the scorecards and winning on the third card 97-93, which is immaterial but unspeakably bad, after the first round Burgos didn’t win a single moment of the fight. The future is bright and having dominated two higher level fighters in Menard and now Burgos in his last two fights he looks like he is certainly ready to step up to a championship level. The only question is at 130 or 135 pounds? Haney is also self-employed, he promotes himself alongside some guidance from his dad William Haney so all options will be on the table. 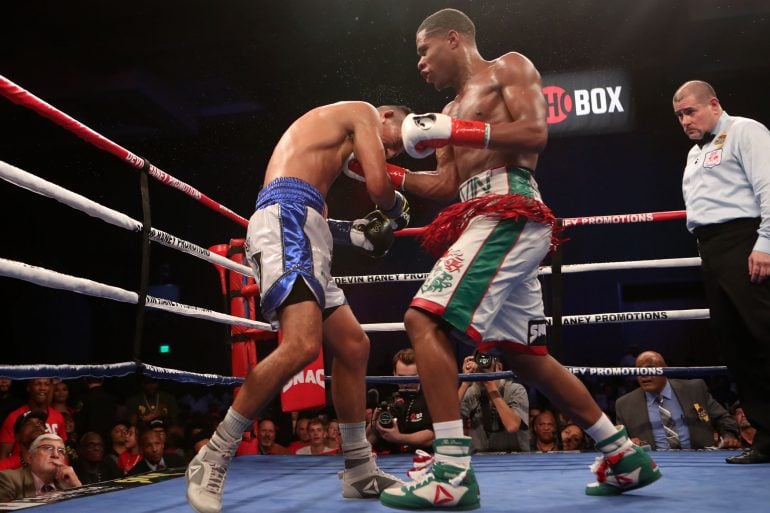 Showtime SHOBOX is the best outlet for hardcore to see the newest and upcoming talent it also produces non-stop action by hungry fighters looking not to cash in on a huge payday but to earn one and this is a nationally televised spot to do just that. To the folks at CBS/Showtime please make the SHOBOX series a weekly or bi-monthly program that the next generation of boxing fans can set the watch to and rush home too just as I did 20 years ago for Tuesday Night Fights there are enough hardcore to support making this a regular program and it will build the next generation of fight fans.