Certain memories are burned into your brain, memories that can never be forgotten. Memories that are decades old but can be recited as if was yesterday. In my 35 years of life, the one event that stands above all others, burnt into my memory forever, standing on the 13th floor of my Hofstra University dormitory on 9/11 2001  watching the greatest city in the world burn. Scratching my head wondering what just happened. Life in New York City hit a pause everyone frantically searching to make sure their loved ones were alive and well. Unable to contact many of them as cell phones and internet were largely inoperative in the following days. I remember in the days following seeing card parked at the Hempstead train station, which is a big commuter line for people from Long Island to New York City and days later thinking “wow those cars have been parked in the same spot for a week now, the owners of those cars aren’t coming back to retrieve their cars” Everything in the city that never sleeps, stopped momentarily. Among that was the New York City sports scene the Mets, Yankees, Jets, and Giants all had their seasons temporarily halted. Madison Square Garden, the worlds most famous arena, is the epicenter of the NYC sporting scene and was home to The Hopkins/Trinidad middleweight unification fight originally scheduled for September 15th, 2001. Just four days after the devastating terrorist attacks, the event was delayed two weeks to September 29th, making it the first major sporting event in Manhattan since the attacks. 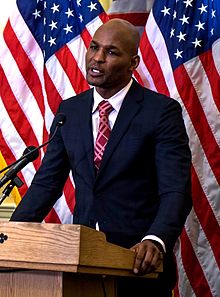 The fight was highly anticipated as it was not just going to crown an undisputed middleweight champ it was also going to mark a return to normalcy, the return of boxing to the mecca of boxing and New York City residents and tourists returning to life as normal or as close to normal as possible. Bernard Hopkins entered the fight as the 36-year-old  IBF and WBC middleweight King. B-HOP had made 12 consecutive title defenses of his middleweight strap this would mark his 13th successful defense, tying him with Carlos Monzón for record defenses. Hopkins won his IBF title back in 1995 in a rematch against Segundo Mercado and added the and added the WBC title by pitching a near shout out against Keith Holmes in April of 2001.  Felix Trinidad captured Welterweight gold  at just 20- years old by destroying Maurice Blocker and then running through the division defeating Hector Camacho, Oba Carr, Yori Boy Campos, an over-the-hill sweet pea Whitaker and ultimately Oscar De La Hoya  among others before jumping up to 154 and  capturing the IBF belt by outpointing David Reid and defending it twice including in a 2000 fight of the year candidate by stopping Fernando Vargas via 12th round TKO and then became a three-division world champ by stopping William Joppy in the 5th round of their may 2001, showdown. 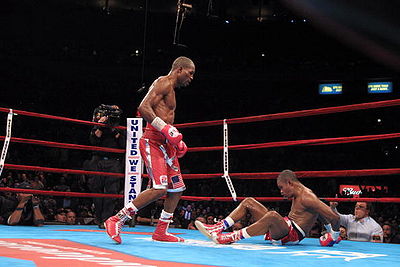 The fight opened slowly, in the early rounds the two middleweight chams carefully feeling each other out and staying away from one another. Hopkins struck first landing a big overhand right that rang Tito’s bell just before the bell rang to end the second round. Building on the momentum Hopkins begins to get comfortable and brought the fight to Tito, not something people were expecting the 36-year-old to do with the hard-hitting. Scoring jabs and straight right hands at will forcing Tito to pick up the action and leading to excellent combustion in the fourth round, the best round of the fight, with each man landing big power shots. Trinidad, has his best round in the sixth, backing Hopkins against the ropes and landing multiple left hooks. It is the first round that clearly goes to Trinidad. Causing Hopkins to slow the pace again in the second half of the fight
Hopkins remains the more mobile fighter, moving away from Trinidad’s power.  As Hopkins turns the combustion into a chess match  Hopkins I begins to outclass Trinidad and scoring clean combinations one after another and making Trinidad miss widely with big shots. Trinidad senses to be in trouble and come out shot out of a cannon to start the tenth. Apparently punching himself out and leaving him subject to huge shots by Hopkins stunning Tito with a right to the chin as the bell sounded. The Puerto Rican champ was never able to recover from that shot and it marked the beginning of the end, Trinidad comes for the eleventh on very shaky legs and never got them back.  Midway through the final round, Hopkins connects with yet another huge right leaving  Trinidad folded up on the canvas. Felix Trinidad Sr., Tito’s father, and trainer jumped into the ring to call a halt. Making Hopkins the undisputed middleweight champion. 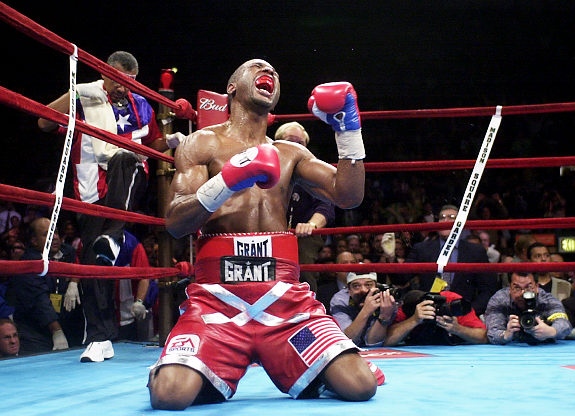 Hopkins, who ran his career 40-2-1 (28) and was on his way to becoming one of the greatest Middleweight champions of any era. He would not only go on to defend his titles against the likes of William Joppy, Oscar De La Hoya and Howard Eastman but also went on to capture multiple middleweight titles and became the oldest man to ever capture a major world title when he outpointed Jean Pascal. Hopkins retired for good in December of 2016 with a record of 55-8-2 (32). Trinidad was never quite as good and would never go on to win another world title, he did pick up two decent wins against Ricardo Mayorga and Hacine Cherifi before losing every minute of every round to Winky Wright in 2005 and coming back in 2008 to lose a lopsided decision in a 170 pound catchweight fight to Roy Jones Jr. and retiring for good with a record of 42-3 (35).