Few fighters come along that create such a buzz and garners the respect of every fight fan across any and all nationality and ethnic lines. Rarer is that such a rare fighter in one of the smaller weight classes that typically don’t garner mainstream attention. One of these rare fighters is Erik “El Terrible” Morales. Morales and his star begin to rise internationally on September 6th, 1997. This week in boxing 21 years ago “El Terrible” captured his first world title. The Mexican icon traveled to El Paso, Texas to challenge future Hall of Famer Daniel Zaragoza.  At just 21-years of age, Morales defeated his first hall of fame caliber fighter and captured his first world title. A feat he would accomplish over and over again during his illustrious career.

By September of 1997, Daniel Zaragoza had not only captured the WBC Super Bantamweight title but had put together a legendary career and a record of 55-7-3 (28). The then 40-year-old Mexican champ had compiled victories over Wayne McCullough, Hector Acero Sanchez, Kiyoshi Hatanaka, and Carlos Zarate among many, many others. Zaragoza had established himself to be one of if not the best 122 pounders of any era. He had also captured a strap at 118 before his legendary run at 122. In the other corner, Morales was determined to dethroned “El Raton” and start a new era, a new reign of Mexican Super Bantamweights. The El Terrible reign. Morales at this point accumulated a record of 26-0 (21)  and was just 21 and not yet in his physical prime too soon for a world title shot especially against a ring legend like Zaragoza? 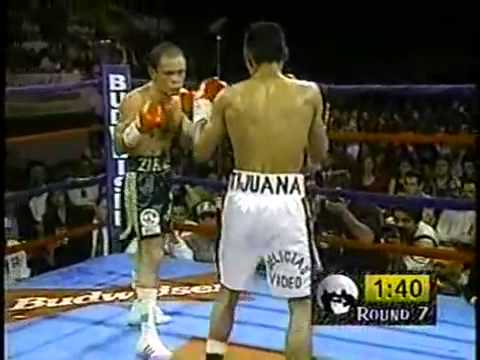 The County Coliseum in El Paso, Texas was the scene for the legendary event which aired on HBO. The opening rounds were close, and saw uncharacteristically, Morales start conservatively. In round 3, Morales picking up the pace, walking Zaragoza back and connecting pinpoint laser-like right hands, driving the champion into the ropes and landing a hard left just before the bell. He had certainly got the attention of the veteran world champion. Morales appeared content to box Zaragoza and believed he was winning rounds with his jabs and straight rights. However, that seemed to change at the end of the fourth when one of the champion’s haymakers finally got home. A wild right hand came over the top and landed flush on the challengers’ jaw, buckling his knees. Zaragoza jumped on the youngster and the two traded with abandon until the bell,  In the fifth an a supremely confident Zaragoza picked up the action, making Morales fight off the back foot. Morales seized control again in round six with a perfectly placed counter left-hook. The fight became an epic Mexican war. An accidental clash of heads opened a small cut on Zaragoza who was drawing warnings for low blows and hitting on the break. The champion kept rushing Morales, forcing him back, but another hard left hook at the end of the round stunned the champ. Morales seemed to be fatigued in round seven and perhaps a bit in over his head as Zaragoza kept up the pressure. Seeing his title dreams slipping away Morales came out like a bull in a china shop in round eight, throwing big right hands, one after another and staggered the legendary champ. Zaragoza was  Staggering around the ring, badly hurt,  trying to rally and launching massive shots trying to return fire as the bell sounded. Zaragoza visibly drained by round ten, Morales was constantly beating him to the punch again and again. Three sharp rights to the head and then a thunderous right to the body dropped  Zaragoza, who courageously rose to his feet and, tried to force the action again.  But really had nothing left. Morales was connecting at will as the bell saved the champion to end the 10th. Morales appeared fired up and confident to end the 10th and start of the 11th. Morales stayed in control and executed the kill perfectly landing his right hands and uppercuts.  With a minute left the end came quickly. El Terrible landed one last huge right to Zaragoza’s midsection, the force of the blow put the future hall of famer  on the canvas and in a sitting position,  humbly waiving his  fist at Morales  in a gesture of him passing the crown to the new champ as Zaragoza was counted out and sent into retirement by Erik “El Terrible” Morales.

Zaragoza vs Morales was regarded as Morales’ coming out party, his first chance at a world title and his introduction to American boxing fans. It was the first moment of note which caught the attention of both the American fight fans and fight fans all over the world. The beginning of a hall of fame career of his own that featured wins over Manny Pacquiao, Junior Jones, Marco Antonio Barrera, Carlos Hernandez, and Paulie Ayala among a laundry list of other top-notch fighters. Morales retired for good in 2012 with a record of 52-9 (36) defeating a total of 15 world champions and was inducted into the International Boxing Hall of Fame in 2018