The heavyweight division is once again grabbing headlines. It’s been a while since the division was of interest to the mainstream American media but with the top loaded talent that is beginning to change. Love him or hate him Deontay Wilder is the WBC heavyweight champ and due to his tremendous right hand and his gift of gab he is a draw. His fight with Tyson Fury will do solid if not spectacular PPV numbers and all of that will lead up to the biggest fight in the sport. The lineal and WBC champ whether it be Wilder or Fury against unified champ Anthony Joshua. The action in the heavyweight division is certainly becoming exciting, but do any of these three men, Wilder, Joshua or Fury have what it takes to become an all-time great heavyweight champ? Now seems like a perfect time to rank the top 10 greatest heavyweights of all time 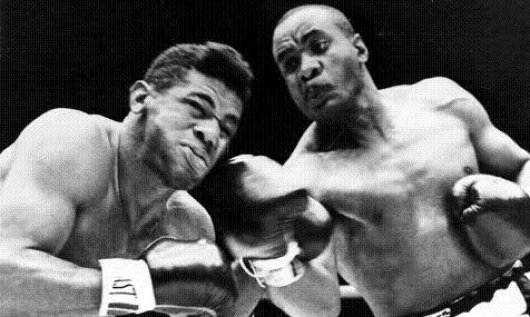 10- Sonny Liston- Perhaps the most feared man on this list Liston compiled a record of 50-4 (39) during his career (1953-1970) Liston was regarded for his toughness, one-punch power, long reach, and intimidating appearance. Liston scored quality victories over Cleveland Williams, Roy Harris, and Zora Foley none of whom were able to last three-full rounds with him.  All of this set up his world title-winning performance, a first-round knockout of legendary champ Floyd Patterson, a feat he would duplicate 10 months later. In his next two fights, he was stopped by Cassius Clay. Liston was never to win the heavyweight crown again but secured a few more high quality wins.

9- Joe Frazier- A 1964 gold medalist “Smokin Joe” was known for his relentless come forward style and his world renown left hook. Frazier put together wins over Oscar Bonavena, Jerry Quarry, Jimmy Ellis, and Bob Foster and picking up both heavyweight straps along the way. Setting up his fight for lineal supremacy against Muhammad Ali in March of ’71, perhaps the most famous fight in boxing history. A fight Frazier took a wide decision over “The Greatest” and landed perhaps the most famous punch(left hook) in heavyweight history. Frazier would make two more defenses of his title before being knocked out by George Foreman. After losing his title Frazier would lose twice more to Ali but picked up another win over Quarry and Ellis for a career record of 32-4-1 (27)

8- Rocky Marciano- Competing for just eight years at the professional level, Marciano compiled the infamous 49-0 record including 43 wins by knockout. Marciano was known for his one-punch power, stamina and granite chin. He won the world title in 1952 picking himself up off the canvas and behind on all three scorecards landing a  famous right hand on Jersey Joe Walcott’s chins that ended the night. Marciano would defend his heavyweight crown a total of six-times before calling it quits in 1955

7- Evander Holyfield- The “Real Deal” was simply a blown up cruiserweight who was too small to become heavyweight champ. Holyfield is the only four-time world heavyweight champion, holding world titles on and off again from 1990-2001 compiling a career record of 44-10-2. He famously beat Buster Douglas to capture his first every heavyweight title and defended it against Larry Holmes, and George Foreman among others, he won his second world title by avenging his first career loss and out-pointing Riddick Bowe. His third world title was among the great upsets in sports history an 11th round TKO over Mike Tyson in November of 1996. Holyfield opened up a 30-1 underdog. He won another version of the world title by taking a decision over John Ruiz in 2000.

6- Jack Dempsey- The first world-famous heavyweight champ. Dempsey competed from 1914 to 1927, becoming heavyweight champ in 1919 by knocking out Billy Miske in three rounds. He defended the title a total of five times most notabley against Louis Firipo and Jess Willard. Before losing it to Gene Tunney in front of 120,000+ fans at the Sesquicentennial Stadium in Philadelphia. Dempsey would go on to pick up another high-quality win over Jack Sharkey before calling it a career in 1927 with a record of 54-6-9 (44)

5- George Foreman- Big George was one of the most feared punchers in any era in any division. Compiling a career record of 76-5 (68) and capturing a gold medal. Foreman’s pro career started in 1969 and he ran off a record of 37-0 when he meets up with Joe Frazier in a battle of unbeatens for the undisputed heavyweight crown. Foreman would knock Frazier down a total of six-times on his way to picking up a second-round TKO. Foreman defended his title just once before meeting up with Ali and losing his title in a shocking comeback. Big George picked up big wins over Ron Lyle and a second win over Frazier before hanging it up for a decade. His comeback was legendary and saw him capturing the worlds heavyweight title by knocking out Michael Moorer in the 10th round. 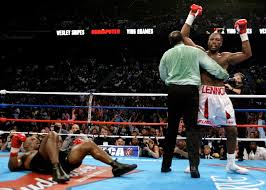 4- Lennox Lewis- A 1998 Olympic gold medalist Lennox Lewis went on to capture a version of the heavyweight title three times. First in 1992 when Riddick Bowe famously threw it in the garbage. He won the title again in 1997 in an odd incident in against Oliver McCall and for the third time in 2001 revenging a defeat he suffered at the hands of Hasim Rahman. Lewis cleaned out a generation of fighters including Mike Tyson, Evander Holyfield, Ray Mercer, David Tua, Razor Ruddock and at the age of 37 defeated Vitali Klitschko crossing over and beating the next generations great world champ. Lewis compiled a record of 41-2-1 (32). Lewis successfully defeated every opponent he stepped in the ring with.

3- Joe Louis- The “Brown Bomber” reigned as the world heavyweight champion from 1937 to 1949 a championship reign lasted 140 consecutive months. Louis won the title at Madison Square Garden stopping John Henry Lewis in one round. He defended the world title a total of 20+ times against the likes of Jersey Joe Walcott twice, Billy Conn, Buddy Baer and Tony Galento among others. Louis finally lost his title at the age of 36 to Ezzard Charles. After the setback, Louis fought on and picked up additional quality wins over Jimmy Bivens and Lee Savold and twice over Cesar Brion of Argentina twice. Louis hung them up for good in 1951 with a final record of 66-3 (52).

2- Muhammad Ali- “The Greatest” ranks as only the second greatest on our list. Ali was the first man in history to capture the heavyweight title three different times. First capturing the heavyweight crown in 1964 by knocking out Sonny Liston. Ali won the title again in a decade later by shocking George Foreman in Zaire. Ali won in a third time avenging a previous defeat by outpointing Leon Spinks. In addition to capturing the heavyweight title three times and compiling a record of 56-5 (37) as well as a 1960 Olympic Gold medal, Ali also scored victories over Norton and Frazier twice also besting Erne Shavers, Jimmy Young, Bob Foster Floyd Patterson, Zara Foley and Erie Terrell amongst many other elite level heavyweights of the era.

1- Larry Holmes- The Easton Assassin was once the sparring partner for the number two guy on this list. He’s come a long way from being someone’s partner. Holmes whos jab is considered the best ever by experts and pundits, accumulated a career record of 69-6 (44) started his pro career in 1973 and ran off 26 straight. Setting up a WBC Title elimination fight with hard-hitting Ernie Shavers. Holmes dominated the fight with his jab in a near shut out performance. In his next fight, Holmes captured the WBC title in an epic battle with Ken Norton. Holmes would make 20 consecutive title defenses, besting the likes of Tim Witherspoon, Tex Cobb, Renaldo Snipes, Trevor Berbick and Leon Spinks running his record to 48-0 before dropping two highly questionable decisions to Michael Spinks. Holmes would attempt a comeback in 1991 and picked up a few more decent wins before finally calling it a career in 2002.