On August 12th, 2000, Evander Holyfield and John Ruiz met up for the vacated WBA heavyweight strap. A belt that was stripped from Lennox Lewis, who defeated Evander Holyfield for the strap, when Lewis refused to face John Ruiz who was the #1 mandatory challenger for the belt, instead opting to take a bigger payday against a massive American prospect at the time, Michael Grant. The WBA and Lewis originally agreed that Lewis would fight Grant then Ruiz. However, Ruiz’s famous promoter Don King challenged the decision. He found a clause in Lewis’ contract that stated the winner of the Holyfield–Lewis fight would first defend his titles against the WBA’s number one contender. Because of this, Lewis was stripped of his WBA strap. The WBA then opted for Holyfield to face Ruiz for the vacant belt. 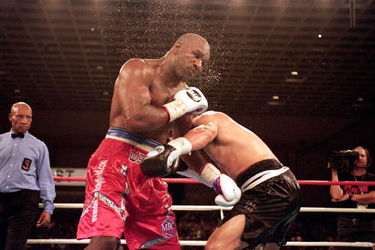 Evander “Real Deal” Holyfield was looking to become the first ever four-time heavyweight champion of the world. The Real Deal was now 37, nearly 38 years old. However, there was still reason to believe that Holyfield had some gas left in his tank. In his last outing, he mustered up a great effort in dropping a decision to Lennox Lewis. A performance that many contest that Evander was the rightful winner of, and that in reality, he should have made him the legitimate undisputed heavyweight champion. However, Lewis was awarded the very close decision and if Evander could win this fight a trilogy with Lewis was the next logical step. For the 28-year-old Ruiz, he had earned the mandatory position by stopping heavyweight contender Thomas Williams in the second round in his previous outing. Ruiz had accumulated a record of 36-3 and put together 11 straight victories, since being destroyed by David Tua in less than one round in 1996 run that included victories of some solid opposition in James Thunder and Tony Tucker. To garner him the number one spot and the shot at the vacated belt.

Ruiz controlled the early action with an effective use of his jab. The Quincy, Mass native was equally surprising the crowd who came to see Holyfield make history and use this performance as a gauge to see if he would be effective in a Lewis trilogy. Seemingly, losing the first two rounds Holyfield hurt Ruiz late in the third round with a right hand and an uppercut. He jumped on Ruiz who was trying to weather the storm the legend smelled the end was neat and gunned for the finish. However, while the killer instances were still visible one couldn’t help but notice that Holyfield didn’t have the next gear and was unable to finish his hurt opponent. Ruiz, bounced back nicely in the fourth round staggering Holyfield momentarily with a big sweeping right hand. A right hand that established two things. First, even though he was a somewhat unknown and 4-1 underdog he wasn’t going away and this was going to a heavyweight fight and second that the “Real Deal’s” reaction time and reflexes ain’t what they used to be. Holyfield looked lethargic and slow while being outworked by Ruiz, commentator Bobby Czyz noted there may be something wrong with the former champ. Ruiz was constantly beating Evander to the punch seemingly taking a lead on the scorecards through the first five rounds or so. The heart that made Evander Holyfield a legend of the sweet science was not about to be denied. Holyfield came back strong in the sixth round with a jab-hook combination that caught Ruiz’s attention. Holyfield was grinding away while Ruiz was trying to move and keep Holyfield off of him with the jab. The second half off the fight was a constant contrast between the movement and jabbing of Ruiz, and the swarming come forward relentlessness of Holyfield. Many close and unclear rounds took place, which leads reasonable people to have drastically different scorecards. Ruiz would land a stiff jab and Holyfield would eat and walk through it at times Ruiz was able to tie him up on the inside other times Holyfield did successful work but each round pretty much looked the same and was extremely difficult to score. At the end of the night, the three judges all agreed that Holyfield had done enough and scored the fight for him by scores of 116-112 and 114-113 twice.

Though the title fight was competitive and entertaining in spots. It opened up more questions then it answered. While it was certainly reasonable to score that fight in Holyfield’s favor, most who were ringside and watching on Showtime agreed that Ruiz was the rightful winner. Showtime commentators described the decision as “absurd” and “ridiculous”. Which is probably absurd and ridiculous, 3DBoxing scored the fight 114-113 Holyfield giving most of the later rounds to Holyfield but we certainly understand that most of the later rounds were close and could have been scored the other way. Due to this controversial decision, an immediate rematch was ordered to take place in early 2001. A fight the Massachusettsan dominated and removed all doubt. Having split the first two outings a rubber match was the next logical step. The third fight ended in a controversial draw. Many thought Holyfield had done enough to take the decision and this time it was he who get robbed by the judges. Ruiz would go on to be in another historical bout losing to Roy Jones Jr making Roy the first middleweight to capture a heavyweight strap in well over a hundred years. Making Jones Jr the only middleweight in the “modern era” to accomplish the feat. Holyfield went on to fight entirely too long and doing some damage to his legacy, losing to the likes of Chris Byrd, James Toney, Larry Donald, Sultan Ibragimov and Nikolay Valuev. Not exactly a fitting legend for a legend of the ring.