The sweet science produced a busy week of superstar performances. Dmitry Bivol put on a near perfect performance and won over Max & Jim of the HBO cheerleading team. Andre Berto rallied back from losing the early rounds and being floored by Devon Alexander to eek out a career-saving SD victory. In Saturdays main event in Atlantic City Eleider Alvarez pulled a massive upset in crushing the Krusher Sergey Kovalev and captured the WBO light heavyweight strap. However, one performance stands above all others this week. It happened in the wee small hours of Friday morning, while must American were sleeping Tevin Farmer was hard at work out landing, out moving, out jabbing and outclassing former world champion Billy Dib on his way to finally capturing a world title.

Tevin Farmer who is now the 130-pound IBF champ has had an amazing ride that has finally accumulated with winning a world title on the opposite side of the earth. Farmer joins fellow Philadelphian Bernard Hopkins as not just a Philly world champ but as a Philly world champ who lost his pro debut. Losing his pro debut was far from Farmer’s only setback. He won just four of his first eight fights. Farmer then decided to rededicate himself and give boxing one last chance. He put together three consecutive highly impressive victories before running into undefeated Puerto Rican prospect Jose Pedraza. Pedraza a Puerto Rican star in the making and silver medalist was being primed for superstardom and a world title shot, he took a difficult eight-round decision over Farmer. It was perhaps this loss that changed Farmer’s career despite the loss he was able to show that he could hang in and give as good as he received against a world-class talent. From there on 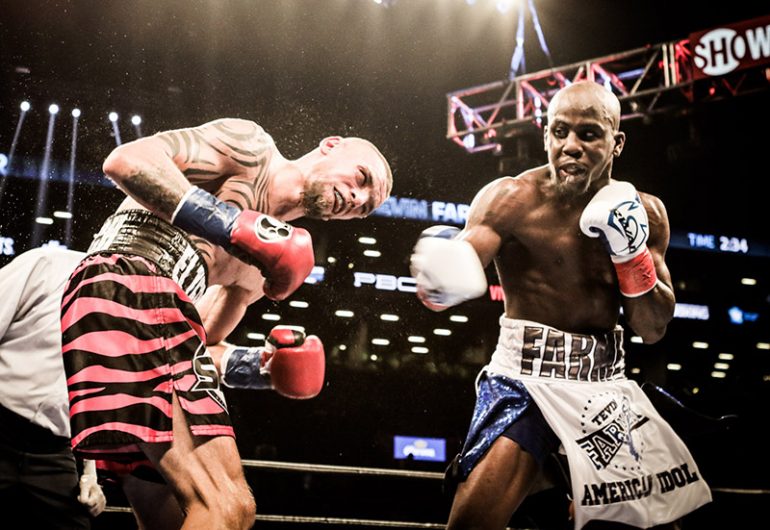 Farmer put together 18 straight victories over increasingly difficult competition which set him up for his opportunity for a world title. The vacant IBF 130-pound strap. The Philly fighter put on an amazing display of hand speed, defense, and footwork dominating the fight in the eyes of everyone, except for two of the judges who scored the fight against Farmer and in favor of Kenichi Ogawa. A decision so horrific it won out “Robbery Of The Year 2017” to make matters worse it wasn’t just the judges that cheated him out of a title, it was, Ogawa as well who tested positive for androstanediol (synthetic testosterone).

Farmer was given one last chance to fight for the world title and that was Friday, he had to fly to Australia and walk into enemy territory and fight a former champ. Philly fighters are known for their toughness and perseverance, Farmer is no exception. Putting on a star-making performance in the biggest fight of his life. This time Farmer removed any room for doubt out landing and outworking Dib badly. The quicker and younger Farmer used lateral movement and sharp counters to stop the attack of Dib. Out jabbing and outworking The Australian. Farmer threw a near shout out and has made the career comeback from journeymen club fighter to fringe contender to world champ in just a few short years. Finally, the little Philly engine that wouldn’t quit finally climbed the mountain. Tevin Farmer is now a world champ, congrats!!! We at 3DBoxing salute you!!!