It was a great night for the sweet science in the Big D Saturday night. The River Ranch at Texas Horse Park hosted an excellent night of fights. An outdoor horse park in the heat of a Texas summers night was the perfect backdrop for a night of fights in the Lone Star State. The card was brilliantly put together by Big Card promotions. As always, Texas was out to support Texas and both 140-pound champ Maurice “Mighty Mo” Hooker and 2017 The Ring Trainer of the year Derrick James, two Dallas natives, were in attendance.

The co-main event stole the show. A fight that pitted two unbeaten Super Flyweights who have been extensively covered by this website for the WBC USNBC Super Flyweight title. Unbeaten champ Ernesto Delgadillo was making the second defense of the belt he won against Bryan Aquino nine-months ago defending against Nate “The Great One” Green an unbeaten prospect that burst onto the scene last year when he traveled to Puerto Rico and pulled a shocking upset against a Puerto Rican prospect Emanuel Rivera on a Miguel Cotto Promotions card on ESPN. The action was competitive and back and forth throughout the 10 round affair. Delgadillo was the aggressor and was constantly on the attack stalking Green. Green, a slick southpaw was the far better athlete and worked well from range. Green landed the cleaner, flusher shots throughout he hurt Delgadillo in the first round and landed vicious body shots throughout the night. The champion took the body shots well and stayed on the attack out working the challenger. Outworking and outlanding Green on the exchanges on the inside. Green also suffered some bad luck as he was the victim of several hear butts, two of which opened up cuts, one of the cuts required about five stitches to close. Green also landed a flush left hand late in the fight that sent Delgadillo to the canvas, who on his way down grabbed Green and took Green down with him. What should have been ruled a knockdown was ruled a trip by referee Laurence Cole. Despite the bad luck, 3DBoxing Scored the fight for Nate Green 97-93. However, all three judges went the other way and scored it 97-93 for the Dallas native. Green who is a Connecticut native suffered the first loss of his career and it came in very controversial fashion.  His famed trained Luis Rosa said he “Wanted him [Nate Green] to do a little bit more every round, I thought we deserved at least a draw, but I knew it would be tough to get a decision here, I wanted Nate to do just a little bit more every round” Delgadillo who has a big following in Dallas was met with mostly cheers while the controversial decision was read, but there were certainly boos mixed in acknowledging perhaps the decision went the wrong way. Green’s manager Marilyn Rosa said they would “absolutely want a rematch” but expressed they may want to have it on neutral territory. 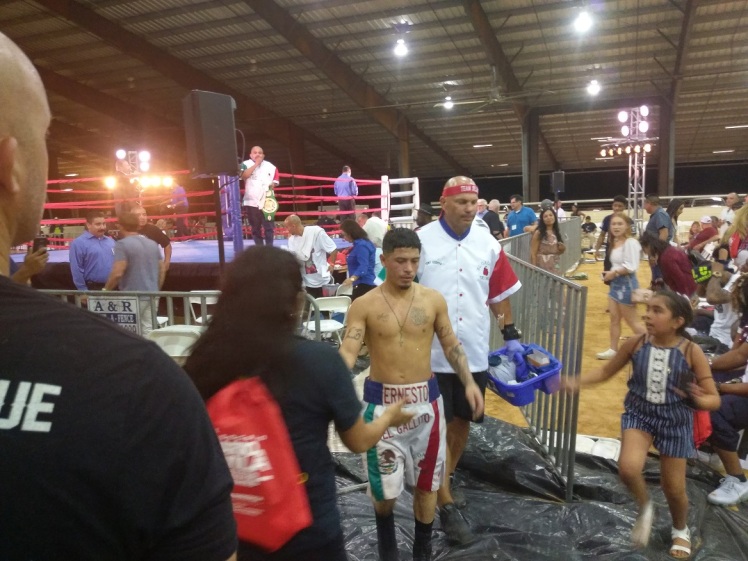 As the 115-pounders existed the ring following the co-main. The main event featured massive heavyweights, hometown favorite Greg Corin who weighed in at 274-pounds was outweighed by more than 20 pounds by the challenger for the IBF/USBA Gulf Coast Heavyweight strap, Homero “El Oso” Fonseca, a 6 foot tall 300-pounder. Despite his size, has pretty good movement and footwork. However, it was not enough as Corbin ran his record to 16-0 (10) via third-round stoppage. Corbin, who is now 37 will look for a world class opponent as he looks to progress his career to the next level. Fonseca fell to 14-9-3 and will fight again in December in his hometown of Corpus Christi. Fonseca despite a mediocre record is a highly skilled come forward fighter. He has been in the ring with the likes of Andy Ruiz Jr and Dominick Brazelle and has a draw with unbeaten prospect Justin Jones. Corbin was able to stop Fonseca something Andy Ruiz Jr, was not able to do. Ruiz is a highly regarded heavyweight who should have rightfully been heavyweight champ but had a decision stolen from him in his attempt to capture the heavyweight crown against Joseph Parker. That is the only loss of Ruiz’s career. Making Corbin’s win look even better in perspective.

The card Dubbed the Triple D Throwdown also featured some excellent up and coming local talent. Dallas’s favorite women fighter Shuretta Metcalf AKA Chicken AKA The Female Arturo Gatti ran her record to 4-31 in taking apart Mistery Neal. Jordan Jones ended a two-year layoff and ran his record to 2-0 with a dominating Shane Mosley-esque performance. Jones took a UD and displayed two-fisted power and a ferocious body attack combined with excellent hand speed. Jones is currently competing in the 140-pound division and according to his cut-man/mom Christine Lopez they are going to try to get him down to 135 over the next few fights. Welterweight Aman Rashidi, returned to the ring after nearly a 2-year layoff as well to deal with family health issues. Is trained by Derrick James and is out of DeSoto Texas just like welterweight world champ Errol Spence Jr. Rashidi put together a masterful performance and scored the knockout of the night, a crippling body shot that sent his opponent David Zapata to the canvas where he stayed for several minutes. Rashidi floored Zapata twice in the first and nearly sealed the deal in the opening stanza.