USA Boxing used to be the crown jewel of sport. Team USA  accumulated a total of 46 Olympic gold medals.  USA taking home the gold in the sweet science at the summer games was a foregone conclusion. In 1996 David Reid became the 45th American to capture gold. He did so in Atlanta in front of his American fanbase in Atlanta and became the first American to capture gold in the now-defunct weight division since Frank Tate did so in Los Angelas in 1984. It is also the same weight class where Roy Jones Jr was robbed blind in one of the biggest travesties in the history of our sport professional or amateur just 8 years earlier.

David Reid wasn’t considered one of the biggest stars on the ’96 team, a team that featured superstars like Floyd Mayweather, Fernando Vargas, and Antonio Tarver. While they all came up short one after another and for the first time in any Olympics that the USA competed in the prideful boxing nation was on the verge of being held without a single gold medal. Enter the “American Dream” David Reid. 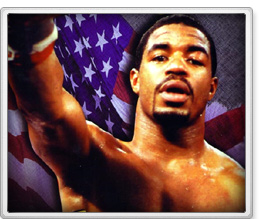 When David Reid walked into a boxing gym, not yet a teenager, his now legendary trained Al Mitchell told him he would be a 1996 Olympic Gold Medalist. Well, Reid got there, he made it to the Atlanta games after a spectacular amateur career. However, he was not considered one of the favorites in the light middleweight division to win gold. His journey for the Gold in Atlanta started with dominating victories in the first two rounds over Lee Wan-Kyun of South Korea (20–4) and in the second round defeating Pavel Polakovič of the Czech Republic (12–5). That set up a very difficult third round match-up with a relentless fighter from Tunisia named Mohamed Marmourt. Reid escaped the challenge with a narrow victory by the score of 13–8. That set up a semifinals matchup against Uzbek fighter named Karim Tulaganov. Reid won in dominating fashion 12–4 and advanced to the gold medal round to take on Cuban favorite Alfredo Duvergel.

On August 4th, 1996 David Reid, of Philadelphia walked into the ring with the highly favored Cuban star Alfredo Duvergel. A highly skilled, lightning-quick southpaw with a grade A Cuban pedigree. Duvergel was supposed to make easy work of the outmatched American. The first round proved to be a different story. Reid was able to hang in with the slick Cuban and was making it a fight, down just two points after the first round. Al Mitchell thought his man was in great shape and could make the necessary adjustments. That’s when things fell apart and the Cuban showed why he was the massive favorite and began taking the Philly fighter apart, outclassing him. Duvergel was able to land lead lefts avoid Reid’s return fire and catch him with more return lefts. Reid couldn’t fight the Cuban from the outside and was unable to get on the inside and was hit with everything and given a standing eight count. The whole world saw why Reid was expected to be food for the Cuban. Going back to the corner after an embarrassing second round, Reid slumped into the corner, when an assistant trainer told Reid “Fight’s not over” simple, almost academic instructions that pepped Reid up, Al Mitchell doubled down and said ” you can win this if you catch him with the right hand over his left.” Thats when the tough got going. Reid remotivated himself with the idea he had three more minutes to realize his dream. Reid said to himself if he misses with the left hand one more time. Just as he was told to look for, and just like he was hoping for and down by 10 points Reid saw the Cuban unload a lead left and he unloaded a massive right hand that landed flush on the Cubans jaw and dropped him for good. Just like that lightning struck and David Reid became the American Dream and fulfilled the prophecy that trainer Al Mitchell prophesied all those years ago. David Reid was the 1996 Olympic Gold Medalist.

Its been 22 years since the then 22-year-old Reid, won that miracle gold medal. Since then USA Boxing has fallen into a bit of disarray winning just one gold medal in the next 5 Olympic games combined. Andre Ward captured gold in 2004 in the light heavyweight division. That was the last time a Team USA Boxer got to the top of the amature boxing mountain. In 2012, the team didn’t capture a single medal. In 2016 they got back into the mix of things to a degree winning two medals. Nico Hernandez won a bronze in the light flyweight division and Shakur Stevenson got oh so close to ending the USA gold drought by taking home the silver in the bantamweight division. 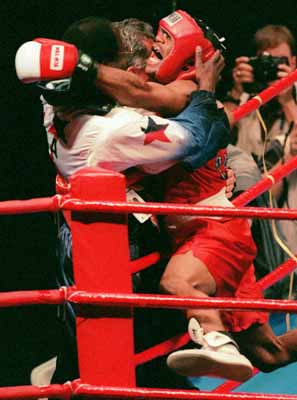 As far as David Reid he went on to capture a world title and establish a pretty respectable professional career. Finishing his career with a total record of 17-2 (7). A promising career that ended a bit prematurely due to his obvious eye injury. Reid captured the WBA 154 pound strap be defeating then-champ Laurent Boudouani of France by UD in the Convention Center in Atlantic City just an hour drive down the Atlantic City Expressway from Reid’s hometown of Philadelphia. He went on to defend the title twice against Kevin Kelly and Keith Mullings in a very entertaining fight before losing his strap to Puerto Rican legend Felix Trinidad in March of 2000. Reid went on to win three more times in 2000 & 2001 against low-level opposition before losing in a shocking upset of the year type loss to unknown Sam Hill. Hill who was coming off of a draw against a fighter with a record of 26-58-3, but was able to pull the massive upset of the American Dream. Reid hung ’em up and called it a career after the loss.