The welterweight division has long been one of boxing’s glamour divisions. A money-making division that featured superstars like Ray Leonard & Tommy Hearns, to Oscar De La Hoya and Miguel Cotto to Floyd Mayweather and Manny Pacquiao. It has been boxing’s money division, especially among American fight fans. Many if not most of the biggest fights over the last 30 years took place in or around the division. However, recently  147 has been on a brief hiatus, not due to a lack of talent but a lack of mega fights. That’s all set to change and primarily because Keith Thurman has stepped away and despite his unofficial comeback date of August 4th, which still has no opponent and we are reasonably skeptical of actually taking place, has become irrelevant.

Keith Thurman the current WBA champ and former WBC champ opted to vacate the green belt instead of ever defending it in the year and a half since winning it, and has delayed his comeback for going on eight months now. The delay and stall tactics have become comical. Last October he told the WBC he would be back in January, January became late February or early March, late Feb/March became, April 14th against Jesse Vargas at the Barclays and that became May 19th against an unnamed opponent, but certainly no one in the “top ten in the welterweight division” as Run Time put it. There was never an opponent named for his comeback, but it didn’t matter, Thurman got “injured” pulled out and vacated the title. Thurman said he was going to defend in January. That January date is now August and we still dont have an opponent. We have mapped out Keith Thurman’s Injury and how he had the surgery at HSS in New York City, which is regarded as the best orthopedic surgeons in the world.  So the facts are “One Time” had orthoscopic surgery at the finest orthopedic specialist in the world.  According to the American Academy of Orthopaedic Surgeons (AAOS), it’s “A common arthroscopic procedure, you may not need a splint and your range of motion and function may return after a short period of rehabilitation. You may be able to return to work or school within a few days of your procedure.” as far as complications “Most patients do not experience complications from elbow arthroscopy.” So, a standard surgery, performed by the worlds best surgeons that typically has a recovery time of a few weeks somehow left Thurman out of action for over a year. Thurman then suffered another “injury”, and we predicted all of this back in February. So the series of “hard luck injuries” we aren’t buying it for one second.

The welterweight division is beginning to heat up. All the top names are back in action. Errol Spence is getting his mandatory out of the way, Crawford will likely take the WBO strap off of Jeff Horn, former welterweight champs Danny Garcia and Shawn Porter are scheduled to square off for the now vacant WBC title. Along with cash cow and pay per view star, Manny Pacquiao returns to action against Lucas Matthysse setting up a big mega fight in the division and all of this is scheduled to take place this summer. If all works out, the winner of the vacant WBC strap and Errol Spence would unify. should Manny Pacquiao and Terence Crawford both win as expected they would be in line for a mega PPV showdown with each other.  Leaving two men standing entering 2019 (let’s say hypothetically ) that  Bud and The Truth are those two men standing. Considering Bud would have had to beat Horn and then Pac on PPV to get to this fight and Spence would have a huge win over either Garcia or Porter on his resume, a Bud/Spence unification fight would be a huge PPV event. Truth be told it would be the best fighter that can be made in the entire sport. On top of that, the winner, be it either Spence or Crawford would be a massive PPV star and the torch bearer as the next great cross-over superstar of the division.

The above scenario is completely possible and reasonable and it’s all in part, due to Keith Thurman leaving the sport indefinitely. Without Thurman hijacking the division these fights are now possible. The mere mention of the name Errol Spence made Keith Thurman run away from the sport and that’s the truth. With the undefeated and former unified champ not involved in the glamour division is actually turning out to be great for the sport. We are now going to get all these great fights which may not have come to fruition with Thurman holding the division hostage. 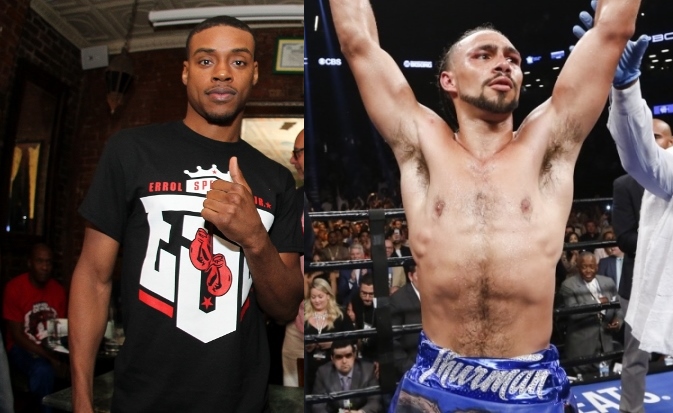 Keith Thurman came to national prominence, emerging as a star prospect in 2012. Accumulating dominate knockouts over quality opponents like Christopher Fernandez, Orlando Lora, and Carlos Quintana. Decent names to build a resume against. Thurman was building a resume at breakneck speeds. He was fighting often and knocking fighters out quickly. If 2012 was a great year for Thurman, 2013 was a life-changing one.  Winning a WBO title eliminator against Jan Zavek, then knocking out Diego Chavez to take the WBA interim belt. Then defended it against super tough Jesus Soto Karass. The interim tag was removed and Keith Thurman became the regular world champion and was off to the races. In less than two years Thurman went 7-0 (6) against a very high level of opposition, especially for such a young fighter. Over the next year and a half, Thurman made three more defenses against solid oppositions, Julio Diaz, Leonard Bundu and Robert Guerrero. These wins combined with the retirement of Mayweather elevated Thurman be considered by many as the best 147-pounder in the world. A sentiment that was confirmed when he ran off his next three victories. Picking up three wins over three world-class opponents Luis Colazzo, Shawn Porter and Danny Garcia. These three wins put Keith Thurman in the top five P4P in the eyes of many and certainly the best in the world at 147. The only issue with those three wins, which were all very impressive, they occurred over a span of 20 months. HIs activity hit the skids and he had come up with “injuries” to avoid or delay fights. Shawn Porter’s father Kenny Porter insists the car accident that delayed the Thurman/Porter fight was a hoax and never actually happened. A claim most thought was a joke and not serious, however recent events and the ridiculous stall tactics of Thurman have given a certain level of credence to those claims that where once chuckled at.

We at 3DBoxing have been criticized for being too tough on Keifey poo and removing him from our pound for pound list. It’s nothing personal and nothing against his skill set, which is very impressive by the way.  We have gone after Gary Russel Jr, Diego Magdaleno, Guillermo Rognodeaux and many others for chronic inactivity. We assembled an entire piece on a disorder we called Chronic Inactivity syndrome

None of the criticism Thurman received is due to his skills and ability in the ring, we took him off of out p4p list due to inactivity, we also took Canelo off the list for his out of ring issues. The reasons we criticize Thurman is his approach to a unification fight with Spence, which he said “Isn’t on the table” “Not going to happen” and “Not discussable”. Thurman recently got married, he has made a lot of money and has other life interests. If fighting is no longer something he wants then so be it! He has one life to live, vacate the WBA and walk away. Walk away as the former undefeated WBA/WBC Welterweight champ. Go ride off into the sunset with your new wife and start a family!  Good for you. The wins over Collazo, Porter, and Garcia can never be taken away from you. Just be honest with your intent, like we called, you had no intention of fighting in May, and we can’t be certain but this hand injury that set back your fight against an opponent that still hasn’t been named probably never happened. Just be honest with fight fans Mayweather walked away for almost two years in his absolute prime, but he said he was doing that. You have fought twice in about three years, this clearly is no longer where your heart is. The welterweight division is fine without you, it’s actually better off without you holding it up. iF its time to sign off and call it a career, God bless and best of luck to you. Just stop delaying and holding up the division. Tell the fans you’re done and your heart is no longer in  IT and maybe you will be back but for now, you no longer want this. The fight fans will respect that