This week in boxing history The Golden Boy strikes gold again. This time in the middleweight division an amazing sixth weight class. Once again Oscar proved his greatness and simultaneously proving he was no middleweight. Whatever you may think of the Golden Boy, whether you think he is underrated, overrated or rated just right, he ain’t afraid, the boy loved testing himself against the best, and BHOP was one of the great middleweight champions of all-time and all that separated The Golden Boy and The Executioner in a middleweight mega fight was little known WBO 160 pound king Felix Sturm. Oscar was coming off of a controversial UD loss to Sugar Shane Mosley in September 2003. After dropping the heated decision Oscar announced his attention to moving up to 160 and challenged the undefeated 160-pound champ and following that up with a unification bout with Hopkins.

Felix Strum won the WBO is unsensational fashion. Outpointing Hector Javier Velazco who was making his first title defense. Sturm, we learned took the fight on two days notice so an unspectacular performance is certainly acceptable. Sturm defended his title one time before the De La Hoya fights against Ruben Varon in Keil, Germany. Sturm took an uneventful UD throwing a shout out type performance. Capturing a middleweight crown and defending it, did little to bolster his image. Very few gave him a chance against De La Hoya on the June 6th fight in 2005.

As far as fight night, the PPV was dubbed “Collision Course” and featured Benard Hopkins making a defense against “Armed & Dangerous” Robert Allen for the third time. Hopkins disarmed Allen and took a wide and near shout out decision, doing his part in setting up the Oscar mega fight, to take place on Mexican Independence day 2005. As for the main event, well, that was a different story. It was going to be no easy night for Oscar. 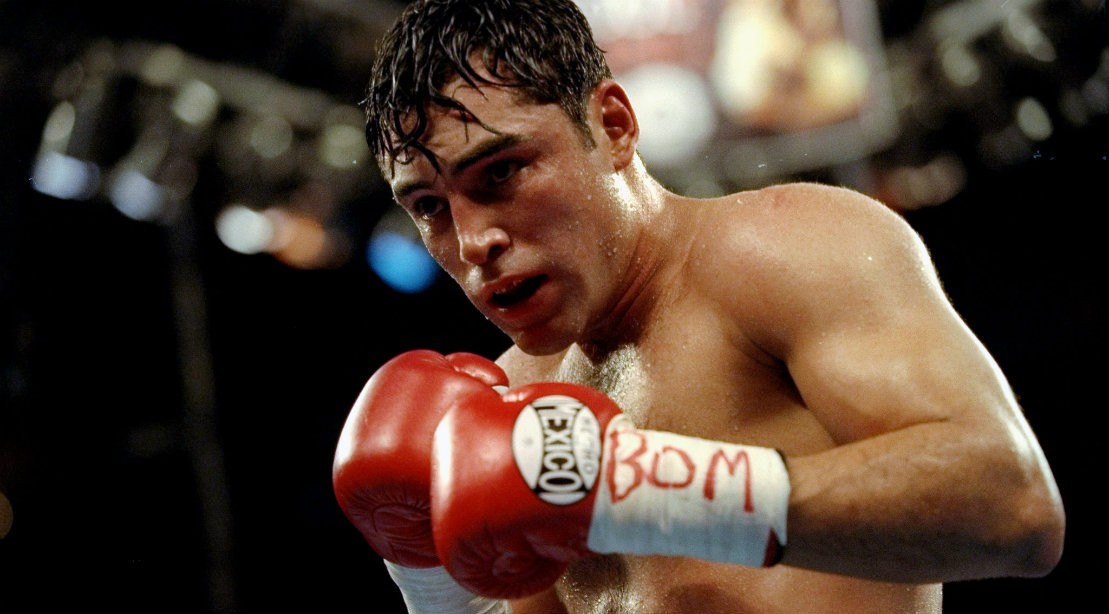 De La Hoya Came out strong attacking Sturm to the body. Throughout the first two rounds, Oscar’s the busier fighter, who despite eating a few clean hooks takes the first two rounds on his punch output and bodywork. Though Sturm didn’t land many clean shots a trend was starting to occur, Sturm was the much stronger fighter moving De La Hoya backward with every shot he lands. The size difference is noticeable and so is the difference in physical strength. A clear change begins to occur in round three and an uppercut and right-hand combination seemed to bother De La Hoy’s who face is beginning to turn red in round three and Sturm takes his first round on the cards. Starting in round number four the tempo of the fight changes as De La Hoya is no longer on the attack rather off the back foot and moving around the ring looking to avoid the bigger and stronger fighter. Oscar is still landing clean hooks that may be winning him some of these rounds in the first half of the fight but Sturm is cutting off the ring and cant miss with his jab.

By the second half of the fight Oscar just can not dent Sturm who keeps moving forward, he is walking through Oscar’s power shots and walking Oscar down. Landing not just with the pinpoint jab but also with power shots at the point. From the ninth round on every round plays out the same and its a fairly easy fight to score. The 9th-12th all played out the same Oscar comes out strong and flurries winning the first minute of the round and then begins to fatigue and fade. Sturm picks up the pace. Sturm out jabs Oscar and counters him beautifully with thudding left hands. Oscar tried to pick it up in the last round but Sturm clearly has more in the tank and lands the better more resounding power shots. Going to the cards it appears that Sturm pulled the upset winning each of the least four rounds giving him a 115-113 victory on our card on Lederman’s card and basically every card of every boxing pundit across the world. The cards came in unanimously:

All for Oscar De La Hoya?

The truth is the cards aren’t the worse thing we had ever seen and perhaps, even though we didn’t, many, many experts had Oscar beating Sugar Shane in the rematch and perhaps this was karma, but its hard to believe a fight that almost everyone saw for Sturm 115-113, not a single one of the three judges scored for Sturm, not a single one? Something seems fishy about that. There was an odd trend in close competitive  Oscar fights. Oscar got the decision over, Whitaker, Quartey and Sturm three fights he probably didn’t deserve but dropped two decisions to Trinidad, a travesty of a decision and to Mosley in the rematch that most thought he won. It seems that in every competitive De La Hoya fight the decision went the wrong way. This decision certainly played to that trend. 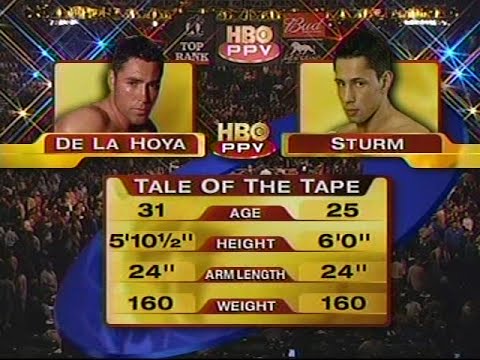 Sturm was supposed to have shown up at the MGM Grand to earn a payday, and get beaten down by the Golden Boy who was sending a statement to the world, the middleweight division and to future Hall of Famer Bernard Hopkins. Instead, a different message was delivered to the cerebral executioner, that Oscar was a painfully small middleweight and despite having his protector around his nipples he showed he couldn’t take it to the body. That was something that BHOP took advantage of in devastating fashion in their matchup just three months later dropping De La Hoya for the count with a vicious left hook to the body.

Oscar was successful in grabbing a middleweight strap but at the same time proved beyond the shadow of the doubt that despite being a first ballot hall of famer and an all-time great he was certainly no middleweight and probably should have stayed at 147 but certainly never above 154.