Very few fighters garner the love and respect of the entire fight community. It’s a rare fighter that 30 years or more after donning a pair of professional gloves does nearly the entire boxing community sit back and look at that fighter and say unanimously there was a warrior who fought the right way and did his job well. 64-Years ago God gave the boxing community a gift, He gave us one of those fighters, one of those unicorns that probably don’t exist anymore. On May 23rd, 1954 Marvelous Marvin Hagler was born in Newark, New Jersey. Spending his early years in the city’s Central Ward. Following the Newark Riots in July of 1967, in which 26 people were killed and property throughout the city was destroyed, including Hagler family’s tenement, Marvelous and his family moved from Jersey to Brockton, Massachusetts. It was in Brockton, the same Boston suburb that produced Rocky Marciano, that Hagler took up the sweet science and met Pat and Goody Petronelli, who became his trainers and managers. In 1973, Hagler won the National AAU 165-pound title after defeating Atlanta’s Terry Dobbs.

From 1973 to 1987 Hagler epitomized what a professional fighter is and what a professional fighter is supposed to be. A fearless come-forward puncher who ducked no one taking on all comers. Hagler literally built his career from the ground up. Making his career debut at the Brockton High school gymnasium in 1973 against Terry Ryan, who Hagler stopped in two rounds. It was the only professional fight of Ryan’s career, Hagler’s career went in a starkly different direction. However, that would take years to develop. It would take 14 fights against mostly unknowns over a tumultuous 15-month span to get Hagler any type of fight of note. A late summer card in Boston, where Hagler got the chance to be the opponent for gold medalist Sugar Ray Seales. Hagler was supposed to be easy work for the gold medalist, but in typical Hagler fashion, he refused to cooperate. After a competitive first round, Hagler landed a right-hook that shook Seales in the second. Hagler went on to dominate the rest of the fight and take a UD.

It was these type performances that lead Joe Frazier to tell Hagler, “You have three strikes against you, “You’re black, you’re a southpaw, and you’re good.” He often had to travel to his opponents’ hometowns to get fights. Three months after their first fight Hagler would secure a rematch with Seales and dominated him thoroughly but was robbed by the judges, which would become a reoccurring theme in Hagler’s career, in Seales’s hometown and was only given a draw. Hagler set the record straight in 1979 by destroying Seales in less than one-round.

Hagler would continue to grind away in the role of opponent scoring victories over Mike Colbert who had his jaw broken by Hagler. Kevin Finnegan was stopped in eight and required 40 stitches in his face.. Marvelous dropped controversial decisions to Bobby ‘Boogaloo’ Watts and Willie Monroe, two terrible decisions that Hagler would avenge by knocking both fighters out in rematches. All of this caught the attention of one Bob Arum who promptly signed Hagler and set him up with his first world title shot in 1979. In November, Hagler fought World Middleweight Champion Vito Antuofermo at Caesars Palace in Las Vegas, Nevada. At the conclusion of the 15-round affair Hagler clearly dominated the action, and according to folklore, even the ref announced Hagler as the winner and the belt was rightfully Hagler was stolen from him, as the fight was declared a draw and given back to Antuofermo.

The bogus decision was a speed bump but not a deterrent. Hagler would string together three W’s over a three-month span in early 1980 that would set up the biggest fight of his career. A fight with newly crowned WBC/WBA champ Alan Minter, in the champs backyard. The Wembley Arena in London. Hagler was not to be denied. In the first Hagler began to beat up Minter opening up cuts and gashes all over the Briton’s face. Including one gash above his eye that required 15 stitches to close. The cuts caused the fight to be stopped in the third round without a single complaint from the now former champ’s corner but to the dismay of the capacity crowd who took it upon themselves to literally riot.  Sports Illustrated reported: “Much of the ugliness at Wembley could be laid directly at the feet of Minter. In front of too many people with notebooks, the champion had announced in early September, “I am not letting any black man take the title from me.” Putting that to the side there was a new era in boxing, the Hagler era, an era that was going to stay for a while and 30-years later is still thought of as one of the most dominant eras in the modern history of the sport.

Hagler claimed he was not awarded a belt in London because of the riot. Upon his return to Brockton, he was presented with the key to the city, before a crowd of 10,000 at city hall. The Hagler reign started there and ran through most of the 1980’s before retiring in 1987. He put together victories over anyone and everyone in the middleweight division. Accumulating 12-consecutive successful total defenses winning 11 of them by knockout. Only the rugged and legendary Roberto Duran was able to withstand all 15 rounds with Hagler and dropped the decision in what is still remembered as one of the great middleweight fights. In addition, to outpointing Duran, Hagler stopped the likes of Fulgencio Obelmejias, Vito Antuofermo, Juan Domingo Roldan, John Mugabi and of course his win over Tommy Hearns which has been dubbed 9-minutes of hell that will never be forgotten by anyone who saw it. All of this setup his date with the comebacking legend Sugar Ray Leonard. A fight that we at 3DBoxing scored for Hagler and is hotly contested by fight fans decades later. While most feel Hagler eeked it out, it certainly wasn’t a robbery it was a nip and tuck fight that went one way instead of the other and featured one totally bogus scorecard. Hagler never entered the ring again, turning down massive paydays for a rematch with Leonard. Hagler walked away from the ring, in the same fashion he walked into and fought in it for nearly 15 years. On his terms! 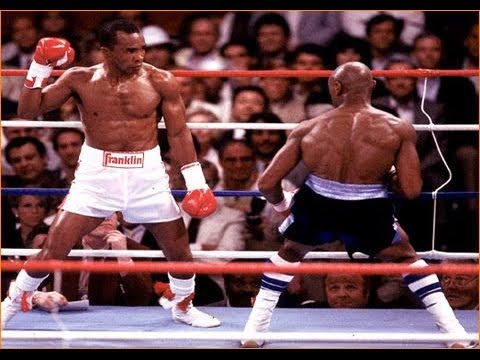 Hagler’s legacy is well established. He holds the second longest unified championship reign in boxing history at twelve consecutive defenses. At six years and seven months, his reign as undisputed middleweight champion is the second longest in modern history, behind only Tony Zale, who reigned during World War II. Marvelous Marvin was named Fighter of the Decade (1980’s) by Boxing Illustrated magazine and twice named Fighter of the Year by The Ring magazine and Boxing Writers Association of America. In 2001 and 2004, The Ring named him the fourth greatest middleweight of all time. In 2002 The Ring named Hagler the 17th greatest fighter of the past 80 years. BoxRec ranks him 25th on the list of greatest boxers ever, pound for pound; and the 6th best middleweight ever. Above all of those award fighters, trainers, pundits, and fans alike remember Hagler’s chin as one of the sturdiest ever, his punching power and relentless aggression are legendary in the minds of fight fans. There has not been another Marvin Hagler in the 30+ years since he retired, not even close.