Unbeaten Italian sensation Alessandro Riguccini is on the verge of a world title shot. It’s been a while since the great nation of Italy sported a world champion in the sweet science. Riguuccini has real power and a world-class skill set. The Italian poses all the abilities to make a run at anyone at the top of the wide-open 140-pound division. Its been a wild ride from Italian kickboxing champion to Cuban amateur boxing protege. But, now Riguccini is on the verge of adding world titleist to his fascinating resume. I was able to sit down with the undefeated Super Lightweight for a one on one interview.

3DBoxing GK- Tell us a little about your amateur career.

3DBoxing GK- you trained in Cuba with one of the great amateur boxers of all time, two times Olympic gold medalist Hector Vincent Charon. How do you meet up with him?

AR- I went to Cuba to learn how to box better. With kickboxing it’s 80% punching and 20% kicking. So I went to Cuba to improve my punching. When I got to Havana, I didn’t speak Spanish, but I speak Italian and the languages are close so I was able to get by with Italian, I asked for the best gym in Havana and I was sent to Hector’s gym and we started working. I lived in Cuba for 1-2 years bu tIn Cuba their visa’s only last two months so I could only stay for two months at a time. Then I would have to fly to either Mexico or back home to Italy. Hector was a great teacher, he beat fighters like Oscar De La Hoya, Felix Trinidad and Fernando Vargas in the amateurs. In Cuba, they fight every Saturday and Friday and sometimes maybe 2-3 that’s how an 18-year-old can have 2-300 amateur fights and Guillermo Rigondeaux can have like 500 fights. 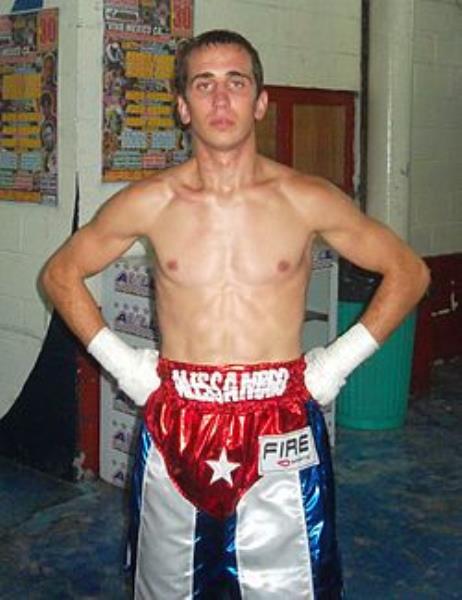 3DBoxing GK – You’ve shown excellent punching power, you have a Cuban pedigree. As you have stepped up your level of competition you’ve continued to knock out your opponents. You have also fought a lot in Mexico how would you describe your style in the ring?

AR- It’s more Mexican. In Cuba, there isn’t professional so its an amateur style, they train only for three rounds. The Cuban amateur style is great for technique and training. So I have both Mexican and Cuban style and for this reason, I am undefeated.

3DBoxing GK-You’ve shown excellent power in knocking out the better competition in the early rounds, where does that power come from.

AR- Guys like Crawford, Lomachenko, and Mikey Garcia have better technique, they have been doing this all their life I only started in 2007. So I have to get by with my power which comes from my legs. I started in kickboxing and built my legs up.

3DBoxing GK- Do you want to fight in the USA, you would have a natural fan base in New York with all of the Italians, you could sell a lot of tickets.

AR- My dream is to fight in Vegas or in New York, Brooklyn or even in Texas, There’s a lot of money there (laughs) in Mexico there is a lot of money but only if you reach the level of like Marco Antonio Barrera or Erik Morales otherwise there isn’t that much money there.

3DBoxing GK- Thank you for your time and sitting down and doing the interview. Please keep me up to date with when and where you are fighting next.

AR- Thank you I will.