Its that time a year again, Mr. Gary Russell Jr is scheduled to fight. He is coming off of a one-year layoff almost to the day. Which was on the heels of a 13-month layoff. Which is coming off another 13-month layoff. Russell the WBC 126-Pound champ is one of the most skilled fighters in the featherweight division or in any division. He is extremely elusive and hard to hit, has lightning quick excellent footwork and tremendous hand speed. He is a perfect technical fighter with above average snap on his punches. He can stop Jo Jo but Jo Jo almost certainly can’t stop him. Joseph “Jo Jo” Diaz Jr. has put together a perfect record of 26-0 with just 14 KOs. Diaz has won six times in the same span that Russell has won just once. So to say Diaz is more active is a serious understatement. Diaz is getting better in every performance it seems and at just 25, is coming off of the best outing of his career. A third-round destruction over Victor Terrazas, a tough, veteran Guadalajara native that has been in the ring with countless top-notch fighters and has wins over the likes of Fernando Montiel and Cristian Mijares. Diaz is a fundamentally sound boxer with an Olympic pedigree. He has the ability to sit back in the pocket and outbox almost anyone. He is a Mikey Garcia type fighter without the power. However, Gary Russell Jr. is a special different level of fighter who is still in his prime and is nothing like Diaz has seen yet.

Russell Jr is the more polished and accomplished fighter, but has been incredibly inactive and given away years of his prime by sitting on the sidelines. Early in the fight, Russell Jr will put rounds in the bank. Winning with the jab and landing combinations then getting out of the way. Piling up the points through the first four rounds dazzling with superior athleticism. As they enter the middle rounds Diaz is still working off his southpaw jab and Russell is beginning to slow down. Jo Jo begins to catch him with the jab-left hand combination. As the fight progress into the later rounds, Diaz is getting closer on the scorecards and simply outworking and slightly out landing Russell. Diaz is busier but Russell is more accurate, lots of toss-up rounds. Diaz seems to take the last three rounds on the cards but its pretty close and he isn’t landing tons but he’s landing just a bit more than Russell who seemed to be negatively affected by the lay-offs. Going to the cards Russell seems to be ahead on the cards. But, the decision goes split the other way with scores of 116-112 For Russell and 115-113 twice for Diaz Jr. Who takes a very controversial split decision. 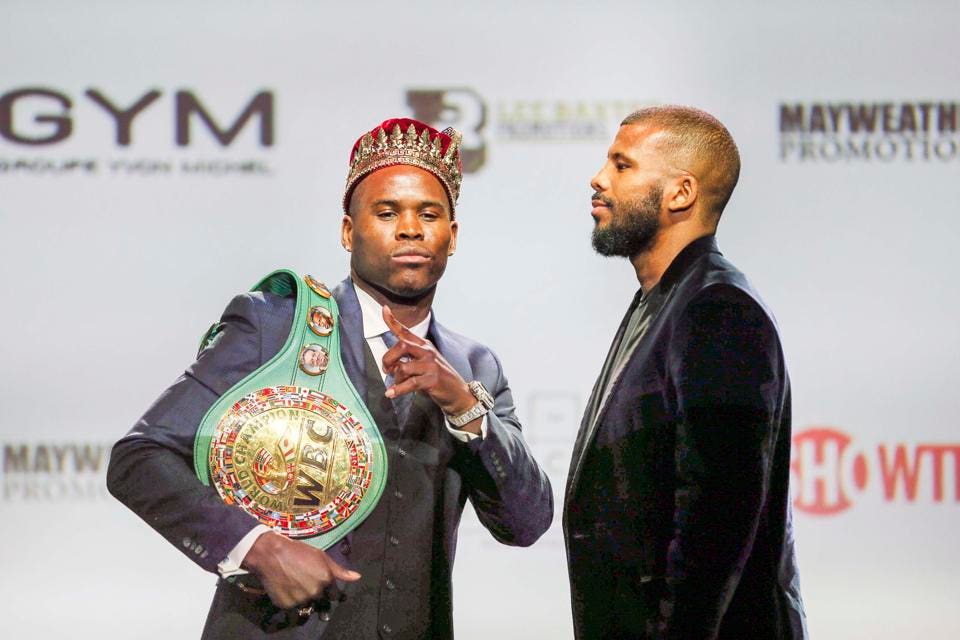 Adonis Stevenson much like Gary Russell Jr has suffered from chronic inactivity syndrome. having fought just three times and a total of nine rounds in the three-plus years since he took a hard fought and hard earned decision over Sakio Bika. In addition to the gross inactivity, Stevenson turned 40. He still, however, posses what is perhaps the most feared and dangerous weapon in the sport today, his left hand, which can strike and end a fight at any point. Power is the last thing that goes, and the 40-year old Stevenson has that in spades and a fight is never out of reach. Badou Jack is a better technical boxer, he is a combination of pressure fighter and boxer/puncher also a tremendous body puncher. He proved to be a legit 175-pounder in his last outing, absolutely manhandling and stopping Nathan Cleverly in five rounds. Cleverly who has previously fought at cruiserweight.  In addition to Cleverly, Jack has fought everyone at 168, one of the deepest resumes in the sport today, he has been in the ring with James Degalse, Anthony Dirrell, Lucian Bute and George Groves. In order to beat Stevenson you have to be able to outbox him for 12-rounds, but can a pressure fighter like Jack avoid Stevenson’s left hand for those 12-rounds?

Jack is the better and younger boxer and he will put that to use early in the fight and expose Stevenson’s ring rust. Punishing the champ to the body taking the early rounds on that bodywork and firing a lot more shots. Really, outlanding and outworking Stevenson on the inside. Throughout the first half of the fight Jack is piling up the points but Stevenson has a few moments with the straight left that catches Jack’s attention every time it lands. It lands cleanly in the 6th and drops the challenger who is able to get to his feet but wants no part of Stevenson and runs out the round by tying up and trying to get his legs behind him. Jack is much more careful and cautious from that point on, tying up a lot more on the inside and much more aware and cautious of the left. By the 10th Jack is still slightly ahead on the cards but sees his opportunity slipping away and again picks up the pace increasing his work rate. The 40-year old champ is slowing down and Jack is getting his second wind dominating the last few frames with his aggression. Going to the scorecards Jack steals the crown by hard-earned UD 116-111 twice and 115-112.