Errol Spence Jr has always been known for his quiet and reserved manner. 3DBoxing is a Dallas area based publication and having covered and followed Errol Spence for years we can confirm there isn’t a nicer more polite kid than Spence Jr. “EJ” has always done his talking in the ring and has been nothing short of a mild-mannered gentleman outside of it. Somewhat of a Jekyll and Hyde with what you see in and outside of the ring with the IBF 147 pound champ.

Something seemed to have changed and is irritating  “The Truth” who is scheduled to make a homecoming defense against  Carlos Ocampo on June 16th. Ocampo who is unbeaten and the mandatory challenger is mostly unknown outside of hardcore circles is lightly regarded and will do nothing for Spence’s legacy or pound for pound status. Spence is dedicated to staying busy and defending his strap and has a goal to unify the division, but seemingly no one wants to mix it up with the tough Texan. This is causing Spence to step out of his reserved nature and talk a little more freely. Spence has called out and is now mocking WBA/WBC welterweight champ, Keith Thurman. Spence has called him “Sometime’s Thurman” and now responded to a meme that shows Keith Thurman running from Spence like Forrest Gump claiming he is injured.
Keith Thurman who had standard elbow surgery which according to the American Academy of Orthopedic surgeons only takes a few weeks to heal has had his entire career upended by this injury and has been out of the ring for 14 months due to an injury that heels in 2-4 weeks. He has delayed his comeback from the minor surgery for months and is now claiming a hand injury and has no fight on the docket at all. At no time in our history of watching and covering boxing have we seen a world-class P4P unified champ at the level of Thurman openly duck someone to this degree. Keifey poo has upended his entire career and may not fight again because of how much Spence terrorizes him.  After the Broner/Vargas fight, Spence stated that in reference to the meme where he is chasing down Thurman in his Car, that he was driving  80 mph and still can’t catch him “…He is running fast” Spence joked. Spence’s clubber lang tactics to try and get Thurman in a unification bout is probably not going to work anytime soon, and with Bud scheduled to fight Horn and Danny Garica and Showtime Porter look like they are destined to fight each other. Where is Spence getting his mega fight?
Amir Khan has called out Spence and said he is 100% against southpaws. That is certainly a fact, what also is a fact is that Errol Spence is 100% against everyone. Ok, great let’s see it. Amir “King” Khan always has a fan base. He has a massive following on both sides of the pond and with the hand speed, he is always a threat. The fact is Khan is certainly chinny, but has never been outboxed by anyone and he has fought everyone adds intrigue.  If Khan can stay on his feet he can win. Khan outboxed big punchers like Marcos Maidana, he was also out boxing Canelo round after round until Canelo, the PED infested middleweight, finally caught him on the paper mache chin. Errol Spence Jr is a throwback who is willing to fight anyone at the division and would probably be willing to fight anyone at 154  with a belt. Spence wants to stay active and deserves a mega fight. A Khan fight would be the biggest and most watched fight of his career and of course his biggest payday. The fight could be held in Vegas or in the UK where Spence already stopped Brook and is well respected. Coming off the 40-second Lo Greco annihilation, Khan’s intrigue is back and he would be given a real chance against anyone at 147 with that speed. His lightning quick hands and beautiful fundamentally sound skill set against Spence’s come forward nature combined with his power and ability to beat the snot out of people makes this an all-action fight with a contrast in styles. 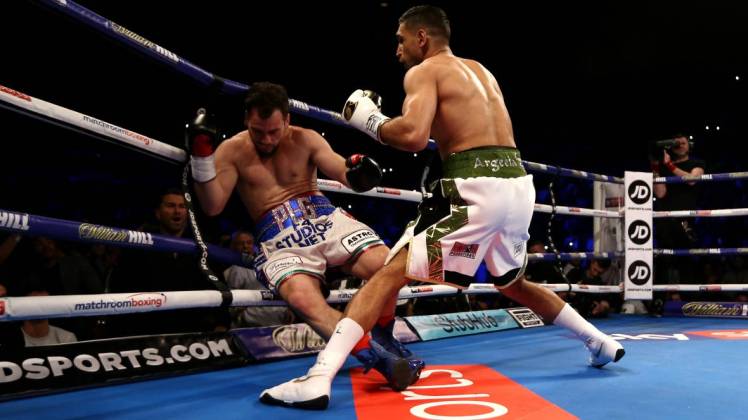 Of fighting the avoided IBF welterweight champ Khan said “Errol Spence is a very good fight for me. Stylistically, I’ve got a 100 percent record against southpaws,” said Khan to skysports.com. “If I’m at the best of my condition, I honestly think I can [defeat Spence Jr], with the speed and movement and it being at 147lb where I feel comfortable at. I think that’s a good fight for me at that weight.” to which “The Truth responded by saying ”I know he called me out. That’s crazy man,” 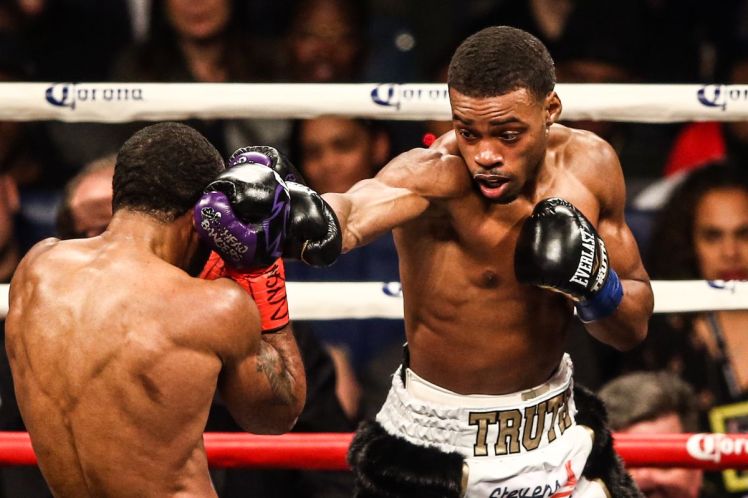 With Terence Crawford tied up with Jeff Horn in Australia, and Keith Thurman officially in hiding, this is the biggest fight that can be realistically made in the welterweight division at the present time and it can be held on either side of the pond. The good news is it also may be the best fight that can be made in the division.  Spence who is committed to staying active and fighting three times in 2018 and assuming that Spence gets past his mandatory Carlos Ocampo in June in Dallas, who he should easily take care of.  The timing would line up perfectly for a Spence/Khan IBF world title fight in Q4.