I can’t decide whats more annoying everytime someone talks about the recent success of Vasyl Lomachenko and some hater shouts out “but Orlando Solio” or whenever someone brings up Mayweather’s legacy and some hater shouts out “but Jose Luis Castillo, Mayweather got beat up by Castillo”…Nah, I figured is out the Mayweather haters are more annoying. They have been carrying on with this for 16 years. This week in boxing 16 years ago Floyd Mayweather extended his unbeaten streak to 28 by taking a very controversial decision over Jose Luis Castillo at the MGM Grand in Las Vegas.

To set the record straight this was a very close and competitive fight that could have been scored for either fighter. 3DBoxing scored the fight for Jose Luis Castillo 114-112. It ranked #20 on our list of 20 worst decisions of the last 20 years (1997-2017). Not because Floyd getting the decision in such a close and competitive and yes boring fight was such a robbery but because of a disturbing trend. In a fight almost no one scored for Mayweather all three judges scored it for Mayweather and not even competitively. That’s hard to comprehend. Could you make arguments that perhaps Mayweather won those rounds? Absolutely! But for every judge to give every close round to Mayweather and none of the judges gave any of those toss-up or drawish type rounds, not a single one to the defending Champ, is almost incomprehensible and suggests that the judges were looking for a reason to give the young Mayweather rounds. You shouldn’t have to look for reasons to give anyone rounds. Just score the rounds and 50/50 rounds should kinda go 50/50 to each fighter organically. Again we aren’t outraged or shocked that the very close fight went to Mayweather, we are ok with that. The fact that none of the three judges scored the fight for Castillo, that none of the judges thought Castillo won that fight or even won any of the very competitive rounds is eye-opening, to say the least.

For the Champion Jose Luis Castillo, he was beginning to open serious eyes. He was making his fourth defense of his WBC strap that he won in a massive upset over Stevie Johnston. The fight was declared upset of the year by The Ring. He went on to defend it a few more times including in destroying former champ Caesar Bazan. Castillo was on the verge of entering the conversation of great Mexican champions.

Mayweather came out strong landing a perfect lead left hook in the first minute of the round. He moved beautifully and although his jab may not have scored regularly it was stiff and snappy enough to keep the iron-jawed Castillo at bay and prevented him from walking in the front door. Mayweather landed another beautiful left hook and a perfect lead right towards the end of the second round, combined with his movement and jab that nullified any of Castillo’s aggression Pretty Boy jumped out to a 2-0 lead. 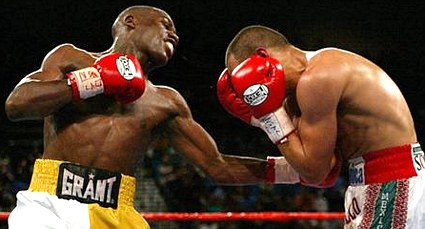 In rounds, three and four Castillo began to pick up the aggression and started landing some power shots on the inside. Mayweather continued on his back foot landing here and there while Castillo picked up the rate and effectiveness making rounds and 3-4 very difficult to score. By the fifth round, Castillo began to figure things out and landing solid body shots carrying rounds 5 and 6 based on the body shots and ability to cut the ring off on the fleet-footed Mayweather. Mayweather’s lightning quick reflexes made Castillo miss with a lot of his work but he was certainly landing more shots and doing cleaner work. We have what appears to be an even fight halfway through the fight

Moving into the second half of the fight we have a quintessential bull chasing the matador scenario. With Floyd having success in the seventh, keeping Castillo guessing and missing while landing an occasional jab or right hand. Castillo is trying to turn it into a scrap but didn’t have much success in the seventh. Has Floyd adjusted and figured out Castillo code? The fight is really turning into a contrast of styles and the champ is deducted a point in round 8. By the ninth Castillo is starting to impose his will and is beginning to score to the body and more effectively and in the 10th round a very competitive round, Floyd is deducting a point for pushing off with his forearm and Castillo scored with a very nice combination which likely steels him the round and makes a very competitive round a 2-point round in his favor.

Floyd perhaps thinking the fight is up for grabs in the last two rounds picks up the aggression in the 11th, jumps on Castillo and lands a clean right to start the round, and it’s Castillo tying up Floyd. There is a lot more toe to toe action in the final six minutes. Castillo is probably getting the better of it landing some clean body shots. In the final round, Mayweather is back to moving and Castillo rips a few perfect body shots, borderline shots at best. Castillo knowing he is on the verge of a massive upset is fighting with a renewed passion and hunger, tearing at Mayweather, desperately trying to get to him and seal the deal. the champ put in some vicious bodywork, mixing in some good work to the upstairs as well. Castillo CLEARLY wins the last round.

Jim Lampley reflexively responds with “Not the fight we were watching, not the fight we were watching” In the wrap-up, Floyd’s biggest fan, Larry Merchant, said to Lampley that it wasn’t controversial at all we all know who won the fight, obviously meaning Castillo. While that is certainly hyperbole the fight is hotly debated more than a decade and a half later. We scored it for Castillo by a very narrow margin and reasonable minds can certainly disagree but two things certainly are agreed on, the fight was much closer than the cards indicated and Mayweather removed all doubt in the rematch. 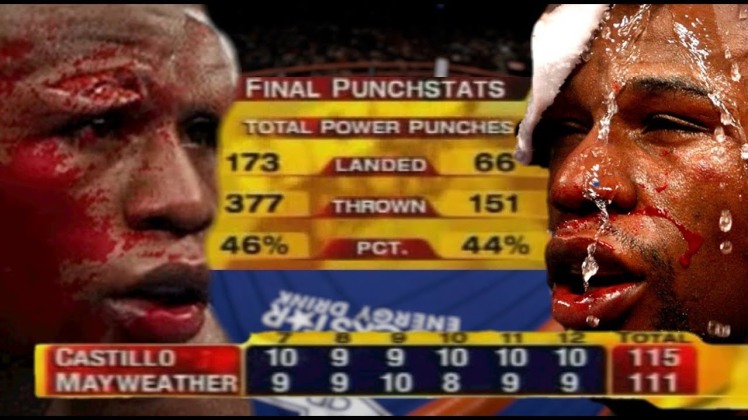 Mayweather was moving up from the 130-pound division, where he held the WBC title.
Mayweather was a 4-1 favorite.
Mayweather made $2.2 million, and Castillo got $1.1 million.
There was a crowd of 6,920 at the MGM Grand.
Mayweather was able to keep the fight on the outside and outbox Castillo in the early rounds. All three judges gave Mayweather the first four rounds. Mayweather complained about his left shoulder to his corner between rounds. He later said he injured it in his last day of training. Castillo finally caught up to Mayweather in the sixth and seventh rounds, winning both rounds on all three scorecards. Castillo was able to get closer and land shots to the body and head.
Referee Vic Drakulich took a point away from Castillo for hitting on the break in the eighth round. In the tenth round, Drakulich deducted a point from Mayweather for using his elbows.
The crowd booed the decision.
HBO’s unofficial scorer Harold Lederman had Castillo winning 115-111, the Associated Press had Mayweather winning 115-111 and Dan Rafael of USA Today had the fight 114-114..- Courtesy of BOXREC.com