The heavyweight fight for undisputed supremacy is going through heavy negotiations and not every deal is a good deal. Deontay Wilder has been screaming for the fight for over a year now and Eddie Hearn has made an offer to Wilder’s team of $12.5 million. The offer has been much discussed and criticized by boxing media and fans. 3DBoxing has concluded one thing for sure and that is, Wilder should take the $12.5 million. For Wilders last three fights he is averaging about $1.5 million per fight:

Career high $2.1 million vs Ortiz
$1.4 million for the rematch against Stiverne
and 900k for his fight against Gerald Washington

That’s about $1.5 million per fight. He is being offered eight times that to fight for the undisputed heavyweight crown. If a fight cant be made with AJ, the next likely opponent for Wilder would be Dominic Breazeale. It’s hard to imagine Wilder getting paid much more than that three-fight average of $1.5 mill to take on Breazeale a fight that no one is intrigued by. Without Joshua, if Wilder fights again in 2018 and then fights twice a year for the next 4 years that’s 9 more fights and then retires. If he makes the same $1.5 million dollar average that he has made over his last three fights. That is only $13.5 million dollars, that’s only one million less than he would get for one fight with Joshua. Take the fight with Joshua. There is a major misconception that this is a $100 million dollar fight. This is not anywhere near a 100 million dollar fight. AJ responded to those claims by saying if its $100 million fight he will take $50million up front and make the fight immediately that he wouldn’t need a 60/40 split in his favor he’d do it for half. He knows and Eddie Hearn knows this isn’t anywhere near a $100 million dollar fight. 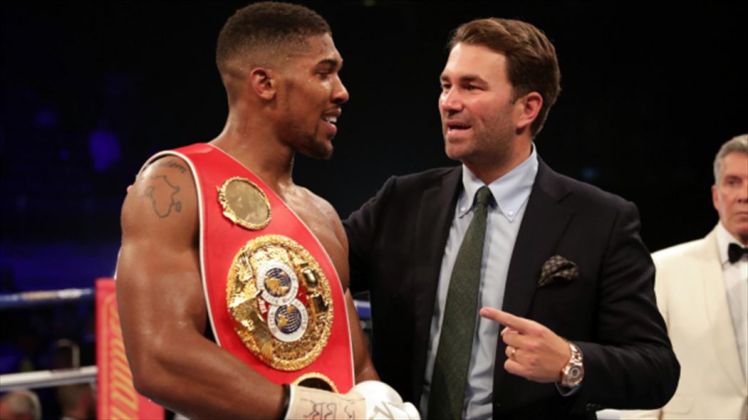 There have been exactly two heavyweight fights in the history of the sport that did $100 million in revenue. That’s Tyson Vs Holyfield II and Tyson Vs Lewis. Neither Wilder nor Joshua are as big as names as Tyson, Holyfield or Lewis… Want to test this out? Call up your local sports talk radio show and ask them who Tyson, Holyfield, and Lewis are and then ask them who Wilder and Joshua are and then get back to me which fighters the hosts are aware of. Want to test it out call up radio legend Chris Mad Dog Russo, of Mad Dog Radio on SiriusXM, a nationally syndicated sports talk show. Ask him who Deontay Wilder is and see if the legendary sports talker has any clue who that is.

This isn’t even a Pay Per View fight in the US. Wilder has never done a PPV. Joshua did 350k live views for his last fight on Showtime a unification bout with Joseph Parker. 350,000 live views don’t even come close to equating to a PPV event. To put that in perspective Terence Crawford typically does over 900k live views for his fights. What did his PPV showdown against Viktor Postol do? A unification fight, about 50,000 PPV sales. It was one of the biggest failures in the sport. The fight is a punchline, its the butt of jokes. Wilder or Joshua aren’t names that equate to PPV  in the US at least. Joshua did 350,000 live views in a very boring fight that doesn’t make you a PPV star for your next time out. What 350,000 Views from AJ does mean is that he isn’t well known or a draw in the US. Truth be told neither is Wilder. Don’t believe me? Test it out call up your local sports talk radio show, or call up Mad Dog Radio and ask them who Deontay Wilder is, and they will ask you what team he plays for… He isn’t a name, he isn’t a crossover star. The breakfast club interview with Wilder, where he said he “wants a body on his resume” helped him out. All press is good press and that clip certainly made the rounds, but he isn’t a commodity among American sports fans. To say that this fight is going to do similar numbers to What a Tyson/Holyfield rematch did, a rematch of one of the great upsets in American sports history between to legendary icons is absolutely absurd and downright silly.

Yes, Wilder and AJ have all the makings of a great fight. Its a memorable a jaw-dropping KO waiting to happen. Add to that the crowing of a new undisputed heavyweight champion of the world and you have a fight fans dream. That being said as fight fans we live in a bubble. A bubble where everyone in the bubble knows who Andre Dirrell and Jesus Cuellar are. Yes, we know those names like the back of our hand but ask the average sports fan ask the average local sports talk radio host who that is, they won’t have any idea what you are talking about.

This isn’t a hundred million dollars fight. its maybe a $50 million dollar fight and Wilder who has never made more than $2.1 is getting a chance to make $12.5. He should jump at the offer. If he wins then he should stipulate that he wants a 60/40 split in his favor in a rematch. If it is a $50 million dollar fight which seems reasonable Joshua would get $37.5 million and Wilder $12.5. Joshua does $20 million dollar purses and draws 70k live fans. He along with Canelo are the biggest stars in the sport. Wilder can get there if he beats AJ. The only way he can beat AJ is to fight AJ. He is getting offered the biggest payday of his career to fight him. Matter of fact he is getting about 600% more than the biggest payday of his career to fight him. When Holyfield wanted Tyson he surrendered to his every demand and took $5 million to Tyson’s $30+ million. When Floyd wanted to be the face of the sport and take the PPV king and the face of the sports moniker from Oscar he literally gave into every single demand that Oscar made. Why did they do this? The hedged a bet on themselves, if they win this fight they can write their own ticket moving forward. Holyfield got $35 million for the rematch. Floyd went on to make incomprehensible sums of money. But, Holyfield needed that win over Tyson and Floyd needed that win over Oscar and they were willing to take the short end for long-term gain. Shelly Finkel and Lou Dibella need to get in their man’s ear and explain to him that you need to take this fight and when you win you can write your own ticket.

Should Deontay Wilder continue to negotiate? Yes. Everyone wants to make every less penny they can. No one wants to leave any money on the table. Wilder knows he has $12.5 mill waiting for him. He should come back to Eddie Hearn and ask for $20 million and try to negotiate it to $15, but if he cant get that $12.5 is more than fair. If anyone with any business savvy had two employees, one who generates $20 million dollars and the other generates $2 million and the $2million dollar producer asked for 40% of the revenue you would laugh at him, and that’s what Hearn is doing to Wilder.