Pernell Whitaker vs. Oscar De La Hoya billed as “Pound for Pound”, was contested on April 12, 1997, for the WBC and lineal welterweight championships. 21 Years ago this week.

This was a legacy-making fight between two gold medalists who went on to capture world titles in multiple weight classes. For the veteran and defending WBC champ, Pernell Whitaker, it was a fight to cement his legacy as one of the best fighters of this or any era. Perhaps the best defensive fighter to ever lace them up. Pea had been the WBC welterweight champ for four years, prior to that he captured world titles in three other weight classes and had been considered a pound-for-pound elite since 1989. The Ring magazine listing him number one in their annual pound-for-pound rankings for three consecutive years from 1993 to 1995. For the 24-year-old Oscar, it was a chance to create his own legacy and cement himself as the best current fighter in the world and to take the crown from the pound for pound king.

The mega-fight had been in heated negotiations since De La Hoya’destroyed legendary Julio Caesar Chavez 10 months prior. The bout was all but official for early 1997, though both De La Hoya and Whitaker would first have to get past their mandatory challengers. De La Hoya would make his first, and only, defense of his 140-pound strap against Miguel Ángel González. De La Hoya made easy work of the undefeated Mexican. Whitaker, on the other hand, looked sloppy and disinterested in his fight with Diosbelys Hurtado. Hurtado scored two knockdowns of the WBC champ and was ahead on all three scorecards when Whitaker rallied in the 11th round, and scored a terrifying knockout over Hurtado that went on far too long . Arthur Merante Jr seemed to be a spectator taking in the beat down watching Whitaker score 10 unanswered left hooks to Hurtado’s head before finally stepping in and doing his duty. In doing so Whitaker–De La Hoya was no longer a dream bout but a reality. 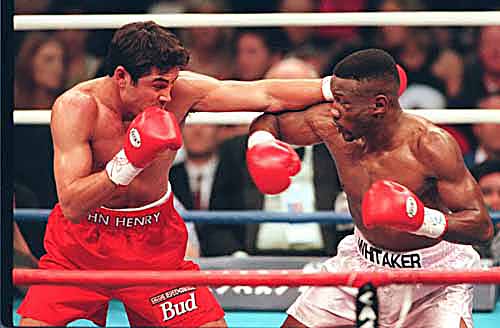 Whitaker was thought to be the smarter, slicker veteran who would have to avoid the bigger, younger and stronger De La Hoya. Whitaker would have to muster up every ounce of slickness and intelligence to get past the young hungry lion that was Oscar. Both fighters have been a part of many very controversial decisions and this fight would be as controversial as any. It ranks #4 on out 20 worst decisions of the last 20 years (1997-2017) that we compiled last year

Pea, started the fight moving around and firing his jab keeping Oscar chasing him around making him miss. The veteran champion dominated the first round with excellent movement and out jabbing Oscar. The challenger had perhaps his best round of the fight in the second having success switching back and forth between the orthodox and southpaw stance. Despite still not looking comfortable in there and missing a lot Oscar did land some clean left hands and carried the round. The third round was mostly uneventful and perhaps a swing round. Not much happened and it was a pretty even round. However, it was crucial in the fact that The Golden Boy was a victim of a slight head but, ruled accidental and at that time the WBC had a rule that the other fighter would receive a one-point deduction. So making a swing round either 9-9 or a two-point round for the challenger depending on how you scored it. 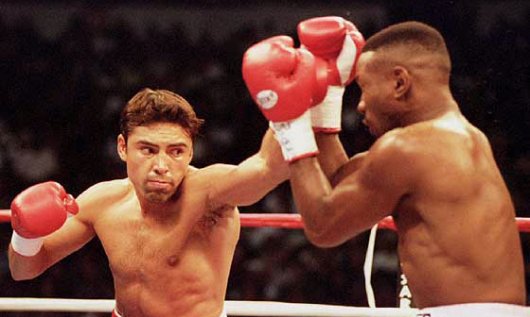 By the fourth, Whitaker settled in and saw the task at hand and took control of the fight with superior movement and boxing skill. It has been said that Oscar fought everyone from lightweight to middleweight and never got outboxed, well in this fight against legendary Pernell Whitaker starting especially in round four Oscar got outboxed. Oscar switched back and forth between a left and right-handed stance. Pea was the puppet master pulling Oscars strings making him do everything he wants. Flurrying and making Oscar miss. Whitaker begins celebrating and taunting his younger foe, dropping his hands and turning his back on him. Offensively Pea was scoring with a jab and getting out of Dodge. He has seized control of the fight on the cards by the end of the seventh (or one would think). The eight saw a short-lived comeback from Oscar who was able to land a few of his cleanest left hooks of the night catching the attention of Sweet Pea for the first time since round 2 and Oscar clearly taking that frame.

That was short lived and Whitaker took back control of the fight in the ninth, much to the dismay of Jim Lampley. HBO’s lead cheerleader raised his cheerleading game to the next level. Snapping at Roy Jones Jr and Larry Merchant that Oscar was winning the fight who was suggesting Pernell was landing more shots and the cleaner more effective shots. Moments later Whitaker caught Oscar with a balance shot sending him to the canvas, and Mills Lane picked up the count. The champ ended the round beautifully landing perfect body shots. The last three rounds were pretty close with Oscar doing enough to certainly take the 12th and a flurry that all missed and was countered with a perfectly placed Whitaker right-hand to the body looked better than it was but perhaps caught the attention of the judges.

Roy Jones Jr mentioned starting the 12th that Whitaker had the fight under control and just needed to make sure he didn’t get knocked out. Whitaker seemingly listened and stayed away and survived. As the final gavel sounded, it looked like Whitaker had done it. He had tamed the young lion and schooled him. Oscar kept busy to a degree but was out thrown, out landed and was largely ineffective. Whitaker even appeared to as Roy and Larry pointed at land the cleaner shots and even dropped the challenger. It looked like Sweet Pea had cemented his legacy and confirmed that he was still the pound for pound king of the ring and when the scorecards were read off:
Chuck Giampa: 115-111
Dalby Shirley: 116-110
Jerry Roth: 116-110

All seemed right 3DBoxing had it 116-110 for Whitaker. Then the unthinkable happened all three judges gave it to the challenger. None of the three judges scored a fight virtually everyone besides Jim Lampley thought Pea won, scored it for Pea. Shockingly none of the judges even had him relatively close in the fight. What does a robbery look like? What does corruption look like? It looks like an aging champion dominating a young earner, the future face of the sport and all three judges ignore that and giving the young challenger a totally bogus gift decision. The idea that three judges could watch this fight and only score three or four rounds for Whitaker isn’t incompetent its criminal. It wasn’t that the judges scored it for the de la Hoya it’s how they did it. The judge’s cards clearly showed the legendary Whitaker never had a shot. As Teddy Atlas would say the commision needs to call these judges in and suspend them and make them explain their score cards and they need to keep them suspended until they are able to explain those cards.