Erislandy Lara and Jarrett Hurd are set to unify their WBA & IBF 154 pound straps this weekend in the Barclays Center this weekend. A fight that matches finesse and the picture-perfect Cuban style against perhaps the biggest (literally) and strongest Jr. Middleweight champion we have ever seen. Hurd is a massive 154-pounder, who can wear you down with his size and strength or take your out with one punch. Hurd has a perfect record of 21-0 and has a current streak of seven consecutive knockouts. Whats most impressive about that KO streak is that as his competition has gotten stiffer Hurd has risen to the occasions and gotten the stoppages. Never, has Hurd ever faced this tough of an opponent. Erislandy Lara Captured his WBA 154 pound strap back in 2014 in San Antonio Texas in taking a one-sided decision over Ishe Smith. Lara has made five total defense from 2015-2017 scoring two knockouts and picking up three lopsided decisions he has barely lost a round since capturing the WBA strap albeit against mostly B level opposition. Lara who sports a record of 25-2-2 has often been called the most avoided fighter in boxing. His lack of a noticeable fanbase plus his Cuban style that has been labeled as boring by many despite a decent KO percentage. 14 KO’s in his 25 wins, fans, and pundits have kept him from securing another mega fight. The Cuban champ has some very solid wins on his resume including Freddy Hernandez, Alfredo /Angulo, Austin Trout, Ishe Smith and Delvin Rodriquez and Vanes Martirosyan. Impressive resume nut lacking a mega win a star-making win.

Lara had two chances at huge mega fights both times performing beautifully in outboxing and bordering on outclassing his opponents. First in embarrassing Paul “The Punisher” Williams back in 2011 to the point that HBO commentators Max Kellerman and Roy Jones Jr were pleading with referee Samuel Viruet to stop the fight. A few years later Lara was awarded with a huge mega fight, and took advantage of it and dismantled Canelo in 2014. The only problem is that Lara was robbed blind and had the decisions unjustly taken from him in two of the worst decisions in recent history. 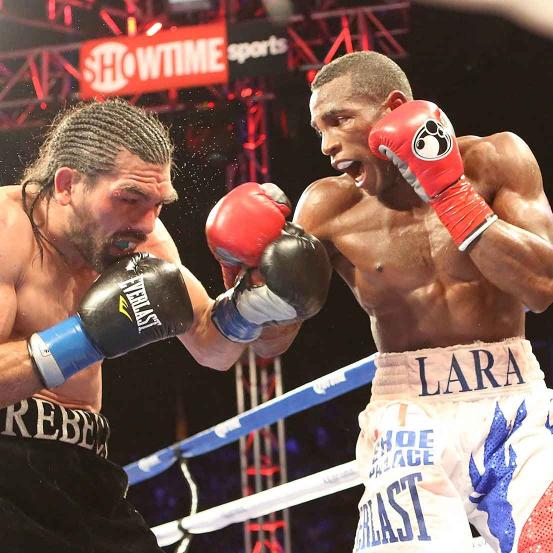 Lara who typically finds himself just outside the pound for pound elites has had a difficult time securing a mega fight in the last four years. He is viewed as a guy who just isn’t worth it. The juice just isn’t worth the squeeze. He is an extremely difficult guy to win rounds against and impossible to look good against. Plus, he doesn’t have a huge name or fan base, he isn’t someone you can make a huge payday with and there’s no way you can look good against him. So why fight him? Its a no win situation. How much differently would Lara be viewed if he had official victories over Paul Williams and Canelo Alvarez? Two fights he clearly won. He would be at or near the top of every pound for pound list and rightfully so. Lara’s trainer Ronnie Shields said after Lara’s last bout that he believes Lara is a top 10 pound for pound fighter. Now in the ultra-competitive 154 division and turning 35 next week Lara gets another and probably last chance to earn a huge victory and get the respect he deserves. Lara is already viewed as the best Jr. middle in the world. A win over Jarrett Hurd who is considered top three fighters in the division and one of the best young champs and most entertaining, fan-friendly fighters in the world. A win in this fight puts Lara in a great position to have one of two great options, unifying with the winner of Sadam Ali in New York City or taking on Houston, Texas Native, and former stablemate in a battle of the top two 154 pounders Jermell Charlo.

At the age of almost 35, and in an absolutely loaded weight class where the best is willing to fight the best, Lara is now on the verge of the superstardom and recognition which has now for seven years avoided him. The opportunity to have his name mentioned among the top names in the sport, multi-million dollar paydays and living the American Dream is now within reach, however, one giant hurdle stands in his way 27-year-old monster Jarrett Hurd.