On March 23rd, 1996, Arturo “Thunder” Gatti did typical Arturo Gatti things. This time against mostly unknown Dominican challenger Wilson Rodriguez. Arturo Gatti was making the initial defense of his IBF Super Featherweight Title at the Mecca of Boxing, Madison Square Garden, the Jersey natives backyard. Of his 26 pro bouts, this was Gatti’s 19th time-fighting in either New York or New Jersey. The then 23-year-old Gatti was already building a large local following and was coming off an epic performance in a fight of the year type of fight against Tracy Harris Patterson just four months earlier also at the Garden. It was Gatti’s initial defense and was suppose to be a bit of a soft tough. It turned out to be anything but that. In a fight that was supposed to highlight Gatti, it did just that but in a completely different way then the HBO crew and the New York fans were expecting.

HBO who originally aired the bout has since dubbed it “When Gatti became Gatti”. The opening two rounds could not have gone any worse for Thunder. 35 seconds into the fight, Rodriguez landed his first right hand, and Gatti’s left cheekbone began to swell on cue. With a minute to go in the round and being badly outboxing Gatti was pawing at his left eye which gave him all the problems in the bout with Patterson. At the close of the round, Jim Lampley proclaimed “Gatti’s getting a little boxing lesson here in round one,”. It was a dominating round for Rodriguez, he was growing confident handing 30 of 78 punches to just 16 of 61 for Gatti. Leading Larry Merchant to utter “Gatti is in real trouble unless he can do something dramatic.” If the first stanza was a disaster the second round was all-out crisis mode when Gatti’s right eye began to swell and match his troubled left eye and the real disaster struck. Thunder was floored throwing a wild left hook and was caught with a perfectly timed counter right hand by the unknown challenger. Gatti got up and made it to his feet and made it throw the round. Despite the Dominican landing accurate rights over Gatti’s left, and smothering the champ when he got close and completely nullifying Gatti’s aggression. That aggressive fighting spirit stayed on full display as Gatti marched forward, throwing thundering hooks, but mostly to no avail. When speaking of the round Gatti said “Getting off the floor kind of woke me up, I got scared when I went down. I didn’t even know I was down until I looked around. I said, ‘Oh my god, I’m gonna lose the fight.'”

The first chants of Gatti! Gatti!” rang out in the third. Rodriguez remained unaffected, landing more thudding right hands. Causing Lampley to say: “It’s going to take a near-miracle.” This time Gatti responded on cue, pinning Rodriguez along the ropes and starting a brutal exchange that brought the hometown crowd to its feet. Rodriguez took the warriors bait and stood at close range and slugged out the remainder of the round, and the young titlist drilled him with a counter left that sent the challenger wheeling backward. “This has been a time-capsule round,” Lampley declared as the third stanza concluded. Speaking of Gatti’s left eye Lampley added: “Hard to imagine that Gatti can last much longer.” After the third round, bedlam went down in Gatti’s corner. Stephen Gelfman, the ringside physician, shouted at Gatti “Cover your left eye,” “I’m all right,” the warrior responded, trying to talk his way out of trouble. Gelfman again demanded to “Cover your left eye or it’s over!” So Gatti put his glove to his left eye—for about one second before taking it away. “I said cover it!” the physician yelled. Gatti complied, then answered correctly when Gelfman twice asked him how many fingers he was holding up (two, then one). The doc exited, as apparently, Gatti answered correctly. Assist to the corner crew “It was madness in the corner,” Pat Lynch recalls. Years later the truth came out a cornerman tapped a Gatti on the back, two taps and then one tap, to help him pass his exam.

The fourth round was perhaps the round of the year. Non-stop wall-to-wall action started with Gatti loading up to the body, backing Rodriguez up with a right hand to the ribs 30 seconds into the round. Rodriguez tried jabbing, but Gatti countered with powerful right hands. The pace went from 0 to 60 to 100 MPH in the final minute of the round. Rodriguez scored with a right-left-right-left combo, Gatti took it in stride and fired back with a left hand, and Rodriguez scored violently with three more shots in return. “What is keeping these guys up?” Merchant wondered aloud. Who knows? Whoever knows with an Arturo Gatti fight. That question became more of a wonder a moment later when a left hand from the Dominican left Gatti hurt worse than at any point since the knockdown. Gatti reeled into a corner and Rodriguez swarmed and punished the champ with an eight-punch combination! Thunder was standing and trading just a few seconds later and getting the better of it just seconds after almost being stopped. As the last seconds of the round ticked down, Gatti was landing away with no response from Rodriguez. The now confident Gatti give his opponent a cocky nod of the head as to say “I got ‘cha” as he walked back to his corner.

Round five completely changes the tide of the fight. With 38 seconds left, Gatti scored a perfect left to Rodriguez’s liver sinking him to his knees. He was able to get back to his feet at the count of eight in noticeable pain. Gatti attacked like a dog on fear landing bombs to the body of the challenger. Merchant asked rhetorically, “Can you believe this kid”. Gatti kept moving forward to open round six while the challenger could no longer muster up any offense. Gatti landed a vicious double left to the head and body, in which Rodriguez tried to respond to, but the confident Gatti slipped everything. Standing in a phone booth, Rodriguez made one last rally, but Gatti got the better of the final exchange with crippling body shots. With just over a minute to go in the round, a brutal left to the body froze Rodriguez. A few seconds later, each man threw left hooks at the same time, Gatti’s landed first and landed clean, sending Rodriguez down on his back with no chance of beating the count. The championship comeback which is only rivaled only by the New England Patriots in Superbowl LI and the Mets epic comeback in game 6 of the 1986 world series was complete. After the fight, Steve Farhood wrote, “Every newly crowned champion is entitled to a gimme first defense. What we didn’t know prior to the night of March 23, 1996, was that Gatti and “gimme” simply don’t go together.” 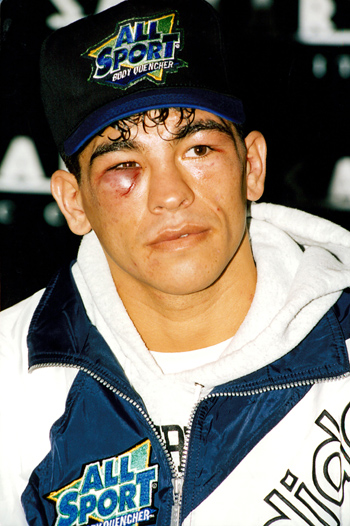 Legends aren’t born they are made. They aren’t made in just one moment they are made over time. However, there is always one moment in time where everyone goes back to and says “yea, that was his first defining moment” whether its Jordan over Ehlo or Joe Montana finding Dwight Clark in the back of the end zone. There’s a moment in time which we can look back on and say we knew something was different about that guy and it started at that moment. For Arturo “Thunder” Gatti it was exactly 22 years ago against Wilson Rodriguez at Madison Square Garden.