It was just business as usual for Ray Ximenez Jr, just another day at the office. Just two days before his first nationally televised main event Ximenez was hard at work as usual. Pounding away at a double end bag, a heavy bag and then putting on an impressive display of hand speed doing his pad work, while his Dad Ray Sr shouts instructions. It was media day at Ximenez’s gym the Montoya Boxing Gym in South Dallas. The elder Ray remains in his son’s corner as he has his whole career pro and amateur. A pro career that seemed like it just kicked off but in reality its been almost eight years.

Ximenez started his career as a teenager at 115 pounds in 2010 against a young fighter named Cristoval Larrazolo. Ximenez dominated Larrazolo dropped him twice and won an easy, lopsided decision. Now as a full grown 25-year-old man, Ximenez finds himself on the verge. With a dominating win, an impressive performance on Friday night against a quality young prospect in the Filipino Eugene Lagos at the Bomb Factory in Dallas, Texas. A bout that will be televised nationally on beIN sports. Ximenez will find himself in the thick of a title shot.

Ximenez remains calm and confident despite the fact that a great performance will push the young fighter to legitimate contender territory. When asked about the step up in competition and if this was the best fighter he’s been in with Ximenez confidently shook it off and said “Not really Chris Diaz was really good” and that “he [Lagos] wasn’t really anything special” When asked about if the national exposure and being the headline on a big card was additional pressure. The Texas native confidently said “Not really, I just want to put on a good show and hopefully in the future get a rematch with Diaz” Ximenez is 16-1 (4) and suffered his only defeat, a defeat which in retrospect doesn’t seem that bad. Ximenez lost a close, competitive and very controversial decision to a young prospect named Chris Diaz back in April of 2016. A decision many including Ximenez think that he won. The fight was in Diaz’s hometown of San Juan, Puerto Rico and in front of his home crowd get a very close and questionable hometown decision. 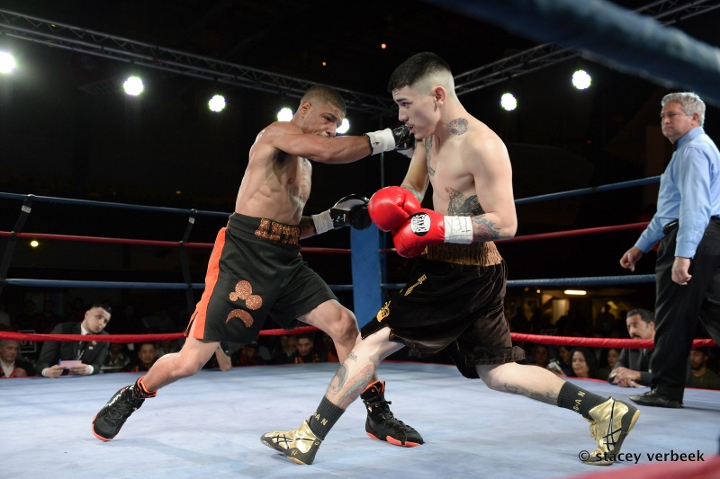 Since that fight, Chris Diaz status has risen to what some consider the best prospect in the sport. So considering Ximenez’s only loss came to Diaz, in Diaz’s hometown in what appeared to be a very questionable decision that loss doesn’t seem to be much of a setback. It is, however, a loss and a loss that Ximenez wants deeply to avenge. He said he “Has called Diaz out on Twitter” and ” I thought I did good I was outboxing him” that is the way many who saw the fight viewed it, unfortunately, the judges weren’t among the ones who scored it that way. When asked what changes he would make Ximenez said “I would change not much… I’d probably make it more of a dogfight” Agreeing that he would fight more on the inside. Which is a good idea since he and his team claimed that his increase in power is his biggest improvement. A sentiment his trainers and coaches at Montoya Boxing Gym shared saying “He’s grown into a full-fledged 126 pounder” and that “He is walking around at 140 or so pounds. In the past he was fighting above his weight class he was small for the weight which explains why he doesn’t have as many knockouts” Ximenez agreed saying he plans to stay at the weight. A featherweight division which is loaded with talent. Including mega starts Like Abner Mares and Leo Santa Cruz who are scheduled to meet each other later this year as well as Gary Russell Jr and former Olympian Jo Jo Diaz.

With an impressive showing, Ximenez will have put himself in a great position to start getting big dollar fights against the top names in the division. That all depends on getting past Eugene Lagos this Friday night. Lagos a tough lightning quick-fisted Filipino prospect, who is extremely experienced for a 23-year-old. Lagos has pulled out a victory in Russia and has also fought in Mexico and Thailand. So fighting in a foreign land in his opponent’s backyard will be nothing new for Lagos.