Tony Bellew has made a career of making a lot of noise in and out of the ring. The former Cruiserweight champion has been on the sideline for the past year waiting to get a rematch with David Haye off. So the never shy Brit sounded off on the steroid problem that is plaguing the boxing business, Bellew stated “A man dies in the boxing ring. His opponent does a post-fight drugs test, he fails it, he’s on performance-enhancing drugs. Is that man going to jail for life? Because in my opinion, that’s murder. And it’s pre-meditated murder. ” 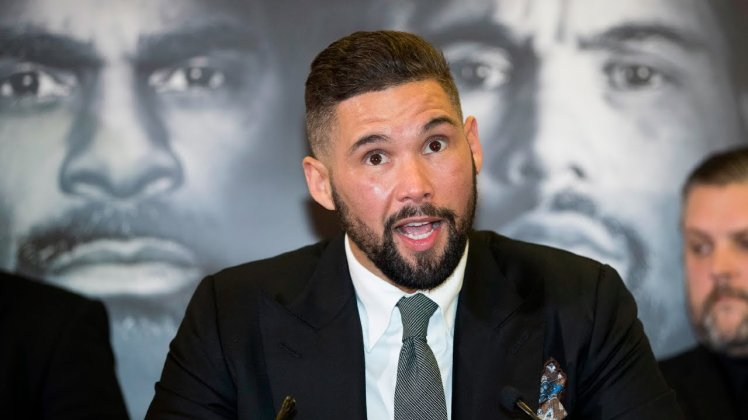 The timing of this statement is impeccable considering the state of the heavyweight division. The division that Bellew is currently fighting in. WBC champ Deontay Wilder has had multiple mega fights canceled because his opponents have failed steroid tests most recently he had a fight with Luis Ortiz that was scheduled for November in Brooklyn canceled. The fight is now back on, Ortiz is a multiple time offender. Speaking of multiple time offenders, Shannon Briggs was just called out by the last lineal heavyweight champ Tyson Fury, Fury said that he was sending the cheat a contract. So two multiple time offenders are getting a shot at the lineal champ and the current heavyweight champ. Fury himself failed a test for nandrolone, there is somewhat of a question mark near this. Nandrolone is a male sex hormone that is produced naturally and can also be produced by eating an inordinate amount of meat that contains nandrolone. There is an asterisk near this because Fury had what was ruled an “Unacceptable level” it could be that his body produces more nandrolone then normal, or that he did indeed eat infected meat. However unlikely this may be it is possible.

Boxing is fundamentally different than other sports, the outcome is not hitting home runs, scoring touchdowns or setting Olympic records. The outcome is knocking your opponent out. Hitting him so hard and so often that he can longer fight back. You are taking your life into your hands when stepping into the ring and to have an opponent cheating in such a horrific way could be viewed as a heinous criminal act. A violation that has become all too common in our sport. That is has seared our conscience to the point where we don’t even react to it. Bellew spoke to this sentiment exactly in an interview from 2016 when he said “If someone has taken steroids for months in the build-up to a fight, that advantage they have is going to be huge. There’s lives at risk, at the end of the day; it’s a fight. I’m not saying it’s ok to take drugs if you’re a 100m runner, but ultimately there are no lives at stake in a 100m race. There are lives at stake in a boxing ring and that’s what makes it so alarming.”

It is alarming, in addition to the above-mentioned heavyweights, consider the following is just a partial list of some big named fighters who have failed a PED test in the past:

This is just the beginning there is a litany of other fighters who have failed tests.

Floyd Mayweather was criticized for not making a fight with Manny Pacquiao back in 2010 for refusing to take the mega fight unless Pacquiao agreed to Olympic style testing. Pacquiao came up with a lame excuse about being afraid of needles, and being too tired and drained from giving a few tablespoons of blood, keep this in mind, the average person has 8 pints of blood. The adult heart pumps about 5 quarts of blood each minute – approximately 2,000 gallons of blood each day – throughout the body. Everyday non professional athletes give this amount of blood all the time and are completely unaffected because it is such a minute amount of blood. To think that a world-class athlete, one of the best athletes in the world, would be lost and knocked out of training because he did a standard blood test is the height of absurdity. Especially, when that same world-class athlete has multiple tattoos. To blame Floyd and say that he was demanding too much because he wanted to make sure what was the biggest fight in the sport was clean and fair is ridiculous. Why would anyone agree to a fight if the other party has any objection to a steroid test? Pacquiao wouldn’t agree to the testing till years later, this non-action speaks loudly, yes he never failed a test, keep in mind Barry Bonds and Mark McGwire never failed a test. Shane Mosley admitted to taking steroids and never failed a test. Pacquiao certainly had a right not to take the test, but when offered the biggest payday of his career to turn it down over a drug test? C’mon now! That speaks volumes. No he can’t be suspended or lose his title for refusing a test but let a little common sense kick in if your boss offered you a massive pay rise pending a drug test and you refused to take the drug test, what would it be safe to assume? Exactly!

Bellew went on to say that “People need to be made an example of. If you’ve been taking performance-enhancing drugs I suggest nothing less than a lifetime ban. Is it going to have to be that somebody dies in a boxing ring at the hands of a steroid user for this to happen? It’s going to be too late then.” He has also accused David Haye of being on steroids. Bellew is not alone in the criticism of boxers on steroids, former two weight division champion and unabashed loud mouth Paulie Malignaggi has attacked Pacquiao and others for being on steroids. In a recent interview, the Magic Man said ““A piece of me, the cynic in me, believes this is also part of the reason that boxing is not so mainstream anymore. Because the people making all the money in boxing don’t need it to become mainstream. Because if it becomes mainstream maybe it will get investigated in the way baseball was about steroids, which I also believe is a problem in boxing by the way. Maybe if boxing becomes too mainstream, maybe the Senate or the federal government will start to investigate it about how clean this sport is as far as people robbing fighters or about how clean the sport is involving steroids. The cynic in me thinks maybe the powers that be like boxing where it is now because there’s still millions of dollars flowing in it, but it falls just below the radar to where nobody pays attention.”

Bellew, Malignaggi, and Mayweather have done some heavy lifting and gotten their hands dirty on this issue. But is it to no avail? Has the boxing community, the fan base, gotten so immune to roids that it no longer cares, that the people who entertain us by putting their well being on the line are cheating in such an inhumane way that it should be considered criminal or pre-meditated murder as Bellew said?

Paulie Malignaggi: I Believe Steroids Are A Problem In Boxing