When the World Boxing Super Series tournament began last fall, undefeated cruiserweight world titleholders Oleksandr Usyk and Mairis Briedis were expected to make it this far. The final four kicked off with Usyk and Briedis meeting to unify their 200-pound world titles in Latvia. In front of a sold-out crowd of about 10,000. The biggest sporting event in Latvian sports history.

Oleksandr Usyk entered Saturday’s fight widely considered the best Cruiserweight in the world. He left the fight reconfirming that position. In an excellent action filled fight, with Bredis, who was considered by most the #2 Cruiser in all the land. Usyk out landed and out worker Breidis and earned a hard-fought MD (114-114 & 115-113 twice) 3DBoxing had it a bit wider for Usyk (117-111) Usyk had his pistol like right jab firing throughout the fight and out jabbed Briedis in every single round according to CompuBox.

Breidis landed often with good thudding shots he established himself early and even dictated the pace through perhaps the first three rounds. It also appeared the Latvian had more thud than Usyk. Briedis continued to push the pace with the harder punches. In the second round, he began really taking the fight to Usyk. The Olympic gold medal winner was starting to warm up and was landing some solid shots of his own. As the second half of the fight came around, Briedis’ work rate slowed down and Usyk began to take over the contest. Usyk will now be moved forward to the final fight of the WBSS and faces the winner of next Saturday’s semi-final unification between WBA champion Yunier Dorticos and IBF champion Murat Gassiev – which takes place in Russia. 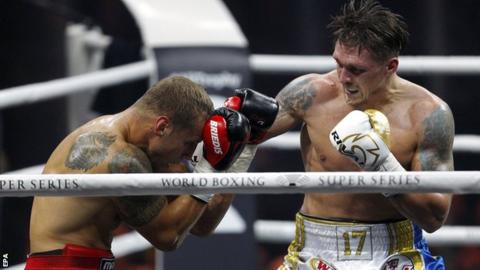 Usyk, the No. 1 seed is widely regarded the best cruiserweight in the world and he will have a major test in May when he takes on either Murat “Iron” Gassiev or Yunier “The KO Doctor” Dorticos. In Saudia Arabia in the WBSS finals. If Usyk is able to win he will have unified all four major straps and have established himself as the best cruiserweight since a young Evander Holyfield about 30 years ago. There will be just one next logical step for the Ukranian, to test out the waters in the heavyweight division.

Usyk will most likely be the most skilled fighter in the division. He has the responsible defensive high guard European style. He throws beautiful crisp combinations and has an excellent jab. His agility and footwork are phenomenal for a man that size. The major question will be, does he have the power to match up with Deontay Wilder or AJ. Will he also be able to take the tremendous power of the top heavyweights? Briedis has excellent power for a cruiserweight and was able to dent Usyk when he landed cleanly, Briedis’s power doesn’t compare to that of guys like Wilder or AJ or Big Baby Miller. Usyk will certainly be able to outbox, outwork and avoid a lot of Wilder’s shots. But can he avoid Wilder for all 12 rounds? What happens if he got caught by Wilder’s massive right hand? How will Usyk respond, will he be able to respond? Does Usyk need to bulk up? If so with the extra bulk and muscle mass take away from his agility?

At 6’3 and typically rehydrating to around 215, he is already the size of a full-blown Evander Holyfield. The version of Holyfield that KO’d Iron Mike. Uysk certainly has the size and skill to be a top-notch heavyweight and beat a lot of good heavyweights. He is only about 5 pounds or so smaller than Wilder, but how will he overcome the four to five-inch reach disadvantage he will be at with AJ and Wilder? Are his beautiful combinations, sharp job and agility and footwork enough to overcome the 35 pounds he is giving up to Joshua?

The heavyweight division is as live and competitive as it has been in over a decade. The Ukranian certainly has the ability to make a run in the division, but how far can he go? He will need the intangibles that Evander Holyfield possessed, the heart, relentlessness and the dogged determination. Uysyk has the skills but will need to embrace his inner “Real Deal” against the top two heavyweights. It will sure be interesting to see if he can do it.