The idea of Pacquiao vs. Lomachenko fight has been mentioned, but there were issues with weight from the start. Lomachenko’s handlers had no intention of taking any fight above 135-pounds, and Pacquiao’s trainer, Freddie Roach, will not allow his boxer to go under 140-pounds.

The rumors of Pacquiao-Lomachenko negotiations for a possible mega fight have intensified. Pacquiao named Lomachenko by name in an interview with the Philipino network ABS-CBN television. saying “You know, I miss boxing,” Pacquiao said, he was “still okay.” Adding “There are negotiations now about the number one pound-for-pound (boxer) which is Lomachenko, there are still talks on the weight, reducing the weight,” said Pacquiao, who has been fighting as a welterweight.

Pacquiao’s legendary trainer Freddie Roach commented that Pacquiao would not go below 140 and Lomachenko is rumored to have said that he won’t go above 135. Lomachenko typically does even fight Jr. Lightweights having fought much smaller opponents in his last two fights. So thinking he would fight a naturally bigger man seems a bit far fetched. However, Pac has always been a small Welterweight and can easily make 140, possibly even a catch weight of 137 or 138 despite what Roach is claiming. Pacquiao who last fought in the summer of 2017 dropped a disputed decision to Jeff Horn, does fit the bill of a Loma opponent as he is not coming off a win. Out of High Tech’s last five opponents, amazingly only Jason Sosa, was coming off a win in their last outing. So Pacquiao fits the bill there!

Is it that crazy though? Pacquiao is unofficially known to rehydrate to around 150 pounds, Lomachenko was only contractually allowed to rehydrate to 138 pounds for the Rigo fight, he is known in other fights to rehydrate at least 10 full pounds meaning around 140. So Despite the fact that Manny fights at 147 and Loma at 130 is sort of irrelevant as they really are only separated by 10 pounds in actuality. In Loma’s last fight Rigo included a rehydration clause at 138. if these two made a fight at 140 pounds and put a hydration clause in at 148, Manny would enter at that weight, and Loma who is rumored to want to go up to 135 would probably walk in somewhere between 140-143. We are now looking at a relatively small size advantage for Pac. 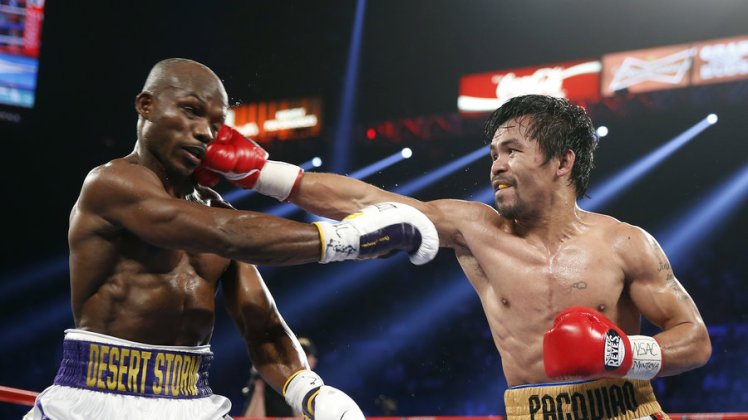 3DBoxing is not promoting this fight as we stick to our philosophy of fighting the best guys at your own weight class. Both of the 130 and 147-pound divisions are loaded with supreme talent. Tank Davis, Miguel Berchelt, and Tevin Farmer are all waiting for Loma. For Pacquiao, he clearly has an overload of talent in the welterweight division. So we see no reason to make this fight. But let’s make this match for the sake of this conversation and lets put it at 140. This fight makes a ton of sense for both fighters and the Promoter Bob Arum and Top Rank. For Pacquiao, whose name has also be linked to Mike Alvarado, gets a mega fight that is winnable. At this point in his career, Pac would most likely not fair well with Bud Crawford. The Loma fight he will have a size and power advantage of Loma. It will be a mega payday and probably a PPV fight that could generate close to a million buys. If Pacquiao should win he will reestablish himself as legit. He will have beaten a guy that is considered P4P #1 in the world. For Loma, he has a shot to be the Manny Pacquiao of the new era. He can move up in weight classes and take out legends. He will have established himself in front of casuals and part-time fans as the guy that retired Pac Man and as a PPV star. Setting himself up as the face of the sport and huge paydays.

The fight itself would probably be an entertaining conflict of styles. Two superbly athletic and mobile fighters. Pacquiao’s high punch output and whirlwind style will certainly create issues for the smaller Loma. Lomachenko, the pivot king, will have to be exceedingly careful to not get hit as he can ill afford to exchange with Pacquiao. Pacquiao will most likely not have the same respect for Loma’s power as he did for say Mayweather and will open up more offensively. If the pivot king can consistently avoid the offensive barrage that Pac Man can offer up, he can counter and beat Pacquiao all over the ring. The contrasting style will certainly make for an entertaining fight and the winner will be in line for another huge PPV mega fight.