Evander Holyfield and Floyd Mayweather are polar opposites. From their personalities outside the ring to their styles in the ring. The only thing they will share is a place in the International Boxing Hall Of Fame. Holyfield was the humble warrior always giving the credit to God and never braggadocious or egotistical, extremely confident but always humbled. In the ring there was never a scrap Holyfield shied away from even with heavyweights that outweighed him by 30 pounds or more. Money Mayweather is loud and outspoken, who never saw a trash-talking battle that he didn’t like and has never passed on an opportunity to praise himself or talk about his accumulated wealth. 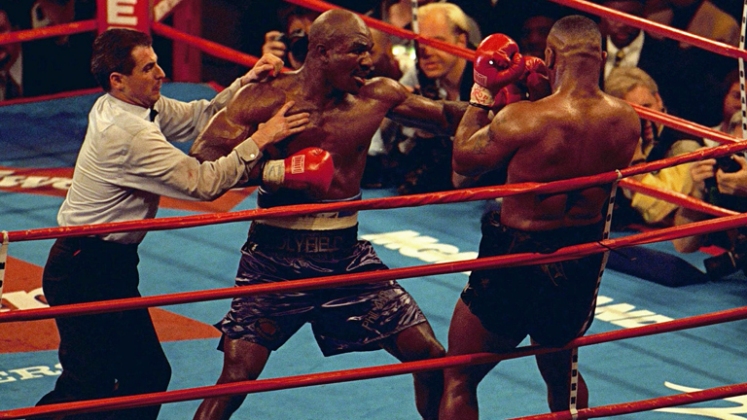 Evander Holyfield was the undefeated, undisputed champion of two weight classes, he cleaned up the Cruiserweight division in the 80’s and the heavyweight division in the 90’s. There was never a challenge to big for the Real Deal. His primary goal was to unify all the titles and leave no doubt and he was successful in that endeavor. Money Mayweather, on the other hand, was an undefeated five-division champion who was undisputed in zero of them. Not a single division. His primary goal was to accumulate a perfect record and as much money as possible he was certainly successful in hitting that mark. Floyd Mayweather is a once in a generation talent who is hands down the best fighter of his era. He dominated the likes of Genero Hernandez and Diego Corrales at 130 pounds and equally dominated Canelo Alvarez at 154 pounds. Evander Holyfield was a very talented offensive fighter with a once in a generation spirit and will. Called boxings warrior spirit Holyfield represented everything fans loved in a fighter. Mayweather represented the perfect boxer he is the ultimate hit and not get hit magician and in-ring genius. If a brick wall was put in their way Mayweather would circumnavigate the brick wall while Evander would run head first through it.

In a recent response to a question about Floyd Mayweather, the former four-time heavyweight champion responded “My whole thing [is this], he is a great fighter. But to actually say that [he’s beaten everyone], you’ve got to be the undisputed. You need to get all the belts at one time and let everybody know that I beat everybody who had a belt and I am undisputed. You can’t just say ‘I got this WBC belt, I got this WBC belt and I got this WBC belt,’ and all of them are WBCs and you don’t got the rest of the belts to say you are undisputed…That’s the only thing that Floyd is missing because he was never the undisputed world champion in any weight division.” 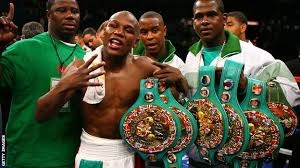 The Real Deal raises a real point, there’s no question of Mayweather’s greatness, but to not unify a single division is somewhat remarkable. Holyfield was never cautious in taking tough fights, whether it was Riddick Bowe, Mike Tyson or Lennox Lewis or unifying the Cruiserweight straps. Floyd was much more careful, even in the 130-pound division when Floyd seemingly fought the best such as Chico and Manfredy and Genaro Hernandez, he never donned more than just the WBC title in the weight class. He opted not to fight Joel Casamayor or Steve Forbes. He then moved to lightweight and won the WBC in controversial fashion against Castillo and decided to defend it against a C level fighter in Victoriano Sosa and Phillip Ndou instead of unifying with a Paul Spadafora or a Leonard Doroftei and then instead of facing the newly crowned Juan Diaz he jumped to 140 and took on DeMarcus Corley  and seems to have gotten real cautious he opted to take a fight against a truly C level fighters, a dude named Henry Bruseles and a totally washed up Arturo Gatti for the WBC. . Instead of unifying with Kostya Tszyu or Vivian Harris or Miguel Cotto. At 147 Floyd won the IBF off of Zab who was coming off an embarrassing loss to Carlos Baldomir and then took the WBC from Baldomir, then took the WBC Jr Middleweight title from De La Hoya, a belt he never defended, vacated and went back on to unify against Paul Williams or Antonio Margarito or Kermit Cintron or Miguel Cotto? Nope, he defended against Ricky Hatton and then vacated his belt and took a year and a half hiatus. 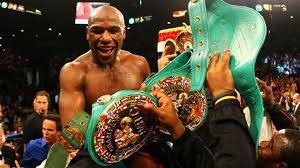 Upon his return, Floyd won the WBC title against Victor Ortiz , won the WBA 154 pound title finally against Cotto and moved back down to 147. Again took the WBC strap from Robert Guerrero and then instead of unifying he went back to 154 to fight Canelo. Took his WBC . Went back down to 47 and did unify the WBA belt from Marcos Maidana and then took the WBO against Pacquiao. Leaving just the IBF and a mega fight with Kell Brook, and Mayweather opted and for no reason, in particular, to take on Andre Berto. Then retired for 2 years again and returned to fight some guy with zero fights.

There are seemingly so many names missing on Floyd’s resume especially at 140 and above Paul Williams, Kostya Tszyu, Tim Bradley and Antonio Margarito, and that’s a pre-hand wrap controversy Margarito, and so many fights that he pushed off and pushed off like the Cotto fight and the Pacquiao fight. Holyfield won his titles and went to unifying right away. He made the huge mega fights with Bowe and Lewis right away. He tried and tried again to make the fights with Tyson that fell apart in the early 90’s twice for various reasons. If Mayweather’s retirement is permanent he will go down in history as the best fighter of his era and an undefeated 50-0 fighter who won straps in five different divisions. However, he will not go down as the undisputed champ of any weight class. So if he can never claim to have been the undisputed man in any weight class ever, how can he claim to be TBE?