The WBO is at it again. Terry Flanagan Vs Maurice Hooker has been made official for April, 14th and for the vacant WBO 140 pound title. A tile left vacated by Terence Crawford who is leaving the division.

Terry Flanagan is the former WBO lightweight champ, a title he won back in 2015 by stopping Jose Zepeda who quit in the second round.  Turbo followed up with another sensational knockout over big time American prospect Diego Magdaleno. “Turbo” Flanagan defended his WBO lightweight title a total of five times. The problem is he has never fought at 140 pounds, nor did he unify any of the straps at 135 nor was he ever viewed as the best at lightweight. So how exactly is he fighting for the vacant WBO 140 pound strap?

More interesting is who Turbo will be squaring up with on April 14th. Dallas based Maurice Hooker. The unbeaten Hooker is known as “Mighty Mo” the problem is that he is hardly known at all outside of die-hard Texas Fight fans. No one considers Might Mo a top 10 jr. welterweight despite putting together a couple of good victories in 2017 winning lopsided UD’S over the veteran Cristobal Cruz and then-unbeaten prospect Courtney Jackson. The problem with this is that the only big name on Hooker’s resume is veteran Darleys Perez. Perez has been outclassed everytime he has stepped up, being knocked out by Luke Campbell and Anthony Corolla and dropping a lopsided UD to a prime Yuriorkis Gamboa. Hooker managed to get a draw against Perez, although most thought he was lucky to get the draw. A draw with a fighter that isn’t up to world-class challenges hardly qualifies you for a shot at a vacant title.

So The WBO has decided that the two best options to fill a belt that was most recently donned by Terence Crawford, is a guy that has never competed at the weight and an unknown prospect who in his biggest test was only able to muster up a draw against a B level guy who gets outclassed every time he steps up. Thee 140-pound division may not have a megastar or a huge draw. However, there are many top-notch fighters who have earned this shot. Julius Indongo and Feliz Diaz, for example, have put together good wins at the division and have a much better resume and thus claim for a vacant title. Prospects like Josh Taylor of the UK and Yves Ulysse have put together real good wins recently. John Molina is coming off of a sensational victory and unbeaten Antonio Orozco, who is now 30, has not yet earned a title shot despite putting together very solid W’s against the likes of Keandre Gibson, Miguel Acosta, Humberto Soto, Emmanuel Taylor and Steve Forbes. 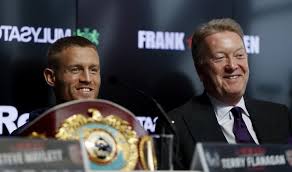 Any of the aforementioned fighters have earned a shot at a 140-pound title. As good as Turbo Flanagan is he has never fought at the weight and didn’t clean up the 135-pound class so how exactly did he get this shot over the above names? As a Dallas area based publication we support our hometown fighters and have seen a lot of Mighty Mo Hooker, but his resume and credentials for this type of fight leave something to be desired. The WBO rankings have often left many puzzeled and has earned itself the reputation of being called the WBOgus. Simply ask yourself this question, what’s a better fight for a 140-pound strap, Hooker vs Flannagan or Julius Indongo Vs Josh Taylor?