154 just got a lot more interesting. There is a lot of talk about exactly what newly crowned WBO champ Sadam Ali will do with his strap.  Rumors have circulated of a Kell Brook fight, a mandatory against #1 contender Liam Smith or Sadam vacating his belt and moving down to 147, and rematching with Jessie Vargas at  his more natural weight  or forcing his way into a big fight with one of the big names in that division.

For a former Olympian that looked like he was never going to reach his potential just a year and a half ago when getting knocked out by  Jessie Vargas, he certainly has plenty of options and big money opportunities on the table. Don’t Mikey, Danny and Errol wish they would have more seriously considered taking this fight when it was offered to them? A win over a legend like Cotto puts them in a big money position and opens a lot of doors like it just did for Ali. 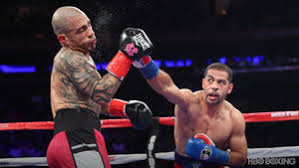 Sadam Ali is going to be overlooked at 154 and constantly have his chin questioned because he was knocked out be Jessie Vargas at 147, Vargas who has just 10 knockouts in his 27 victories is certainly not considered a puncher. However, when considering that more closely, Vargas rocked the cast iron jawed Timothy Bradley with one shot had him out on his feet to the point where many in the StubHub Center including Vargas himself thought that referee Pat Russell had stopped  the fight,  when he accidentally stepped in at the 10 second warning and had there been 30 seconds left or a minute left Vargas was on his way to stopping Bradley who was out on his feet. So in retrospect, Vargas may not be as feather fisted  as his record shows. He is also going to have his power highly questioned as he barely carried a 50% knockout percentage at welterweight so how is his limited power going to translate when he moves up to face the elite fighters at Jr Middle?
The World Kid is a highly skilled, highly athletic fleet of foot pure boxer who can frustrate  a lot of the 154 pounders. He was able to stand up to the best shots that Cotto landed and Cotto landed plenty of clean shots in the first half of the fight. His power was certainly snappy enough to catch Cotto’s attention and stop him from just walking through and coming straight forward. Ali is going to be viewed as the 154 pound champ who you can go take his belt from. Not so sure that that’s the case, many saw him as a “cherry pick” we saw how that worked out. J-Rock and Jarrett Hurd have major flaws, Ali doesn’t. Ali has the skill set to give those guys trouble if he has the discipline to not trade and get into heavy toe-to-toe exchanges with the much bigger and harder hitters. Its going to be difficult to put rounds in the bank against him and difficult to win decisions against him if Ali stays upright.

In the post fight post fight press conference the newly minted champ said “I dared to be great and I seen an opportunity, I didn’t run from it, I wanted it. You know, I’m not in this sport just to take easy fights. Sometimes you gotta take the big one and this was mine and I went out there and I shocked the world.” As a local Brooklyn kid he will be able to move tickets at the  Barclays in his hometown. The other top Jr middleweights all have recently fought at the the Barclays as well and drew a decent crowd. Factor in a hometown kid who use to win the NYC golden Gloves and has a hometown fan base he can bring everyone in that division a bigger crowds thus a bigger paydays. If he is willing to seek greatness like he said and test himself against, Charlo and Hurd and Lara and Brook and factor in a NYC  Vs Philly rivalry with J-Rock Williams and the 154 pound division maybe the most entertaining and loaded in the sport right now and Ali is right in the middle of and has some clout to call out the other top guns in the division.