It was another interesting night for the once all-world Cuban sensation known as “El Ciclon” or “The Cyclone”. He walked away with a controversial decision from Jersey based tough guy and local favorite Jason Sosa. The fans at the Theater at Madison Square Garden booed the verdict and perhaps Gamboa caught a break. 3DBoxing had it (94-94) 6-4 in favor of the Cuban but the knockdown in the 7th and the point deducted from Gamboa for holding in the final round made it even. Gamboa seemed to win rounds earl throwing combinations in spots and good movement. He showed small 30 second intervals of what made him great but was relegated to holding and low out punch. Sosa seemed to come on strong with a ferocious body attack in the second half of the fight, but was reluctant to let the hands go. Many of the rounds were close and difficult to score and at the end of the night the judges preferred Gamboa’s 30 second intervals as opposed to Sosa’s body punching.

On a positive long time NY based Ref Ron Lipton took charge of the fight right away and warned Gamboa for holding early on. Doing the aging and fatigued Cuban fighter no favors, but kept the fight moving and entertaining. It caused Gamboa to be defensive as opposed to lazy and lethargic. Lipton needs to be on my big fights and more main events in NY and more refs need to follow his lead. 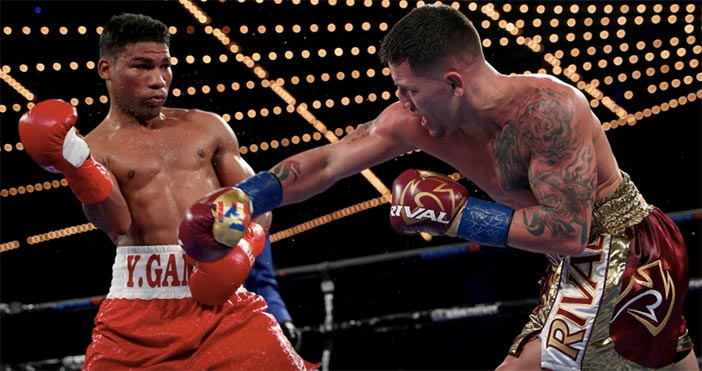 Gamboa, certainly didn’t look good in getting a close decision over worker bee Jason Sosa. However Sosa was recognized as a top 5-10 130 pounder by all publications and metrics. He also took the fight on short notice, just three weeks, with a brand new trainer, highly touted Cuban amateur trainer Pedro Roque Otano. Roque Otano has coached athletes from multiple countries to 35 Olympic medals including 11 golds. So if we want to put a positive spin on it Gamboa beat a top 5-10 Jr Lightweight as a fill in on three weeks notice with a brand new trainer, a highly decorated trainer who has had great success with countless Cuban boxers in the past. This would of course be ignoring that he filled in for Robinson Castellanos who knocked Gamboa out just a few months back and not to mention in Gamboa’s last performance he narrowly escaped with a majority decision over journeymen Alexis Reyes. Putting that to the side, Gamboa for the first time, perhaps since 2014, has something to build on.  A victory over a named opponent and a working relationship with a world renown trainer and he still has a name.

So whats next? “El Ciclon” actually has a few options. A rematch with Jason Sosa would work, both fighters can draw a crowd. A rematch with Robinson Castellanos also works, the first fight was entertaining, let’s see if a new trainer can help Gamboa set the record straight. Moving forward Gamboa probably wants to avoid big punchers, his combination of, age, terrible balance and a suspect chin. So Jezreel Corrales, who also has sensational skills, he also lacks power and is known to fade late in fights would make for a really interesting match up. A fight with Jose Pedraza at the Garden would be another fun fight on an undercard. But is this the ceiling? The winner of Loma/Rigo fight, that doesn’t bode well. The two other 130 pound champs, Miguel Berchelt, would maul him to death and the young Alberto Machado wouldn’t certainly test his chin and probably catch him sleeping at some point. The IBF title is currently vacant.

What makes “El Ciclon” so interesting, even in his prime as good as he was. He was flawed. A s sensational as his hand speed and foot speed was and how sharp and precise his power was. His power was off, his footwork was all over the place and chin suspect. He got knocked down seemingly every fight. For better or for worse Gamboa was the crown jewel of all Cuban prospects. That all changed in 2014, when he met up with Terence Crawford. Gamboa came out strong winning the first few rounds against the bigger, stronger Crawford who eventually stopped Gamboa in the ninth round. Also, in that year he got caught up in a domestic abuse arrest and was listed in the Biogenesis list the put Alex Rodriguez out of MLB for an entire season.

That’s all behind him now, before any of that Gamboa had put together sensational victories. Big time victories over names like Orlando Salido, Jorge Solis, Daniel Ponce De Leon, Darleys Perez, Rogers Mtagwa and Jonathan Victor Barros. Can Gamboa reclaim any of what made him special in those fights? Can he reclaim any of what made him El Ciclon de Guantánamo. The final chapter is about to be written.