The super flyweight division is among the hottest in the game today. It features an amazing amount of talent from all corners of the earth and has been the home to some of the most competitive fights in 2017. Fortunately for fight fans, there’s  plenty of young talent developing in the wings, and the 115-pound division promises to be an elite weight class for years to come. Among the hottest prospects in the weight class is hard-hitting Filipino Jade Bornea, who hails from General Santos City, which fights fans will recognize as it is the same city that the legendary Manny Pacquiao comes from.  The city may have another mega superstar on their hands, the undefeated prospects sports a perfect 9-0 (6) record power in both hands, excellent hand speed, patience and a furious body attack. At Just 22, years old he has yet to fight outside of his home country but that will most like change in the near future as Bornea is putting the Super Flyweight Division and the Boxing world on short notice. I was able to sit down and interview the Filipino prospect:

3DBoxing (GK)- You are from General Santos City  Philippines. There have been so many good young fighters from the  Philippines, when did you get into boxing and how big is boxing getting in the  Philippines
JB- I started boxing when I was 11 yrs old.. as an amateur, I have won gold medals from local competitions and became a part of the Philippine National team in 2012.. Where I have also won medals from international competitions.

3DBoxing (GK)-  You are from General Santos City, the same region as the legendary Manny Pacquiao, how much of an influence has he had on your young career?
JB– Manny Pacquiao is every boxer’s inspiration.. knowing how hard he’s been through before and how dedicated he was when it comes to boxing, I look up to him and I wanted to be like him in the future. I have met him sometimes and it amazes me how he remains humble in all his achievements. He also promotes boxing competitions here in Gensan which helps showcase young boxers talent and improves the quality of boxers in the Philippines.
3DBoxing (GK)- Your twin brother Jake is also an excellent young fighter. Who fought at Wembley arena against  Andrew Selby… Do you guys train together?  Do you motivate and push each other to be the best.
JB– Yes we train together ever since we started boxing.. and we both became part of the National team. We have each others back in all our fights.. and motivates each other to give our best in everything.

3DBoxing (GK)-  We’ve seen a lot of Filipino fighters in recent years in the US, many of them have had different styles but usually, they have provided entertaining fights. How would you describe your  style
JB–They say that I am a counter puncher, but for me, I think I can also give an entertaining fight, my style actually depends on the opponent. 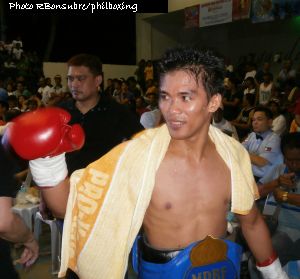 3DBoxing (GK)-  You are in the Super Flyweight division (115 LBS) its an absolutely loaded division right now, one of the best in boxing.  You are only 22 years old and have a perfect 9-0 record, what are your plans, how soon would you want to be fighting the best guys in the weight class and fighting for world titles?
JB–If the opportunity comes next year, I hope I can fight for a world title with the best opponents.

3DBoxing (GK)-  The Filipino boxing community is getting really big in the US do you have any plans or dreams to fight in the US?  Great Fight cities like New York, Los Angeles,  and the San Francisco Bay area have thriving Filipino communities that love boxing, would you want to fight there, you would have a natural fan base, you could sell a lot of tickets.
JB — Fighting in the US is actually one of my biggest dreams. If given a chance, I want to fight for my country and make all Filipinos proud just like what Manny Pacquiao did.
Good luck with your upcoming fight in November and hope everything goes great in training camp you have a really bright future. Thank you and God Bless and keep me up to date on your career.
Thank you for choosing me to be featured in your website. It’s an honor. God bless