The 135-pound  division was already chock filled with British talent, from Antony Corolla to Ricky Burns to Terry Flanagan and Luke Campbell. There may be a new sheriff in town, the mostly unheralded  Lewis Ritson had an absolutely star-making performance on the Ricky Burns/Antony Corolla undercard.  Entering the fight with Robbie Barrett for the British lightweight title Ritson was a slight underdog. 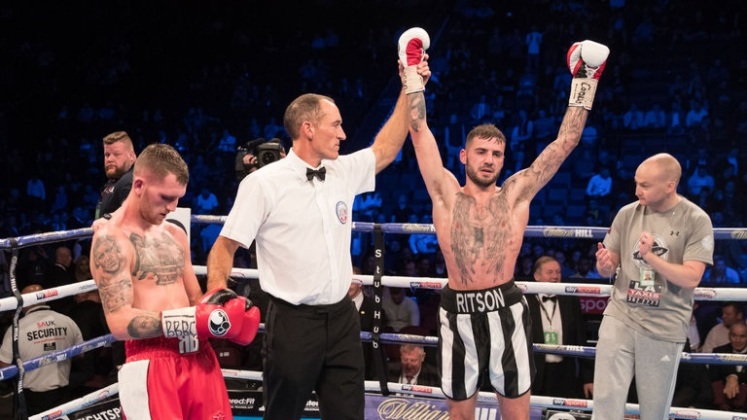 Ritson stalked and walked down his man from the opening bell. The Sandman was an absolute nightman for Barrett landing at will with lead right hands and hooks as the announcers pointed out in the opening stages “Ritson was oozing with confidence” and Barrett could do nothing to shake that confidence or to stop the assault from the Sandman whos two-fisted attack was devastating. In addition to the two-fisted power that Ritson demonstrated, he also showed off freakish strength for a 135 pounder, a good jab, and slick head movement in avoiding the limited offensive Barrett did muster up.
Ritson produced an emphatic seventh-round stoppage of Robbie Barrett in taking his  British Lightweight title in Manchester. Ritson,24, who is from Newcastle destroyed Barrett. Outclassing him from the opening bell and dropping the Yorkshireman on four occasions. Barretts’s corner finally saw enough of Ritson’s crunching combinations constant stalking backing Barrett into the ropes  ‘and continually unloading, onto the game Barrett who would rise to his feet only to be dropped again.  The Sandman sensed that the finish was near and oozing with confidence, he relentlessly fired away on Barrett, repeatedly landing flush combinations in a torrid 7th round for the Sandman. The end came when, after Barrett was again dropped by a body shot, and Barrett’s trainer mercifully threw in the towel.

After the fight, the newly minted  British Lightweight champ improved his record to 13-0 (7) and signed with Eddie Hearn and Matchroom  Boxing. Ritson commented “I think Eddie has penciled in my first title defense for December time, squeezing one in before the end of the year. Then maybe February or March back home in Newcastle with Josh Kelly too. Eddie’s the boss now, so I’ve got to wait and see what he says and where the next fight is Scott Cardle and Sean Dodd are two of the biggest names on the domestic scene so I would love to fight one of them next.” Perhaps the kid from Newcastle who has just signed with Eddie Hearn and Matchroom should set his sights abroad. With the lightweight division wide open and Eddie Hearn making a big splash in the US a fight with Golden Boys Jorge Lineras or US fighters Mikey Garcia, Tank Davis, or Robert Easter Jr could be on the horizon.

If there were any questions about Ritson’s power those due to his modest KO percentage those were certainly answered with this multiple knockdown, knockout performance over Barrett. There was suppose to be a mega-prospect from the UK at 135 pounds it was Luke Campbell, perhaps there still is that prospect but perhaps it’s Ritson, not Campbell