Terence “Bud” Crawford is the undefeated undisputed 140-pound champion and perhaps the best fighter on planet earth. He is also beloved by hard cores and by his Nebraska faithful as was evident on his August 19th homecoming and destruction of Julius Inongo. Bud Crawford who makes a ton of noise in the ring has and lets his action in the ring do his talking for him.  He said in the post fight interview that he didn’t do the interview, the day before the fight because the contract said he wasn’t contractual required to. Then he recently sent out a tweet saying “Glad everyone seen and noticed how ESPN promoted my fight compared to the other two”  Speaking of the Pacquiao/Horn fight and the Lomachanko/Marriaga fight.

This needs to be addressed on a few level. First I’ve already argued that Bud is second to only Aaron Pryor as the best Jr. Welter ever. Crawford saying I didn’t do the pre-fight interview the day before the fight!!!!!!! because the contract said I didn’t HAVE TOO !!!!  A la Marshawn Lynch before the Super Bowl. Is only spiting yourself. This is an individual sport and not getting your name out there and selling your fight when you’re the A side only hurts your brand. Bud, News Flash!!! This ain’t the Superbowl, you ain’t getting 100 million viewers no matter what. You need to sell yourself. I am not saying you need to act like a clown and be something you’re not like Broner, you don’t have to be an arrogant “character” like Money Mayweather. But you need to make yourself available. Andre Ward is the ultimate nice guy, but he makes himself available, Ward has been criticized for even being boring in the ring (I disagree) he made $6.5 million for his last fight. No one has ever accused Bud of being boring and is in a weight class where he can make mega fight after mega fight. Since his layoff, Ward has made himself more and more available. Now he is making prime dollars. Bud has a chance to make huge money if he moves up to 147 and takes on Thurman or Spence. If he could win those fights, but he has to sell himself. Call out Pacquiao, make Pacquiao take the fight, after Horn. Hard cores know Bud will win, but the 3 million casuals or so that tuned into the Pacs last fight don’t know that. When Crawford dismantles Pac, like Pac did to Oscar there will be a changing of the guard. But Bud has to make that fight happens and I don’t mean a few minute interview where Bud tells “Sway in the Morning” yeah I wanted that fight. Call him out tell him how you really feel, you’d knock him out, you know it, we know it, tell the world you’d knock him out. Make Manny take the fight.

Bobby Arum and Top Rank has the best fighter (arguably) in the world in the absolute prime of his career. Who is about to move up to the premier weight class and is from America’s heartland, and is an all around good guy from all accounts. And Arum wants to Promote a 9-1 fighter as better than Ali. It boggles the mind a bit. Especially When the 9-1 fighter does worse television ratings and fights in front of 4,000 fans in remote venues. As oppose to Crawford who beats him in the TV ratings by upwards of 30% percents and beats him in ticket sales by oooh about 300%. It just doesn’t add up. Crawford is by all accounts a bigger draw than Loma period. 140-147 lbs is kind of the thresh hold. Much smaller than that, Americans don’t really have much lasting interest. Yea, there are some rare exceptions here and there but they are few and far between and don’t have much-staying power. Why wouldn’t Top Rank want to promote the hell outta Bud? He’s the best fighter in the world! He can call out any fighter in the world and it would make a great entertaining fight. You’re the Promotions, promote your fighter. This man is buzz saw set on automatic chopping everything down let the world know. Do your job. 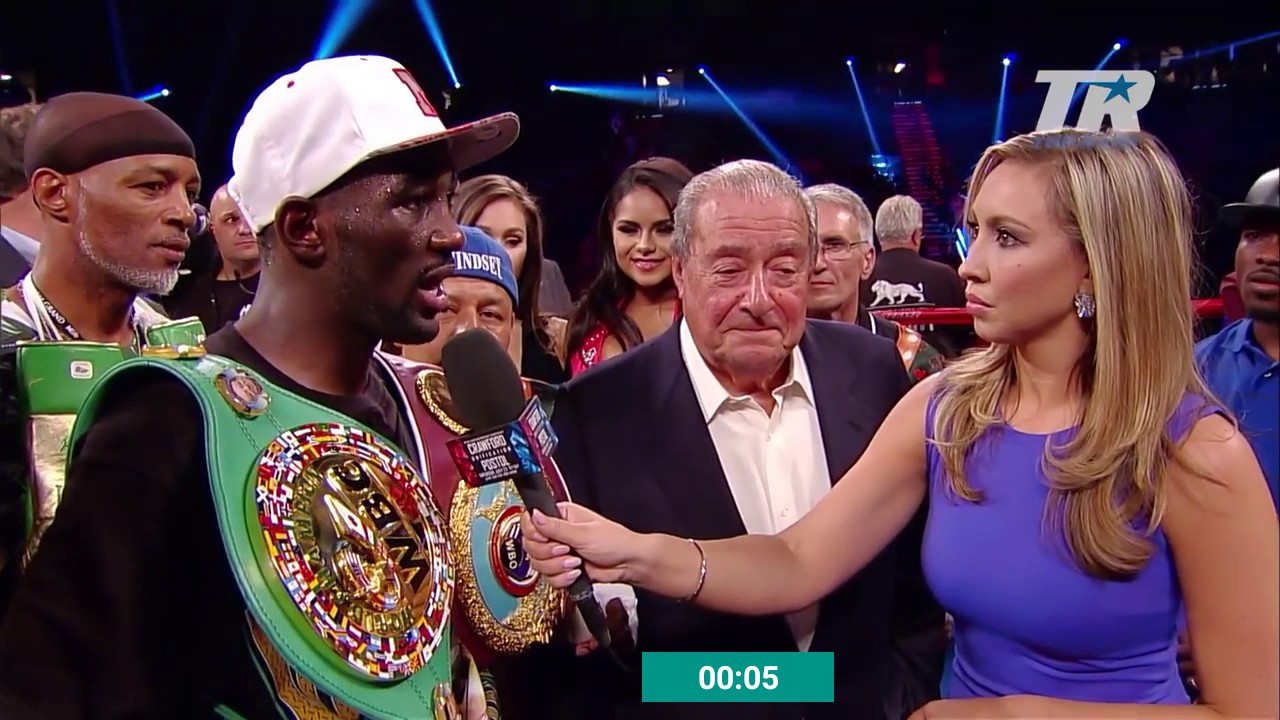 ESPN is making cuts to the budget and selling off assets like it was Blockbuster, despite that it made a fairly large investment into boxing. Despite that investment into world class boxing, it’s done a dreadful job of covering it and an even worse job of promoting it. ESPN is hemorrhaging money and viewers at break neck speeds. While they are talking soccer, women’s softball, Colin Kaepernick, what team Kyrie Irving will be traded to for the sixth week in a row (it’s the Celtics) and preseason football highlights. It’s losing sports fans. I have no clue who ESPN is trying to appeal to but it isn’t working. It sure as heck isn’t the boxing fan. They’ve embarrassed themselves with hard core fight fans over and over again and haven’t tried to grow the base outside of that. They promoted the Pacquiao-Horn fight.  Ok, Pac’s a crossover mega star who is considering retirement. That’s not going to grow the sport. They promoted the Loma fight eeeh…. a little bit, 126-130 don’t move the needle not in America especially feather fisted ones. So calling him better than Ali isn’t only silly, it’s not really going to grow the sport. Bud, who can do it all in an entertaining weight class who fights in the same weight class as guys like Pacquiao, De La Hoya, Mayweather etc… Who can dethrone Pacquiao and make mega fights for years to come on your network can help grow the sport can help bring an interest in the sport. If ESPN isn’t smart enough to recognize that, which they aren’t, they probably aren’t the right fit for boxing.

Boxing right now is a niche sport, it really hasn’t mattered much if you put it on basic cable (ESPN) or HBO, premium Cable, the ratings stay the same. Boxing fans will pay for HBO just for the boxing as the numbers bear out. Boxing hard cores like us, live in a bubble, we need to realize that. There’s about a million of us in the country and that’s it! Walk into your local barber shop or sports bar and ask your average sports fan looking at a baseball or basketball game if they know who Terence Crawford is. 8 out of 10 at least aren’t going to know who he is. 10 out of 10 aren’t going to know who say, Badu Jack is. That’s just a fact that. It is hard for people in our bubble to acknowledge. If we want our sport to grow that needs to change and that needs to bear out in the numbers below

Nielsen rating 965,000 up only 4,000 from the fight on Diaz fight on HBO despite having 55 million more possible viewers