If you are reading this you are probably too young to know firsthand the awesomeness that was Salvador Sanchez. This August 12th marks the 35th anniversary of his tragic passing.

At the age of 23, I was living in a studio apartment just out of college barely getting by. I had no idea what I wanted to do with my life. I hadn’t found Christ in my life, or my wife or my career. I was still a basically a clueless kid. At 23, Salvador Sanchez had won the WBC featherweight title, cleared out the division and defended the title 9 times. Including against legends such as Danny Lopez whom he knocked out twice, Juan Laporte, Wilfredo Gomez and his final conquest a devastating knockout over the legendary ol’ professor Azuma Nelson. He was being primed for a move up to 135 for a megafight with Argentine champion Alexis Arguello.
The was really no telling what the limit was for the fighter from Tianguistenco, México. It looked like a rematch with Laporte was going to be made and a showdown with Arguello then who knows? Arguello who at 23 had already made multi-millions of dollars and had millions more guaranteed was already talking about retirement as he had invested his money quite wisely in real estate deals. Showing his intelligence inside and outside of the ring. Whether or not he could have actually walked away from the ring while just entering his prime would have been just as unique as his ability in the ring. Chava wasn’t a good fighter, he wasn’t a great fighter, he was a special fighter, a once in a generation fighter that you tell your children, grandchildren about. At 23 he had just knocked out all-time great and then undefeated Azumah Nelson and defended his feather weight title for the 9th time. Compare that to what the best fighters of today have done at the same age.
GGG- Had not yet turned Pro
Bud Crawford- Was 13-0 and his best win was over a dude named Anthony Mora who was 15-6 having lost 6 in a row
Andre Ward- has 10-0 had wins over had a few decent wins over guys like Andy Kolle, Darnell Boone, Kenny Kost.
Errol Spence- 3-0 best win over someone named Richard Andrews (5-2-3)
Mikey Garcia- 24-0 had a win over Walter Estrada and won a minor USBA Featherweight Title against a fighter named  Tomas Villa, and was in line to fight Matt Remillard but no world titles yet.
These are the best fighters of today’s era, you see the difference. Chava was already the best fighter on planet earth these other guys weren’t even close yet. Chava had already cleaned out 126. he could have gone up to 135 and who knows how high maybe 147?  Chava was the best fighter pound for pound on planet earth at that point of his career. Today’s guys aren’t even close. 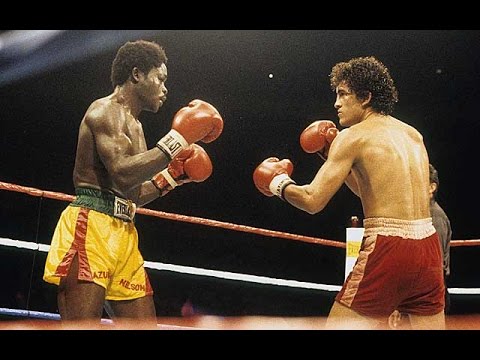 Recently I ran a piece on the 6 guys regardless of eras that would have beaten Mayweather, Salvador Sanchez was of course on that list.
Born to a lower-middle-class family in Santiago Tianguistenco, Sanchez he boxing at the age of 14 and dropped out of school two years later to turn professional. Having moved to Mexico City, he was introduced to a lawyer named, Juan Torres Landa, who had served as an adviser many other Mexican world champions. His rise in the ranks was meteoric. It is rumored that Sanchez had just 4 amateur fights before turning pro. The only blemishes on Sanchez’s record came really early on and include a split decision loss and a draw, against Antonio Becerra and Juan Escobar respectively. After climbing off the canvas twice to escape with the draw in 1978, Sanchez changed his management and hired trainer Enrique Huerta. Huerta is credited for transitioning him from brawler to a boxer-puncher. It was this transition and developing him from the slugger into the superb counter puncher that would he would become that took him to a different stratosphere. 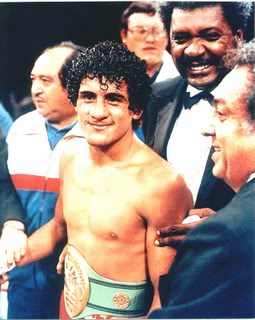 When Sanchez finally challenged Danny (Little Red) Lopez for the featherweight crown in February 1980, Mexican critics and boxing pundits thought Sanchez was being fed to the lions and the bid premature as Chava was too green at only 21. But Sanchez scored a 13th-round knockout and, in a return bout four months later, Chava again won, this time knocking out Lopez in the 14th round and sending him into retirement.
Salvador Sanchez is unquestionably one of the greatest fighters in boxing history. However, due to the brevity of his career, he is often forgotten about or overlooked by many boxing historians. When looking at his impact both in the ring and socially it’s hard to deny the WBC featherweight champ deserves recognition. In just a seven career Sanchez amassed a 44-1-1 (32) record, ducked nobody, fought every few months all of his nine title defenses against top-notch opposition over a two-and-a-half year span. Chava was a tremendous counter puncher, with good hand speed and power. It was the instincts to finish hurt fighters and pour the punches on and the pin point accuracy of his counter punches and pin point accuracy when he was pouring on his follow- up shots were truly something to behold.  He also had lead right hands the landed at will (especially in the Danny Lopez fight) that never really gets mentioned but many boxing experts. Chava was a multifaceted once in a generation fighter, with a skill set not yet duplicated in the featherweight division.
In the early morning of August 12th, 1982 when Salvador Sanchez Crashed His Porsche 928, the boxing world lost the best fighter on earth at that time and what may have become one of the best fighters to ever live. The world lost a great man and a humanitarian. Salvador Sanchez left behind a wife and 2 small children 16-month-old Cristian Salvador and 4-month-old Omar and a wife. Every year on the anniversary of his death, Sanchez’s hometown of Santiago Tianguistenco, Mexico, hosts a four-day celebration in honor of his life.
Rest In Peace Champ we lost you way too soon.