If any fighter has a complicated legacy it is Floyd Mayweather. The opinions range from the absolute GOAT to an overrated bum who literally and figuratively ran from opponents.  It was literal running like he did in rematches against Maidana and Castillo or figurative running from every A level fighter he didn’t fight from 130-160 lbs from 1999-2015.

In 2001 Mayweather absolutely destroyed Diego Corrales and it looked like a new legacy was upon us. The Mayweather era was underway. The then Super featherweight took on two more tougher than expected opponents in Carlos Hernandez and Jesus Chavez. After that Floyd said he was weakened and moved up to 135, where he got the scare of his life from Jose Luis-Castillo who Floyd earned a decision over and Lampley said in response to the decision “Not the fight we were watching, Not the fight we were watching”.

Floyd out pointed Castillo in the rematch. However, from that point on something happened to Floyd. He stopped fighting great fighters and stopped taking risks and started taking unthinkable fights. Sammy Sosa’s cousin, Shambra Mitchell, Phillip Ndou and Henry Bruseles. He avoided Zab until, Zab lost to Baldomir, then fought Baldomir. Then had a mega fight set up with Margarito wrapped up with a bow and oh by the way it had his highest pay day tied to it. Mayweather opted instead for Baldomir. After the De La Hoya fight, Paul Williams, Miguel Cotto, Shane Mosley and Margarito were all there and he opted for an over blown Jr Welterweight in Ricky Hatton. Then retired for almost two years and came back against a lightweight in Marquez.  It was a weird 7-year span where Floyd made the Oscar fight that set all types of PPV records at the time did nothing else of note was a major black eye for boxing and made himself a ton of money and more famous than ever.

Whatever your position on Floyd is, and mine is that he’s an all-time great, he’s the best of his era and the rest is arbitrary. That Floyd took strategic steps to protect the zero. Below are six fighters I identified that fought in weight classes that Floyd fought in that could have taken May’s “O”.

Aaron Pryor:
Jr Welterweight bout
Floyd didn’t spend much time at 140, but it was some of his absolute prime. If we took the 28-year-old  Floyd Mayweather that won the Green belt in the weight Class in 2005 by totally destroying and pitted him against the Aaron Pryor that stopped Arguello in 1982.
The Hawk seems to be one of the only fighters that could force Floyd into a TV friendly fight. Floyd would have to use his footwork and 3-inch reach advantage to capitalize on the defense flaws and over aggressiveness that came with that Hawks abnormally high punch output.
Pryor would look to Jump on May from the opening bell. Throwing combinations and keeping Floyd on the defensive. Floyd would get caught with shots like Mosley caught him with it, but with the Hawk, they wouldn’t come one at a time. The Hawk would get the better of little Floyd early on in the first three rounds and put rounds in the bank with pure punch out put. In the middle rounds with Floyd Sr. screaming in his ear “Money May” would loosen up and start to catch Pryor coming in with lead rights and left hooks and able to tie him. Winning a lot of the middle rounds (4-9) with typical lead right hands, movement and tying up/ avoiding Hawks on slaught. The last three rounds would be Hawk time. The Hawk seeing his lead on points slipping away would go balls to the walls finding that second wind firing 80-90 punches per round. Catching Floyd and landing clean shots and winning the last three rounds. Going to the cards. It’s Hawk Time by split decision by the slimmest of margins

Salvador Sanchez
Jr Lightweight Bout
The Tianguistenco, México, Native never moved up from 126 but passed away at the way too young age of 23. It stands to reason having just knocked out the future legend Azumah Nelson, the world had not yet seen the best of Salvador Sanchez. At just 23, having cleaned at 126 let’s make a logical move and move him up to 130 and pit him coming off his knockout of Nelson up against Mayweather at 23 coming off of his amazing knockout of Diego Corrales.
Chava, would start quickly in the first round as he did in the Gomez fight, stunning Pretty Boyd for the first time in his young career.

After the first round, Floyd would slow it down and begin to settle in and fight his fight. Floyd would put some rounds in the bank. However, Sanchez was a really. really good boxer. He had good movement. went to the head and body, and snapped a pretty good jab, Chava threw nice combinations and wasn’t just a come forward stalker. This would work for him and against him at times. Once Floyd settles in during the second and third rounds and he can counter,  Sanchez would have to find a nice balance between aggression and getting caught and taking shots and chasing Mayweather around the ring like Maidana and Castillo did.

After round 3 or 4 there would be a constant give and take through the rest of the rounds of Chava sitting back and pressing Floyd. And Floyd moving and circling and fighting against the ropes. Also as the naturally bigger man,  Floyd may even try to walk Sanchez down which would be dangerous. The versatility the fighters possessed and the contrast in styles would lead to wildly different and controversial scorecards.  At the end of 12 rounds, Sanchez ability to outwork and be the aggressor wins him a really close and hotly debated split decision.

Roberto Duran
Welterweight Bout
This fight could be done comfortably at anywhere from 135-147 so let them enter fully hydrated. Both guys were not particularly big for 147 and walked around near that weight. If we took a 29-year-old version of hands of stone that had just beaten Leonard for the Welterweight title against a 29-year-old Floyd that had just unified some welterweight straps against Baldomir.

I was born in 1983 if you ask people who are generally in my age range if you could see any fight made between any two fighters regardless of era, outside of Tyson and Ali, the answer is usually Mayweather and Duran. Unlike the other fights, I believe Mayweather starts off well in this fight. Money would possess a 6-inch reach advantage and an almost 3-inch height advantage. He would have to utilize that. I think Floyd could put some rounds in the bank landing clean lead rights and jabs. Alternatively, Duran would be busy making “investments in the bank” working Floyds mid section like Floyd has never experienced also being penalized a point for low blows along the way. I think by the middle rounds Floyd is still probably up on points but the momentum has clearly shifted and Duran is really hurting Floyd on the inside and is slowing him down. Midway through the 10th round The Panamanian backs Floyd against the ropes and catches him with a right to the ribs the put Floyd to a knee for the first time in his career officially. Mayweather gets to his feet and survives the round and spends the last two rounds back peddling avoiding Duran by all means. The Score cards are unanimous for the Panamania it’s clear but unanimous for Duran. 114-112 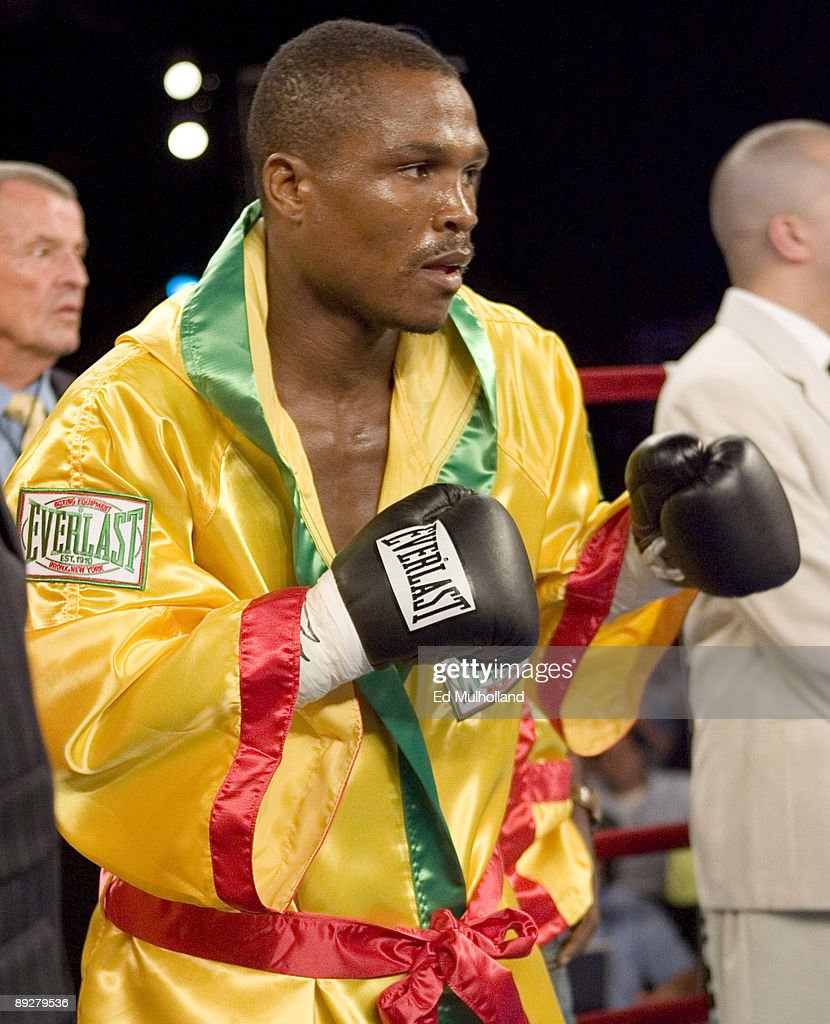 Ike Quartey
Welterweight Bout
I know most of y’all are scratching your heads on this one. But, yes really the “Bazooka’ Ike Quartey. Styles make fights and Quartey’s style spelled disaster for Little Floyd. If you have a great jab and can back that up with defensive responsibility you can have success with Floyd. like De La Hoya showed, Ike had a better jab than Oscar and was better defensively.

Quartey would have to stay busier firing that bazooka of a jab in Mayweather’s face. Which in the early rounds would keep Floyd uncomfortable and his high guard defends well against Floyd’s lead rights and hooks. Quartey takes an early lead after the first three rounds. As they move into the middle rounds Floyd can’t get the Ghanian to chase him or out of his game plan. Floyd adapts and starts firing body shots ( Floyd is an underrated body puncher) in an attempt to get IQ to drop that high guard and land on his chin. Throughout the middle rounds, it’s an excellent even chess match between Ike’s jab and Floyd’s counter shots, which he is landing but not with his normal consistently and is eating a stiff jab.  The final 3 rounds Floyd has to pick up the aggression as he is told he is behind on points. Floyd is forced to step up the action and the two trade Floyd mostly gets the better of it but in round 11 Floyd eats an uppercut from the Ghanian the snaps his neck back, and Quartey piles on a few shots. In the last round, Floyd wins on movement and avoids Ike. But the battle is lost.  Quartey takes a UD in the ball park of 116-112.

Sugar Ray Robinson
Welterweight Bout
Using  a Welterweight version of both fighters a 1942 version of the Original Sugar Ray and a 2007 Floyd Mayweather
The Best Ever and the Self-Proclaimed Best Ever. If Floyd was half as good as he told everyone he was he’d be Sugar Ray. This fight would need no hype but Floyd would certainly sell it. The Only question, where at? Mecca of Boxing MSG, or Vegas. As far the fight itself? It would go like this.

Floyd would have a little success in the first round or two sticking Robinson with counter shots as, Sugar Ray looked to start the fight aggressively. Through the next couple of rounds, it would turn into a classic boxing match with Robinson being slightly more the aggressor. The fights competitive with a slight edge to Ray due to his power.  The fight would stay a give and take chess match through about round 7.  Robinson sees Floyd breaking down a bit and begins to press and land more power shots that really start to break money down.  In the 8th round, Floyd and Ray throw wide right hands at the same time and Robinsons lands first and drops Floyd. Mayweather beats the count but Robinson jumps on him landing big shots with Floyd unable to tie up, the beat down is too much and the fight is waved off midway through the 8th.

Welterweight Bout
Take the 2007 version of both fighters. Williams was coming off the UD over Margarito and Floyd had his, at that time career defining victory over Oscar, there was zero reason for this fight not to be made at that time.

This is the one fight I just couldn’t see how Floyd could win. Which is why Floyd Sr said he should stay away from and why it didn’t happen when it clearly should have:
From the opening bell, Williams would “punish” Floyd, cutting off the ring on Floyd using his length and 7-inch reach advantage. Floyd would have nowhere to run and no response to the output and Ratatat style of “The Punisher”.  Floyd would have some moments with counter shots and some body shots on the inside, but Williams would catch him on his way out every time. The range and volume would be too much for Floyd.  Williams could continually walk Floyd down with his natural length, Floyd basically has no counter each round kind of looks like the same. Williams out works Floyd, who can’t land from the outside or get inside. Paul ”The Punisher” Williams takes a fairly wide UD with scorecards of 117-111 twice and 118-110.