This past weekend was a great weekend for fight fans. Really! It was filled with entertaining meaningful fights. True fight freaks were glued to their sofas and casuals didn’t realize a single fight took place.

The fight filled weekend got off to a great start with ShoBox on Showtime.  My favorite boxing show.  It consistently delivers entertaining fights and fighters who go on and achieve accolades at greater levels. It took place in Miami, Oklahoma on Friday. Three ABSOLUTE showstoppers stood-out. Including a nail bitter between a pair of super Bantamweights.  Adam Lopez and Glenn Dezurn Jr. Lopez was the aggressor, the busier fighter. Lopez out fired and continued to move forward, Lopez looked to be wearing down Dezuan as they moved into the last two rounds of the scheduled 8 rounder. Dezuran seemed at times to not know if he wanted to box at range with his jab or on the inside.  He may have been able to earn a draw by rallying with body shots and pulling off the last two rounds with powerful body shots. This is a fight that gets little fan fare but a rematch would certainly be appropriate and 10 rounds would certainly be entertaining.

The Card also featured journeyman B-Side fighter Rolando Chinea who built a name for himself by upsetting  O’Shaquie Foster as well as dropping an atrocious decision to the highly touted and unbeaten prospect Ismail Muwendo on a Terence Crawford Card in 2015 in Dallas, Texas.  This time was able to pull THE  MASSIVE upset against Kenneth Sims Jr. who at 23 was being moved along quickly for a title shot in the next 12-24 months  and drawing comparisons to Paulie Malignaggi. Sims tried to set the tone with his speed and movement and had some success early but Chinea stayed in his chest and cut the ring off  on him, Sims stayed busy in the late rounds, but his questionable power seemed to have nothing left in the late rounds and he seemed completely fatigued from the relentlessness of Chinea. It’s Rolando Chinea the Puerto Rican native who should now be considered in legitimate conteder status and the A side of a big money fight.

In the main event, hot shot prospect Ivan Baranchyk is about in line for a big pay day or even a title shot. He could have chosen to take on a chiny opponent who he could have knocked out or some cupcake tailored made for him.  Instead, he took on an undefeated opponent to test himself. He didn’t look great,  however, he won every round and outclassed a pretty decent unbeaten opponent. Ivan Baranchyk reminds you so much of a smaller Arthur Abraham for better or for worse. The head movement the way he throws he doesn’t throw straight punches and of course the power. I think a match up in the UK with Jack Catterall would be a great barometer test for Baranchyk. I would favor Baranchyk.

On the weekends bigger Cards.  Boxing returned to Long Islands Nassau Coliseum for the first Time Since Mike Tyson demolished Steve Zouski. We got awesome knockouts. First, on the East Coast, Sir Marcus Browne of Staten Island looked like the second coming in overwhelming native  Long Islander Sean Monaghan in front of his hometown crowd. Sir Marcus looks ready to take on either Krusher or Adonis today and we will see about SOG after that. In the Main Event, there were, even more, fire works as Robert the Ghost Guerrero and Omar Figueroa Jr. traded firebombs, hand grenades, and haymakers for approximately seven and a half minutes. Danny Garcia who lent his hand as a commentator said that  Figueroa as a sparring partner is a slow starter and will feel Guerrero out for about three rounds. He was wrong.  He knocked the not so invisible ghost down fives times and finally for good in the third round. In this memorable return to the new and improved Nassau  Coliseum

In the final card, HBO’s’ triple header out on the West Coast,  Fellow Long Island Native Joe Smith Jr didn’t fare much better out west. He squared off with highly skilled Sullivan Barrera. Barrera has a huge edge in skill and Smith Jr, had a noticeable advantage in power. This was obvious from the opening round.  Berrera outclassed the Long Islander from the jump off and dominated every moment except for one when Smith Jr, landed a decent left hook to the top of the Cubans head that sent him tumbling to the Canvas. Berrera recovered and won the fight easily. There is so much about Joe Smith Jr, that reminds you of Irish Mickey Ward, he looks like Mickey Ward, his distinct accent, his left hook, his full-time union job. Smith can establish a big fan base but he needs to knock someone out and keep himself relevant he will need some clever matchmaking and an Arturo Gatti. 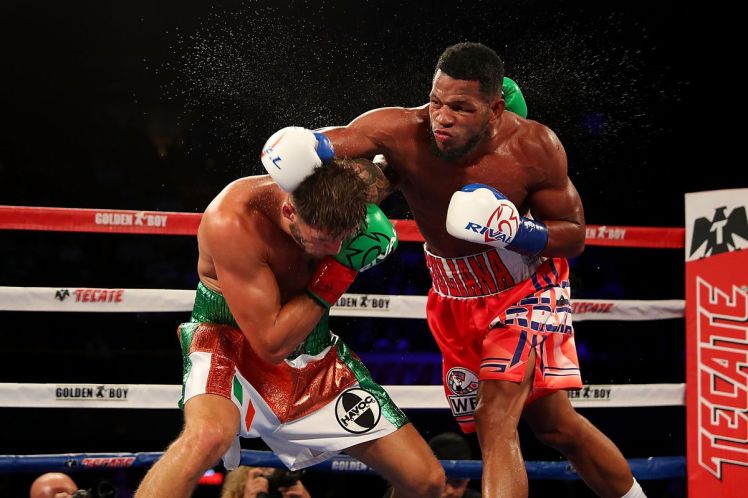 In the Next Co feature, a pair of 130 pounders Jezreel Corrales and  Robinson Castellanos put on a show where both fighters hit the canvas.The Panamian proved not to be invisible being sent to the canvas twice. Corrales was making his highly anticipated US debut and earned a victory in an ultra close and competitive struggle. In what was a fast moving competitive fight. Being dropped twice in the fourth seemed to be a wake-up call for Panamanian Champ. Corrales started picking up the pace in the fifth and sixth, looking to change the tide as Castellanos was surging strongly with his work rate. During the seventh, both boxers were landing well but Corrales dropped Castellanos with a good left hand near the end. They went to war in the ninth, both trading a lot of huge lumber. During the start of the tenth round, there was a bad clash of heads that opened up a very bad cut under the right eye of Castellanos.  The doctor took a look at the cut and quickly stopped the fight as the blood was raining down the face of Castellanos. A rematch should be immediately mandated as the scorecards were so close. Robinson Castellanos who has done in the right way. Has overcome so much, he has come from nothing too upsetting Yorikis Gamboa and being so close to a world title. He deserves a chance to finish this fight. The fighter known as Robin Hood started his career off with a record of 5-8 and had been knocked out 5 times, and from that humble beginning, he was within a whisker of a world title. To be honest I had the fight even 94-94. It looked like perhaps Castellanos moment had passed and that Corrales had seized control with better movement and the better jab and was going to with the decision, but they were still trading and Corrales had been dropped multiple times and hit with heavy lumber. This is boxing a sport where a career opponent who lost 7 of his first 10 fights floored an unbeaten champion twice and had him on the verge of defeat deserves better and deserves. a chance to finish his unfinished business and trust me the fans won’t mind seeing it again
In the main event, Miguel Berchelt dominated a very game and tough Takashi Miura to retain his  130lbs WBC belt.  Berchelt floored the tough Japanese challenger at the end of the first round and fought nearly flawlessly against a really good opponent. Most were expecting an all out slugfest but Berchelt was able to land clean and mostly avoid the dynamite left hand of Miura. Miura did have some success to the body of the tough Mexican champion at times.  Berchelt was able to sustain the attack and fight through it in stride. Berchelt showed great strides, resolve and to be much more than just a puncher. Entering the fight many thoguht he had just a punchers chance against Lomachenko. After the 12 round domination of Miura, he appears to be much more of a live dog against the Ukrainian. 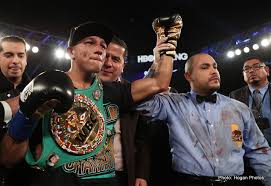 None of the fights  this past weekends are going to make an appearance on SPORTSCENTER. Our co workers aren’t going to be talking about it around the construction site or the water cooler. But this was an exceptionally exciting week, a knockout week for boxing. If boxing can advertise itself and put cards out like this, it will be the most popular sport in the world.