Superheroes never really die, they win some battles and lose some but they never die. They always come back. As a youngster, I had to watch the Superman cartoon series before school every day and every Saturday mornings  I had to watch one of the Superman Movies. As I got older and childhood turned into adolescence. I turned to another superhero. A Friday night, December 15th, 1995 an impressionable 7th grader was introduced to another superhero.  A bruised and battered Arturo “Thunder” Gatti fought through two closed eyes to out-point Tracy Haris Patterson, in The Mecca of Boxing, MSG, in my hometown of NYC.

Just three months later Arturo Gatti became my first ever sports hero when a floored, bloody, bruised and swollen-eyed Gatti completed the most spectacular come from behind knockout I had ever seen in my life. Gatti didn’t just become my sports hero that day he became like Superman. A comic book hero and he made me fall in love with boxing above all other sports. Being knocked down and left for dead by the tough Dominican challenger Wilson Rodriguez. Gatti somehow rose to his feet and by the fifth round floored Rodriguez and by the sixth finished him off with a KO of-the-year Fight-of-the year left-hook to the head. Thus the legend was born. 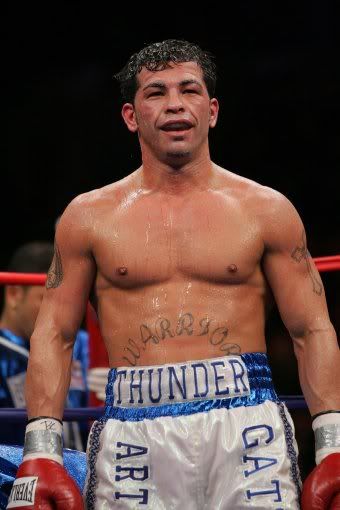 Boxing is a sport that is completely unique, it draws us in the same way the gladiators drew the Romans in. The word warrior is innately linked to professional prizefighters, they carry a certain warrior spirit that is uncommon, a warrior like instinct. The word warrior is tattooed on the mid-section of Arturo “Thunder” Gatti known as boxing Blood and Guts Warrior. Not too many fighters define this warrior spirit like Gatti the real-life Italian Stallion.

After the stunning Rodriguez knockout, Gatti’s legacy continued to grow and his superhero legacy reached a different stratosphere. His fights were better than Hollywood.  He went on and had another spectacular fight-of-the-year knockout victory over Gabe Ruelas and came up on the short end of all time memorable slugfests against Manfredy, Ivan Robinson twice and De La Hoya. All of these life and death losses never  harmed or negatively impacted Gatti’s legacy.

All of these comic book type wars Gatti engaged in, set up his legendary trilogy with “Irish” Mickey Ward.  I was a freshman at Hofstra in NY, it was the weekend before finals. I had a roommate from Massachusetts who had no interest in Boxing at all but tuned into this fight and instinctively rooted for the fellow  Bay Stater. By the end of the second round, I had people pouring into my dorm glued to the screen, no one got up to go to the bathroom or even grab a beer. We tried our hardest not to blink. And oh yea, no one was really rooting for anyone anymore, we were all just in amazement of what we were witness to. The greatest fight ever Gatti-Ward I. I had a room full of casual and non-boxing fans in love with boxing. This is what “Thunder” did he took boxing from obscurity and took it the center of every discussion of every water cooler of every office and every construction site everywhere. He made fans out of people who had no interest in boxing. He garnered respect and broadened the sport.

Gatti himself like his heart and fan base knew no boundaries. The Italian-born and raised-Canadian olympian- Jersey-based brawler. Arturo “Thunder” Gatti, there was never a fight too dangerous, never a chance in the ring too risky, and never an opponent too daunting. I was in Atlantic City that hot Saturday night the 14th of July when Gatti was nearly sent through the ropes by Alfonso Gomez.  Bummed out we knew it was the last time Gatti would step into the ring, we walked down to Casars  Atlantic and actually bumped into a member of Gatti’s entourage who my buddy struck a conversation up with.  He assured us the champ was ok and was at the hospital getting checked out, but he had announced his retirement. That was expected but sad. We wouldn’t see our superhero again.

The idea of greatness if often arbitrary and can best be summarized the same way Civil War General Lew Wallace generalized beauty when he said “Beauty is altogether in the eye of the beholder”  Gatti’s style and heart has not been seen since, Thunder’s introduction in the hall of fame in 2013, had some fight fans scratching their heads, some having a “you’ve gotta be kidding me” moment and others, like myself with an ear to ear smile.

The news that would come two years later on a hot  Saturday, July afternoon. Well, nothing could prepare us for that. The 37-year old Gatti was killed in Brazil, it almost didn’t seem real. Superman was dead? How? He was a Superhero and Superman never dies.  This July 11th marks the 8th anniversary of Gatti’s tragic and controversial death. As for me and my family, Gatti lives on. At least in namesake, if nothing more as my youngest name bears the name “Gatti”